Our Resistance: An Interview With Rafael Cancel Miranda

Rafael Cancel Miranda is an iconic figure in his beloved Puerto Rico. Coming from a staunch nationalist family background, Cancel Miranda has become the elder statesman of the Puerto Rican independence movement, providing guidance and at times fiery motivation. His longevity, involvement, and knowledge of Puerto Rican politics and its legendary leaders make him a central figure to understand when examining the question of Puerto Rico's independence.

Rafael Cancel Miranda is an iconic figure in his beloved Puerto Rico. Part of the nationalist commando attack on the U.S. Congress in 1954, he served 25 years in prison with his comrades until pardoned and released by President Carter in 1979 amid intense international pressure. Coming from a staunch nationalist family background, Cancel Miranda is now the elder statesman of the Puerto Rican independence movement, providing guidance and at times fiery motivation. Though living in a society politically divided among supporters of statehood, Commonwealth, and independence, Cancel Miranda is consistently approached by people on the street of all political persuasions who express admiration and respect. His longevity, involvement, and knowledge of Puerto Rican politics and its legendary leaders make him a central figure to understand when examining the question of Puerto Rico’s independence.

What is your overall impression of the book A plena voz: nuestra resistencia 2005–2010?

The book demonstrates how the FBI has attacked the Puerto Rican independence community and demonstrates that this country has nevertheless continued its struggle, that it has not allowed itself to be intimidated. The book clearly shows that there is persecution by the so-called FBI, by the so-called U.S. Federal Court, and by the U.S. federal agencies, but that we are still on our feet. We hear the revolutionary voices of the struggle through the author.

In the book the former Puerto Rican Armed Forces of National Liberation (FALN) political prisoner Elizam Escobar notes that “nationalist activists and intellectuals tend to have a more comprehensive and critical view of nationalism than those cosmopolitan intellectuals who depend on the institutions of the [U.S.] metropolis.” 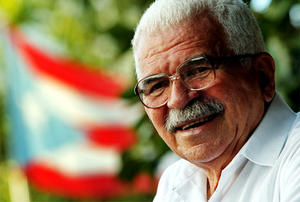 González Cruz asserts that Puerto Rican revolutionary nationalism has sustained an effective cultural and political resistance through the use of propaganda armada (armed struggle), political participation in the diaspora, and capturing the attention of the international community at various forums. What thoughts can you share on this?

The stronger our Boricuas are in U.S. exile, the stronger our struggle. As [pro-independence activist Juan Antonio] Corretjer put it, we are Puerto Rican even if born on the moon, and there are Puerto Ricans living in Chicago, New York, or any part of the United States, and they continue being Puerto Rican—this is their homeland, we are one nation. The colonial question has forced many to leave without really wanting to. One of the reasons I am talking to you here in my home in Río Piedras is thanks to those Boricuas in the United States from the FALN who in their communiqués demanded the freedom of the five nationalists, and I am one of them.

The book speaks about Filiberto Ojeda Ríos’s belief that revolutionary violence is a response to state violence, about conquering state power, and that this implies a transformation of the country so that everyone would be able to participate in the democratic process. What thoughts can you share on this?

First, Ojeda Ríos was a man of peace, but of peace with justice. If someone violently attacks your loved ones, then that gives you the right to defend them with violence by any means necessary, right? But in this system, the only ones who have the right to use violence are the powerful and their lackeys, not the people. When the people defend themselves, they are terrorists, but the powerful can commit all kinds of abuses against the people, like recently the clubbing of the young students [protesting neo-liberal education policies] in Canovanas, mere high school kids. But that is not considered violence by the state; that is just “democratic violence.” I agree with Ojeda Ríos that revolutionary violence is a product of reactionary violence—the violence of the powerful who want to dominate and exploit the world. I also agree with his call for the unity of all our patriotic forces. The more united we are, the stronger we are; the more divided we are, the weaker we are. Ojeda Ríos constantly called for the unity of our patriotic groups. It is not a whim but a necessity if we wish to save ourselves as a people.

What is the major obstacle to obtain that unity?

Colonialism itself. Colonialism creates frustration and confusion. It’s difficult to defeat because it is a creation of the very same colonial system that divides us. Sometimes they install people within the movement to divide us. Sometimes there is frustration, but we should never get frustrated because we are fighting for something worthwhile. We must see ourselves as brothers. Fidel [Castro] recently said something that I enjoyed very much: “We can be friends although we have our differences.” Sometimes we forget that and we become our own worst enemies instead of fighting the real enemy.

Today they have even more methods to control even our psyches through the almost complete control of the media. They want to transform the schools into nests of yanqui assimilation so that people lose their identity as Boricuas. They are de–Puerto Ricanizing us. But in spite of 114 years of colonialism, and all of this, there are still young people who struggle. I have said it a thousand times in different countries I have visited, like Nicaragua, Mexico, Guatemala, and the Dominican Republic. I am proud of my people because the struggle continues even though they have come at us with everything in order to decimate us as a people.

The book discusses several victories won throughout the modern history of Puerto Rico’s independence movement, including the popular struggles to end the U.S. Navy’s use of Vieques island as a bombing range, to release political prisoners, to end corruption in the pro-statehood party, and to protect the Valley of Lajas from its use as a Navy radar site. What connection do you see between these victories and the assassination of Ojeda Ríos and other actions they have taken against the people?

This is what the U.S. government always does when they see a people who are rising up. They try to terrorize them. They have seen that there have been victories and that thousands of people are willing to march for the freedom of the prisoners. The Vieques campaign demonstrated that people were not afraid to struggle. So they had to use what they always use: the mafia, the gun, to instill fear. But despite all they have done to terrorize the people, this country is no longer terrified.

There have always been people who struggle. They saw how the students were willing to confront them and their clubs. One day I went over to the student strikes, and the police were about to assault them. I told them, “Let’s leave, because they are just going to club your heads, and you have nothing to fight back with.” But the students showed that they had courage. [Puerto Rican independence leader] Don Pedro Albizu Campos once said in front of 500 Puerto Ricans, “With you, we have enough to free our country.” And it’s true, with 500 very prepared men and women who are committed to the struggle for dignity and liberty, it could be done. Remember that the enemy is neither invincible nor omnipotent. It can be done, and Ojeda Ríos knew this. And González knows this too. In his book, I picked up that he knows this as well. That it can be done.

Ojeda Ríos talked about the necessity for a different campaign, saying that the system of political parties was no longer functioning. And he talked about the need to wage another type of campaign. What do you understand that other campaign to be?

I remember an expression used by Don Pedro: “If elections were useful for the Puerto Rican people, the yanquis would prohibit them.” Through these elections they have us fighting among ourselves. I have never participated in a colonial election, but I respect those who in good faith believe that in that way they are helping. They are not my enemies. This is what we must see, although we have differences. You know in everything there is a balance if we really want to find it and if don’t then we blind ourselves into thinking that we have the magic formula. No one has the magic formula. If we had it, we would have been free a long time ago, because courage we have had. There are different ways to struggle—the thing is to struggle, and to respect each others’ differences.

Juan Antonio Ocasio Rivera is a Puerto Rico–based activist, social worker, and professor. He has written for several online publications, including CounterPunch, Upside Down World, and New York Latino Journal, and was active in the New York–based All of New York With Vieques.

For more on this subject read Resistance Struggles for National Salvation in Puerto Rico.