The End of the Chávez Era?

On December 8, Venezuelan president Hugo Chávez announced that his cancer has returned. Unlike past announcements, this time around Chávez publicly acknowledged that his odds of survival may not be great. Chávez took the astonishing, and quite unprecedented, step of naming a successor, foreign secretary Nicolas Maduro.

What happens when someone larger-than-life dies? On December 8, Venezuelan president Hugo Chávez announced that his cancer has returned. Unlike past announcements, this time around Chávez publicly acknowledged that his odds of survival may not be great. Chávez took the astonishing, and quite unprecedented, step of naming a successor, foreign secretary Nicolas Maduro. This amounts to Chávez’s first admission—at least in public—that Venezuela’s future may not include him. 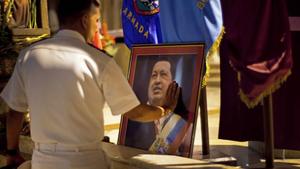 This prospect has been lurking in the shadows since Chávez’s 2011 announcement that he had cancer. But until now, Chávez had refused to give such thoughts any credence. The nature of Chávez’s illness remains a secret. Apart from Chávez, his doctors, and a few close advisors, it is unlikely that anyone knows the full severity of Chávez’s cancer. Chávez has suggested that he may not make it through his current term, which ends January 9. The exact timing of the end remains a mystery, but one that may be resolved within weeks or months rather than years. But it is clear that Chávez’s days as president are numbered.

Does this mean that the Chávez era is, or will soon be, over?

The answer to this question hinges, in part, on the question of who Venezuela’s next president will be. In the likely event that Chávez dies or leaves office before the fourth year of his new six-year term, a presidential election would be held within 30 days. Given their chronic inability to defeat Chávez, Venezuela’s opposition understandably relishes the chance to face off against another opponent. Chávez has made his opinion of who this should be crystal clear. “If something were to happen that would incapacitate me,” Chávez told supporters, “My firm opinion, as clear as the full moon—irrevocable, absolute, total—is that you elect Nicolas Maduro as president.”

Maduro is seen as a faithful follower of Chávez, and one of the more “radical” members of Chávez’s inner circles, making it likely that a Maduro presidency would mean the continuation of many of the policies of the Chávez years. It is likely that Chávez’s departure will lead to some infighting amongst his supporters. But the prospect that a Maduro presidency could provide greater space for internal dissent and questioning should be seen as a welcome development, given that these were often in short supply due to Chávez’s outsized personality and limited tolerance of dissent by his supporters.

For this to happen Maduro would have to prevail against the opposition in a new election. The prospect of a new presidential election—this time without Chávez—heightens the significance of Venezuela’s gubernatorial election scheduled for December 16. Henrique Capriles, the man Chávez defeated in October, is running for re-election as governor of Miranda state. Capriles lost Miranda in the October 7 presidential election, but by less than 7,000 votes (less than 0.5%). He is running neck-and-neck with Elías Jaua, who until recently served as vice president under Chávez, and who is seen as a strong candidate. If Capriles wins on Sunday, he would likely retain his position as the leader of Venezuela’s opposition. If he loses it will probably set off an ugly scramble amongst those seeking to be the new opposition standard bearer.

Maduro would clearly benefit from this second scenario. But if Capriles wins re-election and retains his place as the (relatively unquestioned) leader of Venezuela’s opposition the situation would be quite distinct. While Capriles lost to Chávez by 11%, the 6.5 million votes he won were the most that the opposition has ever obtained and far more than what Chávez’s United Socialist Party of Venezuela (PSUV) won in the 2010 legislative election. Maduro’s chances of victory against Capriles are far from certain. A poll conducted in April showed that Maduro’s support—as a potential presidential candidate—was just 12.69% compared to 46.13% for Capriles. Chávez’s backing of Maduro is likely to change this, potentially quite significantly. It is also likely that Maduro would receive a boost from the profound emotional outpouring that Chávez’s death would trigger amongst his supporters. Whether this would allow Maduro to defeat Capriles is not, however, clear.

It is hardly surprising that most of the commentary regarding what a post-Chávez Venezuela might look like has focused on the question of presidential politics. But it is a grave mistake to think that the future of Venezuela depends solely on the identity of its president. To do so is to dismiss the profound significance of the social and political changes that Venezuela has experienced over the past 14 years. Contrary to mainstream media portrayals, the reason Chávez has remained popular over the years—and why he won an unprecedented fourth re-election in October with 55% of the vote—is not because he is a demagogue. Chávez’s popularity stems from the material and symbolic benefits his administration has provided ordinary Venezuelans year after year.

The material benefits provided to Venezuelans since Chávez came to power are significant. Since Chavez came to power Venezuela’s poverty was cut in half, and millions have benefited from government-provided healthcare, education, and subsidized food. Millions more have benefited from government housing, and various other forms of economic and social assistance. There is little doubt that Nicolas Maduro would continue Venezuela’s famous social missions. And it is significant that Capriles promised to continue these programs if elected president. Venezuela’s missions provide benefits that are an important legacy of the Chávez era that will not end the moment that Chávez ceases to be president.

The reason for this has less to do with the goodwill of Venezuela’s political leaders (including Chávez himself). Instead it is related to the second achievement of the Chávez era, which is arguably of much greater significance than the material benefits just discussed: the emergence of a mass movement of people who are deeply committed to radical social, economic, and political change. The Venezuelan state has played a key role in fostering this movement. And it is closely tied to Chávez’s party, the PSUV. But fortunately Venezuela’s popular movement transcends the limits of partisan politics and state power.

This is clearest when looking at the thousands of social organizations that have been created during the Chávez era. In addition to health councils, mother’s clubs, and urban land committees, the most important of these are the thousands of communal councils created since 2005. Despite government (and opposition) attempts to use these councils for overtly political ends, many councils include both Chavistas and non-Chavistas and operate with a high degree of autonomy vis-à-vis political leaders. This autonomy has been crucial to the success of some of the most impressive institutional experiments of the Chávez era, such as participatory budgeting. As my research shows, these experiments have often succeeded despite (rather than because of) the efforts of Chavista political officials. This belies the image of a movement that is dependent upon one man. And it underscores a point of fundamental importance. No matter who is president, the popular movement that has emerged during the Chávez era will remain.

Gabriel Hetland is a doctoral candidate in sociology at the University of California, Berkeley. His research focuses on participatory budgeting in Venezuela, Bolivia, and the United States.