On a cool morning in the central plaza of the Metropolitan Autonomous University in Mexico City, a group of volunteers wearing identical black t-shirts stands under a small tent. They are part of Jornaleros Safe, a project funded by several Mexican and American organizations whose members have spent the last year researching the exploitation of Latin American workers contracted for agricultural jobs in the United States.

On a cool morning in the central plaza of the Metropolitan Autonomous University in Mexico City, a group of volunteers wearing identical black t-shirts stands under a small tent. A line of student’s forms around them by a large sign which reads, “Ask Here About Visas.”

The volunteers are part of Jornaleros Safe, a project funded by several Mexican and American organizations whose members have spent the last year researching the exploitation of Latin American workers contracted for agricultural jobs in the United States. 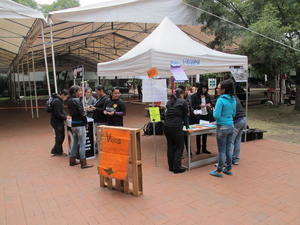 The Jornaleros Safe team at UAM.

“Today we’re teaching students the unfair conditions that await many Mexicans who seek legal work in the United States,” said Abril López, a volunteer with Jornaleros Safe, as she handed out playing cards and a pile of fake dollar bills to several students. Jornaleros is the Spanish word for "Day Laborer." The project’s name, Jornaleros Safe, a mix of both English and Spanish, is indicative of a problematic system of contractual labor that crosses borders and affects both the U.S. and Mexico.

Jazmin Reza, Communication’s Coordinator for Jornaleros Safe, recently designed a game where students play the part of Mexican workers who are recruited for contract jobs in the U.S. on H-2A agricultural work visas. Students are given play money and then pick up cards which tell them what to do next. It’s a social justice oriented version of Monopoly where there are no winners.

“Want to play?” López asked me.

“Sure,” I said, stepping beside two other students.

In 2010, over 90% of all foreign workers contracted to work in the U.S. agricultural industry came from Mexico. The game teaches students about the weaknesses of U.S. regulations meant to protect these workers who each year depart to the United States from points all over Mexico.

In order to hire foreign laborers, also known as guestworkers, U.S. agricultural businesses must first submit an application to the Department of Labor, certifying that there aren’t enough American workers to fulfill their hiring needs. Most American businesses that employ guestworkers rely on recruiters in foreign countries who often charge potential workers exorbitant fees to obtain work in the United States.

“Okay, let’s start,” said López, fastening a sign around her neck that read, “Recruiter,” before handing us each different quantities of fake money, a deed to an imaginary house, and our first card.

“What do your cards say?” she asked. 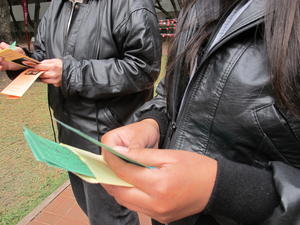 “There’s a recruiter in my town offering work in the United States, but I had to pay ten dollars just to be put on the waitlist to be considered for a job,” said a bespectacled girl, named Maria, to my right. “That’s over half my money!” she exclaimed.

“Mine says the same,” I said, reading from my card and handing López ten bills.

“My card says that I didn’t have enough money to be put on the waitlist,” said a tall student with a scruffy beard, named Gerardo, “so I gave them the deed to my house as collateral until I could come up with the funds!”

“Alright, pay up,” said López as we handed her our money.

During their research, Jornaleros Safe spoke with some workers who paid to be put on a waitlist by recruiters but were never offered employment. Although some Mexican agricultural workers report having good experiences with their recruiters and employers, Jornaleros Safe found that 95% of the workers who they surveyed suffered some kind of labor rights violation, either during the recruitment process or while working abroad.

Under U.S. Federal law, foreign laborers contracted to work on H-2A visas are entitled to receive free housing, at least three-fourths of the hours promised in their contracts, worker’s compensation, and reimbursement for travel costs from the worker’s home country. But, as the other students and I were about to learn, these laws mainly exist on paper.

“Here’s your next card,” López said, handing us each a different colored piece of paper.

“My boss won’t pay for my travel expenses,” I read. “So I’ve decided to save what little money I have by handing over the deed to my house to the recruiter so he will lend me the money.”

“Thank you,” López said, snatching the deed from my hand and stuffing it in her pocket.

“My card says that I’ve arrived in the U.S. and signed a contract, but it’s in English and I can’t read it,” said Gerardo.

“Maria, what does your card say?” she asked.

“I just arrived in the U.S. and my boss is holding my passport,” Maria said. “Without that documentation I’m practically illegal.” 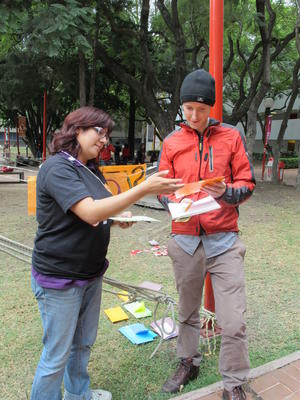 “Okay, now it’s time to get to work,” López said, pointing to several lengths of clothesline strung between two nearby trees. At least one hundred cardboard cut-outs of tomatoes were stuck to the lines with masking tape. López handed us each a new card instructing us to pick a certain number of tomatoes in under thirty seconds.

“Ready, set, go!” López yelled. Maria and Gerardo dashed off towards the clothesline. I followed after them and started picking cardboard tomatoes, the masking tape sticking to my clumsy fingers. “30 seconds! Time’s up!” López said.

I had only picked fifteen tomatoes, less than the twenty that my card has asked for. Maria and Gerardo hadn’t made the day’s quota either. “Alright, time for your last card,” López announced.

“I got sick from exposure to pesticides,” read Maria, “so I went to the hospital and the boss deducted 30% of my pay for the medical expenses!”

“There was a drought this year,” I said, reading from my card. “The boss said that because the crop was so bad they couldn’t pay us.” When I finished, we all looked toward Gerardo.

“I kept track of my hours, how many kilos of vegetables I picked, and the number of days I worked,” Gerardo said. “I demanded my boss to pay me in full for the hours that I worked. They paid me what I had rightfully earned, but now I’ve been put on a blacklist and can never work in the United States again!”

“This is messed up,” said Gerardo. “I started with fifteen dollars, but now I only have three left. And I lost my house.”

“I have ten dollars left, but no house,” I said, counting my remaining bills.

“I paid ten just to leave,” said Maria, “but after everything I only have nine dollars left.”

“All of the outcomes used in this game came from real stories that Jornaleros Safe documented during their research with workers,” López informed us. “These are all things that really happen.”

As the students drifted off to class, I stopped to help López put the cards away. “I like this game because it’s a portable educational tool,” López said. “It shows students how few choices many of these agricultural workers have. Low wages in Mexico now force many people to make a living through organized crime. Those who leave the country on H-2A visas to work difficult, low-paying jobs in the United States are trying to do the right thing while also supporting their families.” “But unfortunately,” she added, “oftentimes this agricultural work is another form of organized crime.”

Levi Bridges is a Fulbright grantee in creative writing based in Mexico City. His work primarily focuses on documenting the life narratives of Latin American migrant workers who have returned home after seeking work in the U.S. To read more about his Fulbright project visit www.bridgesandborders.com.