Reading Tea Leaves in Venezuela: How to Interpret the Results of Sunday’s Regional Election

Regional elections do not usually attract international media headlines. But Sunday’s gubernatorial race in Venezuela was not a typical regional election. This was the first time since Chávez came to power in 1999 in which he was unable to actively campaign in an election.

Regional elections do not usually attract international media headlines. But Sunday’s gubernatorial race in Venezuela was not a typical regional election. It was the first election since Hugo Chávez’s impressive re-election victory in October. More importantly, it was the first electoral contest in Venezuela since Chávez announced that his cancer had returned and took the unprecedented step of naming a preferred successor, Vice President (and former foreign minister) Nicolas Maduro. 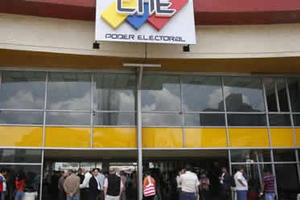 This was also the first election since Chávez came to power in 1999 in which he was unable to actively campaign. Following surgery in Cuba last Tuesday, described as being “complex,” “delicate,” and “successful,” Chávez watched the election from abroad. He was not alone. Sunday’s election was widely anticipated, since it provides a window into what a future presidential election might portend. As has been widely discussed, this is a likely prospect, given Chávez’s delicate health. Should Chávez be unable to continue in office at any point within the first four years of his new term (set to begin January 10), the constitution mandates a new election within 30 days.

So what is the significance of Sunday’s election with respect to the balance of political forces in Venezuela?

Chávez’s United Socialist Party of Venezuela (PSUV) did quite well, winning 20 of 23 governorships. This was an improvement over 2008, when the PSUV won just 17 governorships. Due to several defections over the past four years, prior to the election the PSUV controlled only 15 of 23 governorships. This means that the PSUV picked up five states—Zulia, Tachira, Carabobo, Monagas, and Nueva Esparta—previously controlled by the opposition. Zulia, which is Venezuela’s most populous state and was previously viewed as one of the opposition’s strongholds, is the most impressive prize and the hardest loss for the opposition.

In addition to the impressive number of states that the PSUV picked up on Sunday, the party’s margin of victory was quite substantial. In all but two of the states it won, the PSUV’s margin of victory was greater than 5%, and in more than half the PSUV won by over 10%. In nine states the margin exceeded 20%. And in four states, the PSUV won by resounding margins of 35% to 62%.

The opposition managed to hold on to just three states. The most significant opposition victory occurred in Miranda, where Henrique Capriles won re-election. This was the most widely anticipated race of the election, since Capriles was the opposition candidate in October’s presidential election. Capriles’s victory is likely to secure his place as the opposition frontrunner. But while Capriles survived on Sunday, his margin of victory was less than spectacular. He defeated Elia Jaua, previously a vice president under Chávez, by a margin of 51.8% to 47.8%. This is less than Capriles’s margin of victory in 2008, when he won Miranda by a 53%-46% margin. It is also worth noting that the number of votes—583,660—Capriles obtained on Sunday is almost identical to the 583,795 votes he received in 2008. This does not suggest the type of strong momentum Capriles would need to overcome what now appear to be quite daunting odds in any future presidential election.

The other significant opposition victory occurred in the state of Lara, where Henri Falcon defeated the PSUV’s Luis Reyes Reyes 54% to 46%. As in Miranda, Falcon was re-elected. But his margin of victory was substantially lower than the 73.5% he received in 2008. The reason for this is that in 2008, Falcon ran with the PSUV. But in 2010 he left the party, joining the opposition a few years later (following an unsuccessful attempt to forge a “third way”). Falcon has been considered a possible presidential contender in the past, but given Capriles’s victory, this is unlikely to happen for the time being.

In both Miranda and Lara, the opposition margin of victory was relatively slim compared to the PSUV’s margin elsewhere. The only resounding opposition victory occurred in the state of Amazonas, where the PSUV lost by over 20%. All in all, the PSUV has reason to be quite content with its showing on Sunday. In addition to consolidating the party’s control over regional government throughout the country, this bodes quite well for the PSUV in any future presidential election.

But it is important to realize why the opposition won in Miranda and Lara. Lara's incumbent oppostion governor, Henri Falcon, faced off against former Chavista governor, Luis Reyes Reyes, who governed Lara from 2000 to 2008. Capriles faced Elias Jaua but may have benefited from voters' memory of the last Chavista governor of Miranda, Diosdado Cabello, who governed from 2004 to 2008. Between 2009 and 2011, I spent eight months conducting dissertation research in Lara and Miranda. During this time, I learned that grassroots Chavistas were far from happy with Reyes and Cabello. Both men are seen as unimpressive (at best) and as corrupt and buffoonish (at worst). During his time in office, Reyes Reyes opposed efforts by grassroots Chavistas to construct participatory democracy in Torres, the second largest municipality in Lara.  And Cabello’s mediocre performance in office is widely seen as the reason he lost to Capriles in 2008.

Capriles and Falcon, by contrast, are viewed as competent administrators (including by some Chavistas). They are part of a new generation of opposition leaders who proclaim their intentions to keep “what works” in Chavismo while scrapping the rest. It is worth noting that Capriles’s party, Primero Justicia, has implemented impressive participatory budgeting in the Miranda municipality of Sucre, which it has controlled since 2008. Whether or not such efforts would occur if the opposition controlled national power in Venezuela is an open question. But the fact that the PSUV was defeated in both Lara and Miranda indicates that voters do not forget poor performances in office and that they are willing to reward administrators who are seen as doing a good job. The PSUV can celebrate its victory. But this is a lesson that should not be forgotten as the party moves forward. In fact, given the willingness of PSUV leaders to follow Chávez in supporting leaders like Reyes Reyes, despite grassroots misgivings about them, it appears that this lesson has yet to be learned by the PSUV leadership.

In light of the PSUV’s impressive showing in Sunday’s election, it seems likely that the “Bolivarian Revolution” will continue even when Chávez is no longer at the helm. But the PSUV must realize that if it fails to tackle the immense problems—corruption, bureaucracy, and endemically high inflation— Venezuela continues to face (in spite of the many gains made under Chávez), voters will not be forgiving.

Gabriel Hetland is a doctoral candidate in sociology at the University of California, Berkeley. His research focuses on participatory budgeting in Venezuela, Bolivia and the US. His writings have appeared in The Nation, Counterpunch, ZNet, and Dollars and Sense, as well as edited volumes on Latin America, social movements, and Occupy.