With shouts of “Presente por la patria” (“Committed to the homeland”), spirits were high on Sunday night amongst right-wing supporters at the Feria Nacional polling center in San Salvador, where international observers watched the vote count in El Salvador’s first election since the historic victory of the Farabundo Martí National Liberation Front (FMLN) in 2009.

With shouts of “Presente por la patria” (“Committed to the homeland”), spirits were high on Sunday night amongst right-wing supporters at the Feria Nacional polling center in San Salvador, where international observers watched the vote count in El Salvador’s first election since the historic victory of the Farabundo Martí National Liberation Front (FMLN) in 2009. At the Feria, the Nationalist Republican Alliance (ARENA) quickly assumed and maintained a significant lead over the other parties. 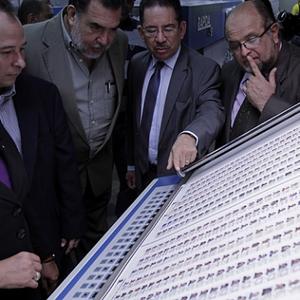 As the tallies were called in from across the country, ARENA party leaders, decked out in red, white and blue vests, announced their victory in the 2012 legislative and municipal elections. The mood could not have been different from the elation three years prior, when Salvadorans waving red flags poured into the streets, car horns blaring and fireworks exploding, to celebrate the election of Mauricio Funes, who broke ARENA’s 20 year hold on the presidency.

Though slim—ARENA garnered 39.88% of the vote while the FMLN won 36.87%—the right-wing’s victory poses a significant challenge to the FMLN for the remainder of their first term. ARENA, with 33 seats in the unicameral 84-seat Legislative Assembly will edge out the FMLN with 31, down from 35.

Right-wing split enables FMLN to bring about reforms in health, literacy and education

The Salvadoran right-wing, however, remains bitterly divided following the 2010 departure of former President Elías Antonio Saca (2004-2009), who broke away from ARENA to form his own right-wing party, the Great Alliance for National Unity (GANA).

The FMLN maneuvered the division in El Salvador’s right wing to implement an array of legislative reforms that might otherwise not have been possible, since no party held the majority, including a law permitting the procurement of generic medications, a comprehensive law condemning violence against women, and El Salvador’s first progressive tax reform in decades.

Despite ARENA’s opposition, the FMLN passed a national budget to support social reforms, including nation-wide health teams, incentives to encourage education among youth, and literacy programs for adults, being directed by the Funes administration.

As William Hernandez, FMLN representative to the Central American Parliament (PARLACEN), reported, “We have provided 1,300,000 school children with two pairs of free shoes, a school uniform, and a set of school supplies... ARENA plans to replace that by giving $40 per family. But a pair of shoes in this country costs $25.” Though funding for those programs hangs in the balance, both of El Salvador’s major parties will have to continue negotiate with Saca’s GANA in order to push their agenda.

Law and order platform competes with social reforms, dovetails with U.S.-backed regional security initiatives
Celebrating ARENA’s victory, Jorge Daboub, president of the National Association of Private Enterprise (ANEP, a private sector lobby group) said that the Left got a “message from the poor” and called the results a “protest vote.”  However, given the success of the social programs that primarily address the needs of the poor, especially in rural areas, Hernandez suspects that the low results might instead reflect dissatisfaction from the middle class, including in urban areas, where the FMLN lost several strongholds.

As Jorge Schafik Handal, FMLN candidate who lost his bid for mayor of San Salvador, predicted following the results, “The first mistake ARENA will make is to go after the social programs, which are the most highly-rated in the country.”

Running a campaign against school uniforms and doctors will be a tough road for ARENA in their attempt to retake the presidency in 2014. Perhaps as a sign of what is to come, their campaign has focused on the bringing more law and order to the country.

Beset by enormous economic instability (according to the World Bank, El Salvador has one of the lowest tax-collection rates in the world, leaving remittances from family members in the U.S. as the largest source of GDP, approximately 17%), low levels of investment, the presence of large numbers of small arms among the populace and a large sector of chronically unemployed youth, the country faces unprecedented levels of poverty and one of the world’s highest murder rates.

Hernandez and the FMLN make the case that the cause of violent crime is poverty, and that the solution must address the cause. “This is not a five-day or a 15-year project,’’ says Hernandez. But long-term solutions can get sidelined by the constant barrage of murders, crime and violence in the morning headlines, especially in a country where one of the largest news conglomerates, Telecorporación Salvadoreña, is owned by former president Saca.

ARENA’s law and order agenda suits the U.S.-led Central America Regional Security Initiative (CARSI), which, in the face of the violent narcotics trade, seeks to remilitarize the region in the name of “citizen security.” Both U.S. vice-president Biden and Secretary of Homeland Security Napolitano were in El Salvador just prior to these elections to reinforce U.S. support for the War on Drugs. Hernandez also concludes that El Salvador is essentially a ‘’conservative country” and, as such, ARENA’s hard line position on security may have held more political sway.

Several other factors may have contributed to the right-wing’s gains, including a series of electoral reforms. While the implementation of a residential vote in nine out of 14 departments, where large regional polling stations were replaced by smaller localized polling stations, made the act of voting more accessible, the process of voting was rendered more complicated at the same time.

The reforms included dramatic changes to the ballot—the size of a standard newspaper page and packed with a dizzying array of choices. In San Salvador, where each of the eight competing parties ran 24 candidates, plus two independent candidates, the ballot was crowded with 194 names and photos, as well as party flags, leading to discrepancies in the way the vote count was conducted at different sites.

Voter turnout may have also contributed to the lower-than-expected performance of the FMLN, which was polling ahead of ARENA according to CID-Gallup and the University of Central America polls. While the Supreme Electoral Tribunal had predicted between 62-65% voter turnout, La Prensa Gráfica reported that only 49% of eligible voters came out on Sunday.

When asked for his reaction to the election results, Mr. Hernandez responded, “In El Salvador we have a saying: ‘After somebody dies, you bury the dead, you don’t cry over the body.’ Last night we had our cry, and at eight o’clock this morning, we began our 2014 presidential campaign.’’

Judith Brisson is a teacher, artist and human rights activist from Montreal, Quebec who observed the 2012 Salvadoran elections with CISPES, the Committee in Solidarity with the People of El Salvador.