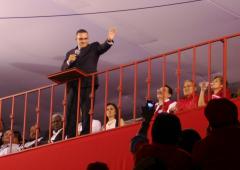 June 8, 2012
A World Bank tribunal ruled last week that the Pacific Rim Mining Corporation can't sue the government of El Salvador under DR-CAFTA for denying its mining permit—but can proceed under El Salvador's own investment law using the same international tribunal. The case could undermine the growing campaign in El Salvador to legally ban metallic mining.

William Brownfield, U.S. assistant secretary of state for the Bureau of International Narcotics and Law Enforcement Affairs (INL), toured Central America last week to quell the growing opposition to U.S. drug war policies that have failed to reduce demand for drugs in the United States or disrupt supply routes from producer countries.

With shouts of “Presente por la patria” (“Committed to the homeland”), spirits were high on Sunday night amongst right-wing supporters at the Feria Nacional polling center in San Salvador, where international observers watched the vote count in El Salvador’s first election since the historic victory of the Farabundo Martí National Liberation Front (FMLN) in 2009.

On Monday morning, crowds gathered in the community of El Mozote to commemorate the 20th anniversary of the signing of the Peace Accords that ended El Salvador´s 12-year-long civil war. At the solemn event, El Salvador’s first leftist president, Mauricio Funes, apologized for the state role in the 1981 El Mozote massacre and announced reparations for the victims and their families.

A Vote For Democracy in El Salvador

August 5, 2011
Last week, after a wave of popular protests, the Salvadoran legislative assembly voted to repeal controversial Decree 743 which required the country’s highest judicial body to  reach decisions by unanimous consent. The action ended two months of political turmoil, averted a constitutional crisis, and represents a victory for civil society that strengthens the role of democratic institutions in El Salvador.

July 22, 2011
San Salvador polls show a sharp drop in President Mauricio Funes’s approval ratings over the past several months. But on a recent visit to San José Las Flores in Chalatenango, members of the Cambridge, MA Sister City delegation were impressed by the strong support Funes continues to receive in the countryside, and the visible accomplishments of the government’s new initiatives in health, education, agriculture, and infrastructure development.

July 8, 2011
President Mauricio Funes reaffirmed last week that no mining projects will be permitted in El Salvador during his presidency, and condemned the recent murders of anti-mining activists.  But anti-mining organizations want a permanent legal ban on mining activity, and are critical of the government’s ongoing study to evaluate the costs and benefits of mining. At a recent meeting with international solidarity activists, Environmental Minister Herman Rosa Chávez offered insight into the government’s position.