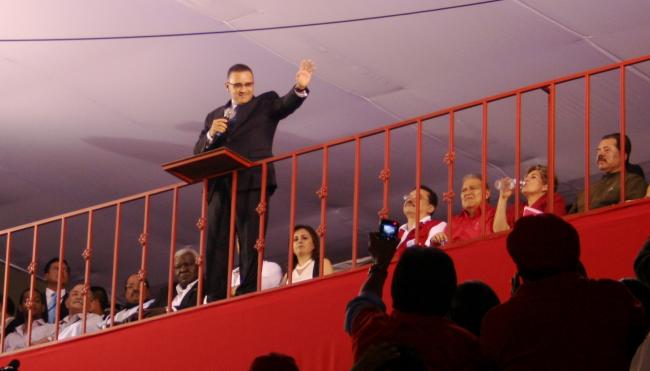 On September 6th, the former president of El Salvador, Mauricio Funes, was granted political asylum in Nicaragua, where he has been living and working as a private consultant for the last three months. Funes, who was president from 2009 to 2014, asserted that he has been receiving death threats and has “well-founded reasons to insist that the extreme right has a plan for violent attacks against me.” The Nicaraguan government granted political asylum on the basis of a credible claim that the ex-president’s “life and physical integrity are in danger for fighting in favor of democracy, peace, justice, and human rights and because of his political affiliation.”

In a statement he released through social media, Funes responded to accusations that he is fleeing El Salvador to escape prosecution in a case of alleged corruption: “By requesting political asylum from the Nicaraguan authorities, I do not intend to evade Salvadoran justice nor does it mean that I am renouncing my defense in the relevant courts,” he wrote. “I am convinced that I can demonstrate my innocence.”

Salvadoran law requires public functionaries and their families to submit declarations of their assets when they first take office as well as after they leave office, which the Supreme Court’s Probity Section is charged with studying. If the Court finds any assets or income to be unjustified and potentially the result of illicit enrichment, the full Supreme Court votes on whether to order a Civil Court to pursue the case. The Probity Section identified $70,000 in assets that it claims cannot be justified by Funes’ reported income and with a 9-6 vote the Supreme Court ordered a civil case be opened. Funes sustains that the investigation was arbitrary and mishandled and that he can justify all of his assets. He also says the Supreme Court violated his right to a hearing and never allowed him to defend himself.

The procedure for public functionaries to declare assets has been roughly the same since 1959; however, Funes is the first ex-president against whom the Probity Section has taken any action, despite the fact that his four most recent predecessors from the right-wing Nationalist Republican Alliance (ARENA) party, Alfredo Cristiani, Armando Calderon Sol, Francisco Flores, and Tony Saca, had all submitted declarations showing much greater increases in assets than Funes. In fact, Funes’ overall assets actually decreased during his administration. The Supreme Court has since also requested a Civil Court pursue a case for illicit enrichment against ex-President Saca, who was kicked out of the ARENA party in 2009.

After the Civil Court received Funes’ case, the new Attorney General, Douglas Meléndez, who took office in January 2016, began an additional criminal investigation. Meléndez has received heavy criticism for handling the investigation in a manner that appeared designed to feed into sensationalist media coverage. For example, the Attorney General’s Office posted live updates on Twitter during a series of raids of properties associated with Funes and his family, posting photos of items found in the properties, including an aquarium and an expensive stroller.

Lorena Peña, president of the Legislative Assembly and a member of the governing Farabundo Marti National Liberation Front (FMLN) party, accused the Attorney General of not conducting a serious investigation due to the “media show” Meléndez generated, “done to finish someone in the media and publicly, and later capture and condemn them, even if there is no evidence,” said Peña in a TV interview.

The FMLN legislator went on to compare the Attorney General’s Office’s treatment of Funes to its treatment of conservative Supreme Court Magistrate and ARENA donor Belarmino Jaime, who is currently being investigated for $6 million USD in tax evasion: “But [the Attorney General] has not gone to show us the Magistrate’s kitchen, nor have they taken his car, nor have they shown us his grandchildren’s tricycles, nor his pants, nor his wife’s pants,” Peña said in the same interview.

In fact, it was transparency measures implemented by the Funes administration and current FMLN-administration of Salvador Sánchez Cerén to increase citizen oversight of the government that now provide unprecedented access to public information, which El Salvador’s conservative media has not hesitated to manipulate. In recent months, many FMLN functionaries have been subjected to “trials by media,” in which the press tries to convince the public of their corruption in the absence of any conviction or, in some cases, even formal charges.

Funes has not yet been formally charged with any crimes. But so complete was Attorney General Meléndez’s campaign against him that on September 9, he had to clarify to the media that he has not issued any arrest warrant for Funes. On September 11, a probable cause trial began in a Civil Court to determine if there is sufficient evidence to proceed with formal charges and a full investigation.

Troublingly, the Attorney General has chosen to pass over the hundreds of long-ignored cases of corruption by ARENA administration officials totaling more than $37 billion that members of the Funes administration unearthed when they took office in 2009.  Meléndez has also not resumed investigations into the embezzlement and money laundering case of now-deceased former ARENA president Francisco Flores (1999-2004) in which many ARENA leaders and current legislators are implicated.

The Director of the Monsignor Romero Center at the Jesuit Central American University (UCA), Rodolfo Cardenal, wrote that members of the ARENA party and now the Attorney General were seeking “vengeance” against Funes, whose 2009 victory with the FMLN ended 20 consecutive years of ARENA presidencies that were characterized by rampant corruption. According to Cardenal’s editorial: “The Attorney General’s Office itself frequently appears more vengeful than adherent to the law. Certainly, it does not provide everyone with the same treatment. Humiliating and inflicting suffering does not repair the right that was violated, but rather generates more violence, more humiliation, and more suffering, which then demand further vengeance.”

International and Salvadoran media have painted Funes’ decision to seek asylum in Nicaragua as an effort to flee justice; Funes has rejected the idea that he is a fugitive given that there are no arrest warrants issued against him and his defense has presented evidence to absolve him in the recently initiated probable cause trial. A ruling is expected in November about whether there is sufficient evidence to proceed with criminal charges.

It is difficult to predict how things will play out going forward, but if the Attorney General does issue an arrest warrant, Funes could turn himself in voluntarily. If he didn’t, the Attorney General could push for extradition, which would create a difficult political-diplomatic situation for the Sánchez Cerén administration.

It’s no secret that attacking the FMLN for alleged corruption has been an ongoing strategy of El Salvador’s right-wing in order to sow discontent and destabilize in hopes of retaking power. Actions by the two most recent US Ambassadors to El Salvador, who frequently applaud the Supreme Court’s biased application of anti-corruption procedures and praise the Attorney General’s politically-charged and sensationalist investigations, beg the question of whether the US government really wants to support the fight against corruption in El Salvador or, instead, contribute to the right wing’s destabilization campaign.

Laura Embree-Lowry lives in Washington D.C. where she works as Program Director at the Committee in Solidarity with the People of El Salvador (CISPES). A graduate of Boston University’s College of Communications, she lived in El Salvador for six years working with the popular social movement and writing about Salvadoran politics.