Over the weekend of February 18 and 19, in Tocoa, Honduras, more than 1,400 campesinos, indigenous people and their allies met to continue their fight against repression. Activists organized the international gathering in solidarity with Honduras to expose the rampant violations of human rights and the systematic killing of campesinos.

Over the weekend of February 18 and 19, in Tocoa, Honduras, more than 1,400 campesinos, indigenous peoples, and their allies met to continue their fight against repression. Activists organized the international gathering in solidarity with Honduras to expose the rampant violations of human rights and the systematic killing of campesinos. For months, campesinos have been struggling for land rights as agricultural corpo 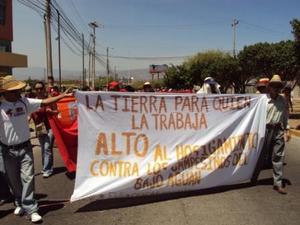 (Credit: Pelusaradical.blogspot.com)rations take over more land. The fight has centered around Miguel Facussé and his agro-fuels Dinant Corporation, as well as the Standard Fruit Company. Speaking to the crowd, Melissa Cardoza, with the Convergence of Popular Movements in the Americas (COMPA), read from the gathering's declaration about the state of human rights in Honduras:

The war in Honduras that has been furiously unleashed since the coup d’état is manifested with assassination, persecution, the criminalization of organized actions, kidnappings, sexual violence toward women, intentional crimes that terrorize the children that live in the villages of campesinos in struggle, attacks against the grassroots media, imprisonment, exile, and lately, arson attacks against distinct populations of the country.

Family members continue to demand answers regarding the prison fire that killed more than 350 people. On Monday, relatives broke into a morgue, demanding their loved ones' remains. Many Hondurans are also questioning a second fire that erupted over the weekend at the country's largest outdoor market in Tegucigalpa. No one was killed, but many vendors now lack a place to sell their goods. The fires are just the latest disasters to hit the country with the highest homicide rate in the world.

One of the objectives of the gathering was to launch an international solidarity brigade, which would observe and document human rights abuses in the Bajo Aguán region. In this vast valley, landowners like Facussé grow African palm, which is then processed and made into cooking oils and biodiesel. Human rights in the country have declined since the 2009 coup and one of the most violent regions is the Bajo Aguán. Over 60 farmworkers, or campesinos, have been killed over the last two years in Bajo Aguán because of complex land conflicts with Facussé, the country’s wealthiest landowner.

Consuela Castillas used to work on one of Facusse's African palm plantations. The middle-aged campesina, who was born in the Bajo Aguán, eventually began organizing with the Unified Campesino Movement of the Aguán (MUCA), both to secure land rights and to fight for the health of workers. Castillas herself suffers from chronic asthma from years of working with toxic chemicals used in palm production. She said the threats against activists like her have been increasing.

In addition to private security forces, the state military presence in the Honduras and in the Aguán specifically has grown since President Porfirio Lobo took office in 2010. Activists said this has increased the harassment of communities, challenging the vast monocrop fiefdom run by Facussé. Salvador Zuniga of the Council of Popular and Indigenous Organizations of Honduras (COPINH) said that death threats are an everyday occurrence for environmentalists and campesinos who inhabit many biologically diverse regions of Honduras.

“I think that it is important that world knows about that the constant violation of human rights in our country continues and has become quite acute,” Zuniga said. “It is good that people know about this but also that they plan actions to be executed in defense of our human rights in a country that is becoming characterized by violence and repression, and in particular in the sector of the Bajo Aguán, where a daily occurrence is the detention of men and women campesinos as well as their assassinations.”

In addition to international human rights groups, some U.S. lawmakers have also raised the issue of violence Honduras. Late last year, U.S. Representative Howard Berman wrote to Secretary of State Hillary Clinton, expressing his concern about the systematic violations of human rights and killings of campesinos in Honduras. Berman and other lawmakers want the State Department to withhold military aid until human rights improve. But Annie Bird, co-director of the Washington D.C.-based Rights Action, said there has been little response from the Obama administration to the growing violence. She said that could be due to geopolitical interests and the expanding us military presence in Honduras.

“The US has a very direct military presence in the Aguán and of course in Honduras in general. While it is true the government in Honduras is completely collapsed, there is no justice system, and the police are part of organized crime the military is part of organized crime. You know the conclusion that is being drawn from that is that well the U.S. needs to militarize more, have a more direct military presence, the DEA acting directly in the region. And of course we need to create new police forces for Honduras that the U.S. needs to do that, when that is absolutely the wrong answer to what’s happening, more militarization will not change the situation or solve any problems,” she said.

The campesino's fight for land rights is starting to achieve some results. Last Friday, a group of farm workers signed an agreement with President Porfirio Lobo that would give land titles to campesinos for close to 20,000 acres of land over the next fifteen years. But some have criticized the latest agreement, which includes a six percent interest rate on the payment of the lands. Activists are also demanding an end to detentions of labor leaders and the harassment of families.

Tim Russo is a reporter based in Mexico. This article is an edited version of a radio report originally prepared for Free Speech Radio News (FSRN). You can hear the FSRN report here. For more see "Out of the Past, a New Honduran Culture of Resistance," by Dana Frank, May 3, 2010, and "Biofuel (the New Banana) Republic," by Suzanna Reiss, September 15, 2011.