In commemoration of the 10th anniversary of the April 11, 2002, coup d'état against Venezuelan president Hugo Chávez, NACLA presents the award-winning feature-length Venezuelan documentary "Llaguno Bridge: Keys to a Massacre," a comprehensive audio-visual investigation into the events surrounding the 2002 coup d'état in Venezuela. 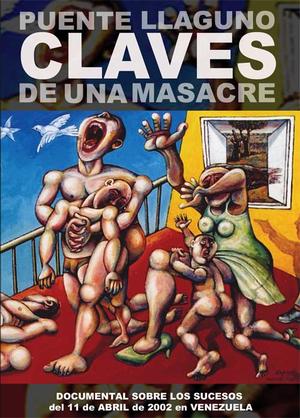 Llaguno Bridge: Keys to a Massacre

Exactly ten years ago, on April 11, 2002, a group of rebelling military officers, together with opposition leaders and the mainstream media, staged a coup d’état against Venezuelan president Hugo Chávez. Nineteen protesters were killed in the confusing events of that day. Chávez was jailed. Pedro Carmona, the head of Venezuela’s elite business federation, FEDECAMERAS, was sworn in as de facto president, quickly abolishing the country’s 1999 Constitution, disbanding the Congress, and installing a virtual media blackout.

Less than two days later, however, pro-Chávez supporters descended from the poor barrios around Caracas and Venezuela. They surrounded the presidential palace, Miraflores, and demanding that their president be returned. Within a few hours Chávez was back in power.

Due to the myths, lies, and media manipulation, the truth about the events of April 11, 2002 is still often overlooked.

In commemoration of the 10th anniversary of the April 11, 2002 coup, NACLA presents the award-winning feature-length Venezuelan documentary Llaguno Bridge: Keys to a Massacre.

The whole world knew that on the April 11, 2002, in Venezuela, there occurred a massacre. The whole world condemned the deaths of so many humans. Several people that were filmed shooting from a bridge in Caracas were shown as the culprits of the massacre that caused 19 fatal deaths. This information went around the world. But together with the deaths and injuries from that day, there was another victim: the truth. This documentary shows images, testimony, and key historical facts hidden by many mainstream media about the massacre at Llaguno Bridge.