In the violent agrarian conflict in the Bajo Aguan region of Honduras, a new financial deal and continued eviction threats are catching the attention of the international community.

In the violent agrarian conflict in the Bajo Aguan region of Honduras, a new financial deal and continued 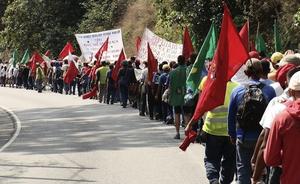 Farmers Defend Land Rights. By Giorgio Trucchieviction threats are catching the attention of the international community.

On the day of a payment deadline set by a major landowner in the conflicted Bajo Aguan region of Honduras, the national bank approved a loan for the government to buy a substantial portion of the contested land. The move is aimed to settle the dispute between two of the major landowners in the region and some of the thousands of farm worker families living and working on the land.

Landowner Miguel Facusse Barjum threatened to begin forceful removal of the farm families from the contested lands on June 1 if the government did not pay his company, Exportadoras del Atlantico, for the lands. The company has had the deeds to the land since 1992. The Honduran Bank for Housing and Production (Banhprovi) approved the 636.1 million Lempira (about $33.5 million) loan, destined for 4,712 hectares of land, that will allow the government to repay the landowners immediately. The farm workers will reimburse the government over a period of 10 years at 6% interest.

The deal only includes two of the 15 major landowners in the region, and only the farm workers living on the left side of the Aguan River. Those on the right side refused to sign, citing impossible loan conditions provided by the government and a right to the land given the historical context in Honduras.

Rafael Alegria, from the farm workers network, Via Campesina, explains, “The central problem in the Bajo Aguan is a violation of farm workers’ rights due to land hoarding… by voracious national and international capital in our country. This capital has an interest in strengthening monoculture in our country, especially with African Palm trees and sugarcane, to make the infamous Ethanol and feed into Agribusiness. It isn’t interested at all in the environment or workers’ rights.”

A spokesman for landowner Facusse argues that the current conflict is due to ousted President Manuel Zelaya’s attempt to redistribute land to farm workers. He explains,“The way we see it, this problem started with President Zelaya’s political project, in which he offered peasants 35 million Lempiras in order to buy land. He was removed from office in 2009, and the farm workers got caught in the middle, so in December 2009, they started to invade our properties. They have invaded more than 8,000 hectares that belong to our company.” He acknowledged that evictions of farm workers from the land began in 2009, and then stopped. “The police received orders from a higher power,” he claims.

On June 1, Felix Maldonado Jimenez, the assistant to the Honduran Secretary of Security, declared in a joint interview with Hector Mejia Velasques, the Sub Commissioner of the National Police, that they would proceed with evictions Facusse demanded if the farm workers did not pay for the land. Evictions are expected to resume in the coming weeks for the inhabitants of the right side of the Aguan River. They added that “we will act according to the law,” an assurance that will doubtfully assuage the concerns of the farm workers.

The declaration of intent to proceed with evictions comes on the eve of an International Public Hearing in the Bajo Aguan region called together by nine international organizations concerned about human rights abuses happening within the context of the land conflict in the past three years. The abuses include 45 assassinations; continuing intimidation by police, soldiers, and landowners’ privately hired guards stationed in the region; as well as homes and schools razed, residents beaten, and livestock shot during past evictions. Farm workers accuse the private guards of most assassinations. Exportadoras del Atlantico denies responsibility in all but one case.

The participants of the public hearing, which took place on May 28, 2012, included the European Parliament, the United Nations High Commission for Human Rights, and 26 experts in the field from 12 different countries across the Americas and Europe. Salvadoran lawyer Maria Silvia Guillen, the current director of the Foundation for the Study of the Application of the Law (FESPAD) and past representative to the Interamerican Commission of Human Rights, served as the president of the hearing’s hosting commission. “With the coup, the international community has already seen how democracy is denied in Honduras,” Guillen explained in the event’s opening. “If State institutions were working, we wouldn’t be here…. We make a call to the world, to governments, to international organisms, that they pay serious attention to the Bajo Aguan.”

The committee released a series of recommendations directed to the Honduran state, which include an immediate investigation of all of crimes committed in the Bajo Aguan, including punishment for the material and intellectual authors. It demanded an immediate end to the repression of the farm worker movement. The committee also directed recommendations to the international community: a constant dialogue with the Honduran state in relation to the case and an increased vigilance of the abuses happening in the region within any new business or trade agreements, among others. This is the second time this year that the international community has gathered to observe human rights abuses in the region.

The conflict in the Bajo Aguan is by most accounts a complicated mix of contradictory laws, green economy development practices, historical realities, and drug trafficking—all sharpened by the fact that the Honduran citizens and members of the international community are seriously questioning the legitimacy of the administration of current president, Porfirio Lobo. The Central America coordinator of the Right to Food Accounability Program (FIAN) confirms that only 17 of the 45 assassination cases connected to the agrarian conflict appear in the attorney general’s registry. Most accounts trace the beginning of the violence to 2009, the same year of the coup that ousted elected President Zelaya and greatly destabilized democracy in the country. Also in 2009, the national murder rate skyrocketed, eventually climbing to 82.1 per 100,000 citizens, making Honduras the country with the world’s highest murder rate.

“Looking at the statistics, you could say that what we’re talking about with Honduras is a failed state,” argues Honduran journalist Manuel Torres. “It has to do with impunity. About 5% of crimes are processed in Honduran courts. Government institutions are highly politicized, and there is no real interest on the part of the government—including police and security forces and the department of justice—in transparency.” When asked if he believes there to be a state policy supporting assassinations, he clarifies that it is not yet a policy, but does show clear complicity on the part of the State. “But how long it will take to convert into a policy—that I don’t know,” Torres adds.

Danielle Mackey is a journalist currently based in El Salvador. For more see "Hondurans Continue Protests in Bajo Aguan Region," by Tim Russo, and "Out of the Past, a New Honduran Culture of Resistance," by Dana Frank, May 3, 2010, and "Biofuel (the New Banana) Republic," by Suzanna Reiss, September 15, 2011.