Life in a Border Town Marred by Tension

The part of the border that divides the Dominican Republic from Haiti on the southern coast of the island of Hispaniola is seldom reached by outsiders, and the conflicts that transcend the metal gate between the towns of Pedernales, on the Dominican side, and Anse-à-Pitre, in Haiti, seem reminiscent of the children’s stories of Dr. Seuss that warn against infantile stubbornness and teach the morals of cooperation.

The following article is from the Summer 2012 issue of the NACLA Report on the Americas, "Latin America and the Global Economy." It was published alongside Jacob Kushner's expose, "Haitians Face Persecution Across Dominican Border," a NACLA investigation funded by the Samuel Chavkin Fund for Investigative Journalism that found the Dominican Republic to be openly discriminating against Haitians immigrants only two years after Haiti suffered a devastating 2010 earthquake.

The part of the border that divides the Dominican Republic from Haiti on the southern coast of the island of Hispaniola is seldom reached by outsiders. To get to the Dominican town of Pedernales from Santo Domingo takes a seven-hour ride on a public bus, or gua-gua, through a desertlike region bordered to the south by pristine stone beaches on the Caribbean Sea. On the opposite side, the trip from Port-au-Prince to the Haitian town of Anse-à-Pitre requires switching between multiple tap-taps that drive along a worn-out road. For the second leg from Marigot, one must choose between a brutal dirt-road drive that has no mercy for the ancient vehicles that navigate it, or an overnight voyage on a perilous wooden raft over the sea. 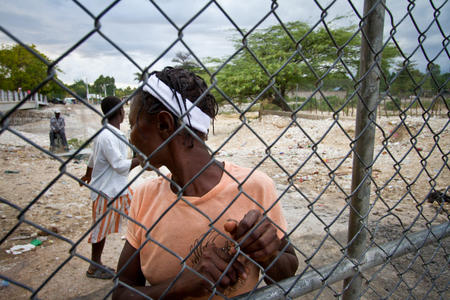 The conflicts that transcend the metal gate between the two towns seem reminiscent of the children’s stories of Dr. Seuss that warn against infantile stubbornness and teach the morals of cooperation. In early February, Dominican agents seized a motorcycle crossing an unguarded section of the border and refused to return it because of a dispute over the title of the vehicle, which had been purchased on the Dominican side. So, one Saturday morning, Haitian residents of Anse-à-Pitre retaliated by seizing the motorcycle of a Dominican crossing there to buy rum.

After a day of arguments, Dominican border officials negotiated the return of each bike to its rightful side. “They were exchanging them at the halfway point, just like some sort of movie,” said Barbara Martin Diaz, a volunteer for the Spanish aid organization Movimiento por la Autogestión y Educación in Anse-à-Pitre. “But the Dominicans had put sugar in the motor of the Haitian one, ruining it. The Haitians were very mad.” Now Haitian residents say they are discussing how to strike back.

Dario Estevez Flores, director of customs on the Dominican side, smiles politely as he confirms the details of the story from his desk at an ostentatious new office building. “This sort of thing always happens here. And it always will,” he says.

An assistant enters through glass doors to the air-conditioned room bearing chocolates. The sporadic mooing of cows erupts now and then from the pasture outside.

“Here, we follow the procedures. Someone here on the border put in sugar, so we sent a mechanic to fix it. But in Haiti, there’s no authority, so the people take control,” Flores said.

The discrepancy between the two countries’ resources is striking. Estevez Flores estimates that Pedernales has over 130 police officers, soldiers, border agents, and uniformed customs enforcers. On a Tuesday in February, a uniformed Dominican guard armed with a rifle guards the gate, allowing those he recognizes to pass. Another guard checks the registration papers and licenses of vehicles crossing the dried riverbed separating the two countries.

But on the Haitian side, exactly two Haitian customs officers sit inside their office—a shipping container. Farther into town, a lone Haitian police officer eats lunch at his desk inside Anse-à-Pitre’s one-cell jail. A Haitian woman enters, with stitches in her head, bruises across her face, and a warrant from the town judge for the arrest of her husband for domestic abuse. The officer apologizes to the woman that he can’t arrest her husband today because he can’t leave the office unattended. He’ll get to it later in the week when an additional officer arrives. “Look at this office—it’s just me,” he tells her. “We have only one gun.”

Every now and then, the imbalance between well-resourced Dominican authorities and their unorganized Haitian counterparts results in disputes much more serious than a confiscated motorcycle.

In February, a Dominican stabbed a Haitian while he was swimming in the river that separates the two countries, presumably the escalation of a drug-related dispute. The Dominican fled back to his native side, where Dominican authorities arrested him. But the Haitian police chief says the Dominicans refuse to turn him over to face Haitian justice because “they say the jail here is too tough.” (Flores says it’s standard procedure that neither country hands over “one of its own” through extradition).

In an even more serious incident in November 2009, just months before the earthquake struck Haiti, a Dominican border guard shot his rifle toward the Haitian side during a dispute, killing one Haitian and injuring another. When asked about the shooting, it takes Flores a moment to recollect. There have been so many incidents . . .

He remembers that some Haitians stole the motorcycle of a Dominican who was swimming in the river. An off-duty Dominican soldier crossed to the Haitian side to retrieve it, but as he entered the gates, Haitians threw stones at him, one of which struck the on-duty Dominican border guard in the shoulder. The 20-year-old guard shot his rifle, killing a Haitian man who had been attempting to help the Dominican man to safety.

Flores concedes that the on-duty border guard who fired violated the rules of engagement and says that he was transferred away for that reason. He says the man was not tried for the incident.