During the first decade of the 21st century, Bolivia’s “classic” newspapers have disappeared. Beyond print, radio has traditionally dominated Bolivia’s media landscape, a reality due in large part to the country’s multiethnic and multicultural makeup. For perhaps the same reason and also because of its high degree of politicization, Bolivia leads the world in community broadcasting.

During the first decade of the 21st century, Bolivia’s “classic” newspapers have disappeared. Preference for tabloid-size print media was one of the reasons for the extinction of Presencia, the Catholic daily that, since the 1950s, had been the morning paper with the largest national circulation. Ultima Hora, an afternoon paper turned morning tabloid, also disappeared, unable to survive the death of its owner, Mario Mercado. Hoy was born a tabloid but also closed its doors, making room for the new leading opinion papers: La Razón (later acquired by Grupo Prisa) and La Prensa, established as a result of the resignation of La Razón’s founding managers. A new group of journalists, unhappy with the management and political positions of these leading La Paz newspapers, founded Página Siete, perhaps now the most influential independent daily. 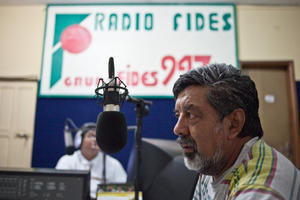 Only two of Bolivia’s older papers remain: Jornada, which was always a marginal paper because of its sensationalism, and El Diario, which was founded in 1904 and prides itself on being the “dean of the Bolivian press,” although its sales are for the most part guaranteed by its classified ads sections. The biweekly Nueva Crónica y Buen Gobierno is undoubtedly the foremost independent medium for political, economic, social, and cultural analysis.

The emergence of new papers, an increase in color advertising, and growing interest in the media on the part of certain political groups permitted several regional daily papers to expand to the national level. The oldest of these is Los Tiempos, of Cochabamba, where Opinión is also published. In Santa Cruz, the most reputable paper is El Deber, followed by a large margin by El Mundo, a daily that began on solid ground but that today serves sectarian interests with a very low quality of journalism. In the south of the country, there’s El Correo del Sur, whose influence doesn’t reach beyond the departments of Chuquisaca, Potosí, and Tarija.

Despite Bolivia’s growing population, the volume of overall print circulation has consistently fallen, due in large part to the accessibility of newspapers on the Internet. Far from the days of Che Guevara’s guerrilla movement—when Presencia boasted a circulation of 200,000—current circulation rates for Sundays rarely exceed 30,000 copies. All Bolivian newspapers have websites that reproduce the majority of printed information, including weekly supplements. And though these sites are at times unstable, they nevertheless offer an alternative for individuals with a wide-bandwidth connection at home or at work.

The drop in circulation can also be attributed to alliances formed among the newspapers themselves. The result is that the same news and opinion columns from the same journalists are simultaneously published in three of four papers. The principal alliance between Bolivian newspapers is headed by Grupo Líder and includes La Prensa, El Deber, Correo del Sur, and Los Tiempos, among others.

The emergence of virtual Web publications has also contributed to the demise of print editions. Among the most popular are Bolpress.com, which is updated daily, and La Época, which also has a print edition. Debates and dialogues over the Internet have become common in urban areas thanks to platforms such as AulaLibreBol and Tribuna Bolivana (both of which are active on Yahoo Groups).

Beyond print, radio has traditionally dominated Bolivia’s media landscape, a reality due in large part to the country’s multiethnic and multicultural makeup. For perhaps the same reason and also because of its high degree of politicization, Bolivia leads the world in community broadcasting.1 Community radio took on extra importance in Bolivia when union radio stations were established in mining camps of the altiplano in the late 1940s. Miners’ radio stations were followed by campesino stations, which now constitute, through the La Paz–based NGO Educational Radio in Bolivia (ERBOL), one of the country’s most influential networks, with 72 affiliated stations. Countrywide, there are more than 800 licensed radio stations, the majority broadcasting on FM and only a quarter using AM or shortwave. The concentration of stations along the axis connecting the urban centers of La Paz, Cochabamba, and Santa Cruz is higher than in any other part of the country.

The outlook for television is generally depressing and far less interesting than that of print media or radio. Nevertheless, television has an influence on urban homes unlike any other form of mass media. Half of the adult population watches an average of three hours of television per day. The numbers are even more shocking for those under 15, who reportedly spend double that amount of time in front of the TV. The nearly 200 channels created since 1985 have done little to diversify programming or generate content relevant to Bolivian society and culture. Just as La Paz has maintained its dominance over print media, Santa Cruz has been able to harness the power of television, always carrying off the biggest slice of the advertising cake.

Alfonso Gumucio Dagron is a Bolivian writer, journalist, and filmmaker. This article was translated by Dennis Stinchcomb.

For more on this subject see: Media and Democracy in Bolivia.