“Mic check!” The Occupy movement has created a new medium for collective listening.

Men are, above all, creators of symbols and images. Before the tool, humanity created the realm of the symbolic.

—Lewis Mumford, The Myth of the Machine

Night falls slowly over Zuccotti Park. The autumn is still mild, and the light allows you to make out the faces, the bodies squeezed together at the steps of the park, already converted into a micro-polis. At the center, the next speaker organizes his speech in short phrases, looking to maintain a rhythm that can be reproduced by hundreds of people unevenly distributed across the space. A powerful yell breaks through the din, and the continuous murmur of voices that in small groups exchange information, thoughts, feelings, desires: “Mic check!” pause, “Mic check!” and after a second, in a coordinated exercise of analog reproduction, the crowd responds: “Mic check!” This is how the space is created for collective listening.

This is the “human microphone.” Used in the past during anti-war and anti-nuclear protests in the United States, it has become, since the first days of Occupy Wall Street (OWS), an effective, entertaining, and fundamental device to confront the New York City government’s prohibition against using electric amplification. The human microphone has been used in the assemblies, marches, and teach-ins, and it has become an integral part of the Occupy movement’s know-how.

The first time I participated in a collective exercise with the human microphone, I noted three fundamental elements: (1) By reproducing with your own body and voice the speech of another, it becomes impossible to listen distractedly; (2) the other’s words penetrate your own body, clarifying the meaning and producing a community of speakers; and (3) words become ideas. Through my ethnography of the movement, undertaken during more than three months in fall 2011, it seemed that the human microphone could be understood as a tactic, that is, as a practice of resistance by those who must play on the opposing team’s field, with a borrowed ball and a referee who opposes them (to sum up the complex theory of this practice by French scholar Michel de Certeau, who considered tactics the “art of the weak”).

The people’s mic challenges and confronts modern conceptions of technology, which assume that it can be reduced to the production and use of devices with predetermined ends. Surely the local government’s prohibition of amplifying equipment and the New York Police Department’s obsession with confiscating all types of “subservive” items like microphones, megaphones, and generators are based on this restricted understanding of technology. This view loses sight of how the use of technology is always the result of human action and, in this sense, the device responds to a complex system of thoughts, rules, and imagination. Subversive potential does not come from the device itself, but from human action.

Challenging this technologinal reasoning, OWS converted the human microphone into a great argument against techno-scientific power. By linking the word to the body and the crowd, the human microphone transformed an obstacle into an important asset for the social movements in the street. More importantly, by profoundly recuperating a humanistic definition of the technical (techné for the Greeks), which implies human action in order to produce a reality that did not previously exist, the human microphone again placed the actor in the center of the process of communicative interaction.

It is true that the human microphone does not allow for sophisticated, extensive speeches. First, its power comes from an enormous communicative willingness on the part of the speaker to fit his or her ideas into a rhythm reproducible by the people. The speaker is a kind of DJ whose art is not just to deliver a musical discourse, but also to know how to interpret the rhythm, the spirit, and the emotions that emanate and that are co-produced by the relationship between the DJ and the people before him or her. In this way, the strength of the human microphone comes from this complex relationship of collaboration between speaking and listening, between the speaker and the others in the park. 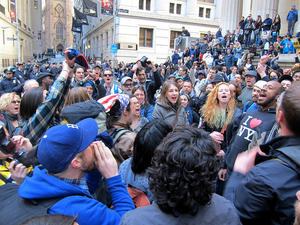 Second, the success of the human mic depends on an exercise of listening and repetition that modulates the idea-words of the speaker. This is important, because this modulation is highly political. By repeating the speech, by embodying the other who speaks through me—the other to whom I lend my voice and my body—I open the gates for the construction of a common understanding that embraces or rejects the proposed ideas. To modulate is a political act of adjusting the proposed idea in order to take on the other in a shared frequency.

Thus, in a meeting in Liberty Plaza (as Zuccotti Park was rebaptized), a 10-year-old girl uses the human microphone:

Meanwhile, in a meeting in Washington Square, an older man, who comes from the labor movement, tried, without success, to use the microphone.

The speech was interrupted, and the human amplifiers stayed silent, while the speaker gave, alone, a five-minute speech that no one followed. In this case, the problem was not only the length of the speech but also the attitude of the speaker, whose political culture clearly came from a tradition of meetings with long speeches.

The modulation worked, through the gradual silence, to regulate the styles, the tones, and the forms of communication that the people of Occupy have decided to make their own. The human microphone thereby contributes to the configuration of a subjective transversality that, through speech, produces a political community that, although short-lived, is deeply powerful in terms of the politics of emotion. It weaves the subjective will beyond ideologies and ties each participant into a political community altering both the political and the collective space.

During the nearly three months that OWS was able to make Zuccotti Park a space not only of protest but principally a polis for the deliberation of the many, the occupiers showed an enormous capacity to invent. In the sense of the Latin word invenire—to make come—they invented forms, processes, and practices that altered the way of being together with others in the public space and restored the central importance of everyone’s active participation, where each person counts and is important. While the human microphone reinvented the ways of producing communication, no less important (though they weren’t very visible) were the bicycles used to produce energy when the generators used to power the computers were taken, the collective kitchen, and other services. When the NYPD confiscated generators for the supposed danger they represented, OWS responded with human generators. People “donated” time pedaling a stationary bike to produce this alternative energy. Beyond the effectiveness of this machine, I believe the central point lies exactly in what Mumford would call the “realm of the symbolic”: a technology of oneself for an emancipatory transformation of the collective.

It is the festiveness

It is the irreverence

It is the willingness to listen

That gives the human mic

Its power and its value

As an open discourse

Through which another speaks to me

And is spoken through me.

Rossana Reguillo is a professor in the Department of Sociocultural Studies at the Instituto de Estudios Superiores de Occidente, ITESO, Guadalejara, Mexico. She is the author of Culturas juveniles: formas politicas del desencanto (Buenos Aires: Siglo XXI 2012). This article was translated by Amelia Frank-Vitale.