Indigeneity is not exactly where one looks for world politics. Yet it is probably one of the hip sites of global governance today. Indigenous peoples are engaging in international relations with a vibrancy that belies any perception of their politics as isolated or passive.

This article first appeared on Upside Down World on November 26, 2013. 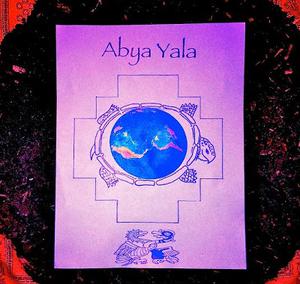 Indigeneity is not exactly where one looks for world politics. Yet it is probably one of the hip sites of global governance today. Indigenous peoples are engaging in international relations with a vibrancy that belies any perception of their politics as isolated or passive. The Fifth Continental Summit of Indigenous Peoples of the Abya Yala, held November 10-15 in Cauca, Colombia, was only the latest expression of Indigenous diplomacy.

The Indigenous expression Abya Yala  (“Continent of Life” in the language of the Kuna people of Panama) refers to the Americas, and increasingly to a series of continental summits. The process started with two ad-hoc meetings, the 1980 Encounter of Southern Cone Indian Organizations in Ollantaytambo (Peru) and the 1990 Continental Conference on Five Hundred Years of Indigenous Resistance in Quito (Ecuador). In 2000, the First Continental Summit of Indigenous Peoples took place in Mexico, followed by a Second Summit in Ecuador (2004), a Third in Guatemala (2007), and a Fourth in Peru (2009).  The process stirred up other continental venues like the Summit of Indigenous Communication, which held its second summit October 7-13 in Oaxaca (Mexico).

This Summit confirms that Indigenous politics are marked by their international savviness. Similarly to the world conferences staged by the United Nations, Indigenous Summits are meant to transform local concerns into global agendas. Yet unlike the UN, Indigenous Summits are no place for states. As the Declaration identified state-sponsored extractivism as one of its most urgent threats, it encouraged the politics of resistance against extractive projects on Indigenous territory to step up.

The Fifth Indigenous Summit took place in Colombia’s iconic resguardo (territory) La Maria de Piendamó, in the region with the most dynamic Indigenous politics. The Regional Indigenous Council of the Cauca (CRIC) joined forces with the local Misák people, putting 42 years of experience at play to produce a powerful weeklong event.

Over two thousand peoples from across the hemisphere attended. Summits remain mostly a Spanish-speaking affair with virtually no participation from English or Portuguese speaking societies. Surinam’s small delegation was a reminder of Caribbean absence. Spanish remains the lingua franca, and countries with strong ethno-politics are best represented. The two largest international delegations came from Ecuador and Bolivia, and women made two thirds of the Guatemala delegation.

Fewer people made it to La Maria de Piendamó compared to prior Indigenous Summits. It may be that the initial momentum of continental meets subsided like happened for the World Social Forum. It could also be international venues proliferated so rapidly that people now split attendance between too many concurrent summits. The Continental Summit of Indigenous Communication took place early October in Oaxaca and the World Conference of Indigenous Women in Lima late October. Lower attendance may also be due to the entrance of ethno-politics in state politics, with leaders like President Evo Morales entering politics as usual and others getting co-opted in governmental alliances.

Smaller crowds did not affect the event’s vibrancy. Politics and activism blended with art more than ever. Ritual ceremonies preserved a fire always burning, and the artist collective Minga Muralista painted resistance in murals. Under the slogan ‘our territories are not as they paint them,’ artists appropriated public spaces to inspire alternative forms of contestation. Most nights, leaders left their political selves behind to celebrate the hemispheric gathering in song and dance. In addition to chairs and microphones, organizers provided comfortable bedding in dormitories and tents, clean washing facilities, and three kitchens that worked non-stop to feed all participants three meals a day at no cost.

One of the Summit’s highlights was the Indigenous Guard. Operating on a voluntary basis and inclusive of men and women of all ages, the Guard is a highly respected authority that secures Indigenous territory from the country’s violent civil war. There are currently about 30 thousand Indigenous guards defending Indigenous communities from guerillas and paramilitaries across Colombia (and helping the organization of Indigenous marches and festivities). Over one hundred guards secured the summit; their anthem became a musical hit.

The week started with the Second Continental Summit of Indigenous Women, parallel to the Third Meeting of Indigenous Youth; a ritual ceremony marked the launching of the Fifth Summit midweek. All events had the same format: after the official opening, delegates broke up in thematic workshops for a day, regrouping the next day for a larger plenary session defining official declarations. All venues reiterated pledges to strengthen continental coordination, notably creating Continental Councils. The closing plenary reiterated the Summit’s declarations and elected Honduras as the host of the Sixth Summit.

Calls to Action and Accountability

Nearly 300 optimistic youths (a third of the Ecuadoran delegation) discussed economic vulnerability in the face of aggressive capitalism, territorial invasion by extractive and transgenic industries, the repeated negation of cultural identity by dominant societies, and the urgency in reforming a still colonial education system that invalidates ancestral knowledge. Pushing for a Summit of their own, their mandate called for the creation of leadership schools and a hemispheric youth communication team.

The Second Women’s Summit, in turn, was a call to coherence and accountability within the Indigenous movement. After two days discussing collective rights, extractivism, access to justice, identity, and communication, its final plenary session announced a declaration calling for greater respect within communities.  The Indigenous principle of sumak kausay (good life), women urged, should be a practice instead of a discourse.

Women demanded effective measures to guarantee their access to justice and political participation within their communities. To do so, they proposed alternation between men and women in positions of leadership and a code to regulate access to positions of power by men with records of domestic abuse.

To states, they asked for greater participation in public policy and insisted on the need to coordinate Indigenous and ordinary legal systems. They called certain governments’ attention to women’s human rights. They denounced the governments of Mexico and Chile to stop the extreme violence against women in Chiapas and Mapuche territories; demanded to be included in Colombia’s current peace process. They also asked Bolivia’s government to compensate victims for the 2011 Chaparina repression, when police forces brutally repressed a peaceful march protesting the construction of a highway through the Indigenous territory of the TIPNIS.

The official Summit Declaration defined broad Indigenous agendas. It set internal goals to strengthen the Indigenous movement, praising the forceful contributions of youth and women and ratifying their Declaration. It encourages Indigenous practices of authority in the form of autonomous systems of justice, diplomacy, and education.

It also pressured states on specific fronts, for instance condemning Guatemala’s Constitutional Court for annulling the sentence against Rios-Mont. It denounced capitalism, in particular trade agreements, and development projects as destructive of Indigenous culture and territories, proposing to redefine economic models along the Indigenous concept of sumak kausay (good life). Further, it called on the UN to integrate Indigenous peoples in the 2014 World Conference on Indigenous Peoples.

The Declaration was compelling for its sense of urgency in resisting the violence, exploitation and displacement caused by extractive industries. Participants narrated similar experiences of criminalization from Mexico to Chile, ranging from assassinations to judicial persecution. Rates of human rights violations are increasingly alarming as the mining boom expands on Indigenous territories.

Various participants had been criminalized for their peaceful activism. Daniel Pascual, of Guatemala’s Committee of Peasant Unity, was attacked by a vicious media campaign and received many death threats for resisting evictions and the privatization of community lands. Carlos Pérez Guartambel, from ECUARUNARI in Ecuador, has been charged with terrorism and jailed for defending community water rights.

Violence is extreme in Colombia, where 80% of human rights violations are committed in mining and energy producing regions. Activist Adelinda Gómez Gaviria was assassinated in September for resisting AngloGold Ashanti mining in el Cauca; Pedro César García Moreno was shot dead early November for opposing an open-pit mine by the same corporation in Tolima. The 52 year-old traditional doctor Miguel Conda was assassinated just miles away during the Summit. The final plenary was interrupted as participants symbolically blocked the highway. The Minga Muralista helped paint the victim’s name on the pavement while others chanted slogans of resistance under the protective watch of the Indigenous Guard.

If the Guatemala Summit celebrated the arrival of Evo Morales to power, this Summit actively denounced the extractive policies pursued by governments that self-identify with the political left. More than once, workshops debated whether Indigenous governments should be allowed to participate. The presence of Bolivia’s Minister of Decolonization was so controversial that he restrained from delivering his speech at the opening ceremony.

Calling on states to stop extractive projects on Indigenous land is a necessary but insufficient diplomatic step.

The Summit defined legal and grassroots strategies to reclaim Indigenous land. First, the Declaration encouraged Indigenous peoples to intensify legal resistance, using international norms like ILO Convention 169 to sue governments at the Inter-American Court of Human Rights. Internationally, it demanded the UN to create a Universal Declaration of the Rights of Mother Earth. Locally it invited peoples to organize prior consultation, by and for communities if governments refuse to fulfill their obligations.

Second, the Declaration invited communities to practice the internationally recognized right to self-determination. In particular, it invited communities to practice their authority over territory, physically defending their land against the invasion of mining companies and police forces. Colombia’s Indigenous Guard was invoked as a model that should inspire similar efforts in other areas of the Abya Yala. Last but not least, the Declaration called for continental mobilization against extractivism on October 12, reclaiming Columbus Day as the International Day of Indigenous resistance.

Despite its achievements, this Summit is not intended to be a milestone. Rather, it is one more brick in the long resilient and arduous struggles Indigenous movements have led for centuries to secure the survival of their livelihoods.

Manuela Picq is a Member of the Institute for Advanced Study (Princeton) and Professor at Universidad San Francisco de Quito (Ecuador).