Liberation Theology, the CIA, and the Vatican: A New Direction for Latin America?

The United States has long used the Vatican as an instrument of foreign policy in Latin America. As the first pope from the Americas, the election of Jorge Mario Bergoglio could signal a new direction for the Catholic Church.

The United States has long used the Vatican as an instrument of foreign policy in Latin America. Will the election of a Cardinal from Argentina change anything?

As the first pope from the Americas, the election of Jorge Mario Bergoglio could signal a new direction for the Catholic Church, particularly in regard to Latin America. The choice of the name Francis may indicate his dedication to tendencies of the church that highlight the importance of solidarity with the poor. Also, as the first Jesuit to hold the church’s highest position, there is speculation that he may incorporate the order’s practices into the church. 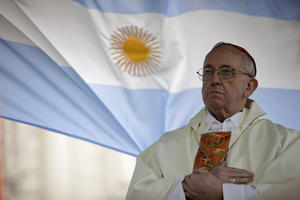 How will the election of a clergyman from Argentina affect Latin America? This move could be particularly consequential regarding the influence the United States has had over the Vatican’s policy in the region.

Although far from Rome, the lives of Latin Americans have long been influenced by the decisions of the Vatican. Fifty years ago, Latin America was more than 90% Catholic. Today that percentage has diminished, but the region is still home to almost 40% of the world’s Catholics—more than the United States and Europe combined. Clearly the direction of the Catholic Church has had major consequences for Latin America.

The Catholic Church took a progressive turn in the middle of the 20th century. In 1959, months after his election, Pope John XXIII undertook what would become known as the Second Vatican Council. Many say these were the most radical reforms the church had undergone in almost half a millennium. These changes imbued Catholicism with a sense of inclusion, as evidenced by a major change allowing mass to be given in parishioners’ own language instead of Latin. In the early 1960s, John XXIII brought together all the bishops of the world for a meeting in Medellin, Colombia. This meeting, and the general reforms under the Second Vatican Council, facilitated the rise of Liberation Theology in Latin America.

Tapping into demands of social movements across the world for more inclusion, this new direction for the church underscored the empowerment of the poor and marginalized within a theological framework. The next Pope, Paul VI, continued the progressive stance of the Vatican, even encouraging the pious in Latin America to oppose military dictatorships in their countries. The influence of Liberation Theology in Latin America is embodied most powerfully in the figure of Bishop Oscar Romero. Speaking out against the brutal military dictatorship in his country, El Salvador, Romero advocated for the poor and was an outspoken supporter of democratic reforms. In March of 1980, under the orders of the Salvadoran military high command, Bishop Romero was shot and killed while leading an evening mass.

The death of Bishop Romero demonstrates that not everyone embraced this horizontalist gospel of liberation. Particularly during the Cold War in the United States, certain sectors believed that “preaching Good News to the Poor was dangerous,” and soon Liberation Theology was seen by some as an enemy akin to communism.

The CIA was the primary instrument used to influence the church. A year-long investigation by Mother Jones magazine in 1983 revealed that after World War II the CIA “passed money to a large number of priests and bishops—some of whom became witting agents in CIA covert operations,” even creating a special unit devoted to working with the Vatican. In the 1970s the CIA began supplying information on practitioners of radical religion and sat by as 850 nuns and clergy were tortured, killed, or arrested. Its main strategy was to divide the church between progressive and conservative elements.

The CIA funded various conservative religious groups throughout Latin America, including Opus Dei members in Chile who subsequently entered into Pinochet’s administration after the 1973 coup, as well as funding the Bolivian Interior Ministry at the time it drew up and disseminated the “Banzer Plan,” which called for the persecution of progressive priests and clergy. The United States saw Liberation Theology as a threat that signaled Latin America’s move toward Marxism. The fight against progressive elements in the church was seen as another battlefront in the Cold War.

Pope John Paul II’s election signaled a major shift in the church’s doctrine. While initially indicating that he too was sympathetic to the plight of the poor, his conservative leanings soon became apparent. Throughout his papacy he increasingly alienated the more progressive elements in the church. In 1981, John Paul II attempted to quell the progressive Jesuit clergy by appointing a conservative to head the order. Two years later, he appointed Colombian Alfonso Lopez Trujillo, an Opus Dei member staunchly opposed to Liberation Theology, as a Cardinal. That same year during his visit to Nicaragua, the Pope criticized practitioners of Liberation Theology and even silenced a raucous crowd who had come to see him speak.

His outspoken opposition to Communism garnered the favor of U.S. President Ronald Reagan, who in the first months of being elected called a National Security Council meeting to address the “threat” of Liberation Theology. While John Paul II on one hand criticized leftist factions of the church’s involvement in politics, he undertook a crusade with Reagan to “to hasten the dissolution of the Communist empire.” While this relationship focused primarily on supporting the Solidarity movement in Poland, the National Security Council staff charged with this campaign also utilized this relationship to quell the leftist tendencies in Latin America.

Pope Benedict kept the church on this conservative course. He has been accused of removing dozens of priests and bishops because of ties to Liberation Theology and other progressive elements. He is generally viewed as helping to move the church away from the reforms implemented under the Second Vatican Council.

The Catholic Church now has an opportunity to change direction. A pope from Latin America could shed the yolk of U.S. influence to better steer the region in a direction that is good for Latin Americans, instead of dictating what is best for U.S. interests. The Second Vatican Council and Liberation Theology confronted many of the most pressing problems of the 1960s—inequality, poverty, and political repression. Today the world has changed, but many of the same issues we face seem similarly insurmountable.  People in Latin America—and indeed worldwide—are charged with finding solutions to mitigate violence, inequality, and environmental challenges. To quote the economist Jeffrey Sachs, “these aren’t economic questions, but moral questions.” Hopefully Pope Francis will remember his namesake and Jesuit roots to imbue these debates with this much needed morality.

Kyle Barron is a graduate student in comparative politics at New York University and an Associate Editor at NACLA.