You may not know it from reading or listening to the major U.S. media, but the rest of the world has been steeped in news coverage of a former Guatemalan head of state recently on trial in a national court (though proceedings are currently on hold) for genocide and crimes against humanity. The accused, General Efraín Ríos Montt, was one of the most vicious mass killers the United States—or Israel—ever produced.

You may not know it from reading or listening to the major U.S. media, but the rest of the world has been steeped in news coverage of a former Guatemalan head of state recently on trial in a national court (though proceedings are currently on hold) for genocide and crimes against humanity. The accused, General Efraín Ríos Montt, was one of the most vicious mass killers the United States—or Israel—ever produced.

Known as “Brother Efraín,” a fundamentalist convert of the California-based “Church of the Word” (Verbo), Rios Montt thanked his God in heaven for anointing him as Guatemala’s president, but on earth he thanked Israel for establishing his March 1982 military coup. Israeli press reported that 300 Israeli advisors helped execute the coup, which succeeded so smoothly, Brother Efraín told an ABC News reporter, “because many of our soldiers were trained by Israelis.” Through the height of la violencia (“the violence”) or desencarnacíon (“loss of flesh, loss of being”), between the late 1970s to early 1980s, Israel assisted every facet of attack on the Guatemalan people. Largely taking over for the United States on the ground in Guatemala (with Washington retaining its role as paymaster, while also maintaining a crucial presence in the country), Israel had become the successive governments’ main provider of counterinsurgency training, light and heavy arsenals of weaponry, aircraft, state-of-the-art intelligence technology and infrastructure, and other vital assistance. 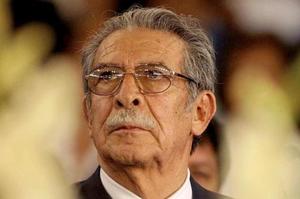 At the time, Rios Montt defended his war against the “guerrilla,” indistinguishable from civilian noncombatants, in this way: “Look, the problem of the war is not just a question of who is shooting. For each one who is shooting there are ten working behind him.” Rios Montt’s press secretary added: “The guerrillas won over many Indian collaborators. Therefore, the Indians were subversives, right? And how do you fight subversion? Clearly, you had to kill Indians because they were collaborating with subversion. And then they say, ‘You’re massacring innocent people’. But they weren’t innocent. They had sold out to subversion” (Witness to Genocide, Survival International, 1983, p. 12). Or, as one of Brother Efaín’s Verbo pastors explained to a delegation of Pentecostals from California about the regime’s awesome benevolence: “The army doesn’t massacre Indians,” the Verbo pastor assured the visitors. “It massacres demons, and Indians are demons possessed; they are communists.”

A February 1983 CBS Evening News with Dan Rather program reported, Israel “didn’t send down congressmen, human rights activists or priests” to strengthen Israel’s special relationship with Guatemala. Israel “taught the Guatemalans how to build an airbase. They set up their intelligence network, tried and tested on the [Israeli-occupied Palestinian] West Bank and Gaza, designed simply to beat the Guerilla.” Time magazine (03/28/83) chimed in that Guatemalan army “outposts in the jungle have become near replicas of Israeli army field camps.” At one of these Israeli outposts replicated in Huehuetenango (among the areas hardest hit by the genocide, with the second highest number of massacres registered by a UN truth commission), Time continues: “Colonel Gustavo Menendez Herrera pointed out that his troops are using Israeli communications equipment, mortars, submachine guns, battle gear and helmets.” Naturally, as Army Chief of Staff Benedicto Lucas García had stated previously: “The Israeli soldier is a model and an example to us.”

Today’s Guatemalan power elite, firmly rooted in the same lineage of death squads that ravaged the country for decades, continues to gaze on this legacy with adoration. “If there is thriving agriculture—it’s an Israeli contribution,” hailed Guatemala’s Congressional speaker in 2009 when his government body bestowed its highest honor to Israel, adding further praise for Israel having shared its “rich experience” in security, education, and medicine over the years.

Investigative journalist Allan Nairn interviewed current Guatemalan President Otto Perez Molina when Molina was Rios Montt’s commander carrying out the genocide in the Nebaj area. At one point in the filmed 1982 interview, Molina shows Nairn one of his army’s artillery mortars, answering that the brand of weapon and its ammunition were provided by Israel. 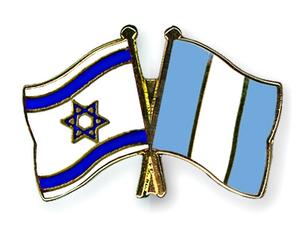 Apart from lasting accolades by Guatemala’s leaders, Israel’s participation in the repression is remembered somewhat differently by its victims, and by the children of its victims. An inter-generational memory is invoked in ongoing coalition work by students in the United States. Activists include undocumented students and young citizens alike, of Palestinian and Maya-Huehuetenango descent. Activities by organized groups cross-pollinate throughout related social struggles. They resonate from the curves of history and offer us ways to move full circle to justice.

One such bend in history can be found in a refugee-led movement that focused on the Right of Return among tens of thousands of displaced Guatemalans who, for a generation, had been living in refugee camps throughout Southern Mexico. Voices of the Guatemalan movement defended a range of issues, from de-militarization of the country to gender equality within the camps. María García Hernández, co-founder of a refugee women’s organization called Mama Maquín, described the standpoint of her group: “The Guatemalan refugee and returnee women are clear about the fact that land is the most important family possession that we have. Land is…a space where we can live and work, defend our rights and pass on our culture, customs and languages to our daughters and sons.” Such sentiment and connection to the land resounds with those of the Palestinian struggle for liberation and return.

García Hernández, whose community called for “all women of the world to fight together for a world with equality and justice,” added reflections of resilience in confronting the present and the future: “We face, with our families, the challenges of coping with the losses of war and exile….All women and men can help search for ways great and small to lead us to a resolution of our most urgent needs and the wish of all humanity to have a world of justice and peace.”

Gabriel M. Schivone is an ad hoc Steering Committee member of National Students for Justice in Palestine. He is the author of the forthcoming title, In DREAMs and Genocide Denial: U.S. Immigration and the Destruction of Guatemalan Life.