Obama in Mexico Amidst Demands for Migrant Rights

On Friday, May 3rd, President Obama gave a speech in the National Anthropology Museum in Mexico City. Speaking to a small crowd of mostly Mexican students, Obama said that the time has come for the U.S. public to look beyond the “sensational headlines” of violence associated with the drug trade and for the United States and Mexico to begin working together on “mutual interests and [with] mutual respect.”

President Obama said that the time has come for the U.S. public to look beyond the “sensational headlines” of violence associated with the drug trade that dominate most news about Mexico and for the United States and Mexico to begin working together on “mutual interests and [with] mutual respect.”

The U.S. President also admitted that much of the violence which occurs in Mexico stems from drug consumption in the U.S. and the southward flow of weapons from the United States to Mexico. During his speech in Mexico City, Obama pledged to do everything in his power to pass stricter gun controls in the United States to stop this current trend.

“We’re a nation of laws,” Obama said, “but we’re also a nation of immigrants.” The President vowed to pass comprehensive immigration reform by year’s end that would legalize undocumented immigrants, reduce the time that new immigrants would have to wait in order to bring family members to the United States, and increase labor protections for vulnerable migrant workers who are often exploited by employers.

The President acknowledged that solving the current immigration problem would also require working with the Mexican government. On that note, Obama outlined an ambitious, five-step plan that called for expanding trade and commerce between the two countries, working together to create more clean energy to stop climate change, and foster student exchanges. The President set a goal to bring 100,000 Latin American students to study abroad each year and 100,000 U.S. students to Latin America.

Hours after Obama spoke, a crowd of approximately 100 students, activists, and former migrants gathered outside the U.S. Embassy in Mexico City to protest the record number of deportations—409,849 immigrants—from the United States in the fiscal year of 2012. The event was organized by Migrant Families Popular Assembly (APOFAM) and the Acción Migrante campaign which calls for human rights to be the focus of immigration reform proposals. 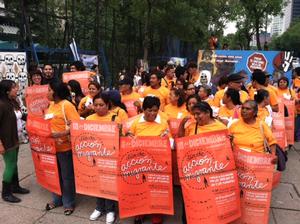 The protest came just days after armed men attacked upwards of 10 migrants traveling to the United States on a freight train in the southern Mexican state of Veracruz. The men demanded a fee of $100 from each migrant in order to continue their journey north.

“Mexico and the U.S. have become countries united in brotherhood, because many families now live in each country,” said Itzel Polo of APOFAM. “Migration is an issue that now affects everyone in both Mexico and the United States, even if we don’t have family members who are migrants.”

Riot police behind the walls of the U.S. embassy looked on as Mexican students stenciled t-shirts and signs with spray painted images of Monarch butterflies, which migrate between the United States and Mexico each year and whose image has become a symbol for Mexican activists who call for increasing migrants’ rights.

“Obama is well-aware of the fact that he won the 2012 election because of the Latino vote,” said Benjamin Escobar, a Mexican from the state of Tlaxcala who spent 12 years working in New Haven, Connecticut as an undocumented migrant. “We’re here outside the Embassy so that Obama complies with his promise to pass immigration reform and stop separating families, but also to show Americans that we’re good people. We don’t rob, we’re just hard workers.”

“These visits abroad that presidents make just serve their own interests, they make promises, but they don’t care about the people,” Escobar said, as the protesters began marching down Paseo de la Reforma, Mexico City’s main drag.

As the protestors moved on, I hopped in a cab and headed to Colonia Pino Suárez, an impoverished neighborhood on the western edge Mexico City where I volunteer at a shelter for Central American migrants, many of whom have been injured while traveling on Mexican freight trains or kidnapped by drug cartels. 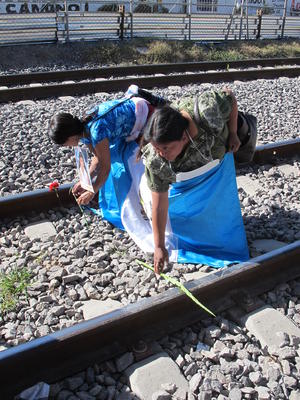 Central American women lay down flowers in remembrance of migrants.

At the shelter, I helped make dinner with Ivis, a 27-year-old migrant from Honduras who grew up and went to high school in Austin, Texas, but never became a naturalized U.S. citizen. A year ago, Ivis was arrested and deported when he tried to pay a traffic ticket he received for driving without a license.

“I tried to be a good citizen, following all the rules, when I went to pay the ticket,” Ivis said. “Instead, they deported me back to Honduras and separated me from my partner and our four-year-old son.”

Ivis hopped freight trains across Mexico to the U.S. border in an attempt to reunite with his family. He was captured by U.S. Border Patrol near Eagle Pass, Texas and deported back to his home city of San Pedro Sula, Honduras, the city which currently holds the honor of having the world’s highest murder rate.

These days, the migrant shelter in Mexico City where I volunteer is filled to maximum capacity. Most of the migrants, who come from Central America, abandoned homes and businesses because they could no longer afford to pay the local gangs, who often work with Mexican drug cartels, that demand bribes to maintain their businesses. Many who refuse to pay the bribes are killed.

Earlier that morning, I sat in the National Anthropology Museum and watched Obama pledge to stop violence associated with the drug trade and reunite immigrant families. For millions of people who actually live in Mexico and Central America, these reforms can’t come soon enough.