The New York Times on Venezuela and Honduras: A Case of Journalistic Misconduct

As a careful examination of the language and coverage of nearly four years of New York Times articles reveals, concern for freedom and democracy in Latin America has not been an honest concern for the liberal media institution.

The day after Venezuelan President Hugo Chávez died, New York Times reporter Lizette Alvarez provided a sympathetic portrayal of “outpourings of raucous celebration and, to many, cautious optimism for the future” in Miami-Dade County, Florida. Her article, “Venezuelan Expatriates See a Reason to Celebrate,” noted that many had come to Miami to escape Chávez’s “iron grip on the nation,” and quoted a Venezuelan computer software consultant who said, bluntly: “We had a dictator. There were no laws, no justice.”1 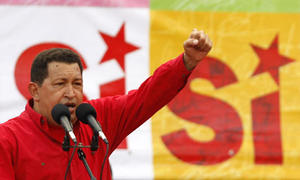 A credulous reader of Alvarez’s report would have no idea that since 1998, Chávez had triumphed in 14 of 15 elections or referenda, all of which were deemed free and fair by international monitors. Chávez’s most recent reelection, won by an 11-point margin, boasted an 81% participation rate; former president Jimmy Carter described the “election process in Venezuela” as “the best in the world” out of 92 cases that the Carter Center had evaluated (an endorsement that, to date, has never been reported by the Times).2

In contrast to Alvarez, who allowed her quotation describing Chávez as a dictator to stand uncontested, Times reporter Neela Banerjee in 2008 cited false accusations hurled at President Obama by opponents—“he is a Muslim who attended a madrassa in Indonesia as a boy and was sworn into office on the Koran”—but immediately invalidated them: “In fact, he is a Christian who was sworn in on a Bible,” she wrote in her next sentence.3 At the Times, it seems, facts are deployed on a case-by-case basis.

The Times editorial board was even more dishonest in the wake of Chávez’s death: “The Bush administration badly damaged Washington’s reputation throughout Latin America when it unwisely blessed a failed 2002 military coup attempt against Mr. Chávez,” wrote the paper, concealing its editorial board’s own role in blessing that very coup at the time. In 2002, with the “resignation [sic] of President Hugo Chávez, Venezuelan democracy is no longer threatened by a would-be dictator,” declared a Times editorial, bizarrely adding that “Washington never publicly demonized Mr. Chávez,” that actual dictator Pedro Carmona was simply “a respected business leader,” and that the U.S.-backed, two-day coup was “a purely Venezuelan affair.”4

The editorial board—an initial champion of the de facto regime that issued a diktat within hours to dissolve practically every branch of government, including Venezuela’s National Assembly and Supreme Court—would 11 years later brazenly criticize Chávez after his death for having “dominated Venezuelan politics for 14 years with authoritarian methods.” The newspaper argued that Chávez’s government “weakened judicial independence, intimidated political opponents and human rights defenders, and ignored rampant, and often deadly, violence by the police and prison guards.” After lambasting Chávez’s record, the piece concluded that the United States “should now make clear its support for democratic and civilian transition in a post-Chávez Venezuela”—as if Chávez were anyone other than a fairly elected leader with an overwhelming popular mandate.

But there is a country currently in the grip of an undemocratic, illegitimate government that much more closely corresponds with the Times editorial board’s depiction of Venezuela: Honduras, which in 2009 suffered a coup d’état that deposed its freely elected, left-leaning president, Manuel Zelaya.

While the Times criticized Chávez for weakening judicial independence, the newspaper could not be bothered to even report on the extraordinary institutional breakdown of Honduras, when in December 2012, its Congress illegally sacked four Supreme Court justices who voted against a law proposed by the president, Porfirio Lobo, who himself had came to power in 2009 in repressive, sham elections held under a post-coup military dictatorship and boycotted by most international election observers.

When it comes to intimidation of political opponents and human rights defenders, Venezuela’s problems are almost imperceptible compared with those of Honduras. Over 14 years under Chávez, Venezuela has had no record of disappearances or murders of such individuals. In post-coup Honduras, the practice is now endemic. In one year alone—2012—at least four leaders of the Zelaya-organized opposition party Libre were slain, including mayoral candidate Edgardo Adalid Motiño. In addition, two dozen journalists and 70 members of the LGBT community have been killed since the coup, including prominent LGBT anti-coup activists like Walter Tróchez and Erick Martinez (neither case was sufficiently notable so as to warrant a mention in the Times).

And although the Times editors decried police violence in Venezuela, the Honduran police systematically engage in extrajudicial killings of their own citizens. In December 2012, Julieta Castellanos, the chancellor of Honduras’s largest university, presented the findings of a report detailing 149 killings committed by the Honduran National Police over the past two years under Porfirio Lobo. In the face of over six killings by the police a month, she warned, “It is alarming that the police themselves are the ones killing people in this country. The public is in a state of defenselessness and impunity.”5 Such alarm is further justified by Lobo’s appointment of Juan Carlos “El Tigre” Bonilla as director of the National Police, despite reports that he once oversaw death squads.6

Finally, the Times editorial board lamented Venezuelan prison violence. But consider for context that the NGO Venezuelan Prisons Observatory, consistently critical of Chávez, reported 591 prison deaths in 2012 for the country of 30 million.7 In Honduras, a country with slightly more than a quarter of Venezuela’s population, over 360 died in just one incident—a 2012 prison fire in Comayagua, in which prison authorities kept firefighters from handling the conflagration for 30 crucial minutes while the inmates’ doors remained locked. According to survivors, the guards ignored their pleas for help as many burned alive.8

Given the contrast in the two countries’ democratic credentials and human rights records, obvious questions arise: How has The New York Times portrayed Venezuela and Honduras since Honduras’s 2009 coup d’état? If, in both its news and opinion pages, the Times regularly prints accusations of Venezuelan authoritarianism, what terminology has the Times employed to describe the military government headed by Roberto Micheletti, which assumed power after Zelaya’s overthrow, or the illegitimate Lobo administration that succeeded it?

The answer is revealing. For almost four years, the Times has maintained a double standard that is literally unfailing. Not a single contributor in the Times’ over 100 news and opinion articles has ever referred to the Honduran government as “autocratic,” “undemocratic,” or “authoritarian.” Nor have Times writers ever once labeled Micheletti or Lobo “despots,” “tyrants,” “strongmen,” “dictators,” or “caudillos.”

At the same time, from June 28, 2009, to March 7, 2013, the newspaper has printed at least 15 news and opinion articles in which its contributors have used any number of the aforementioned epithets for Chávez.9 (This methodology excludes the typically vitriolic anti-Chávez blog entries that the paper features on its website, as well as print pieces like Lizette Alvarez’s, which quote someone describing Chávez as a dictator.)

During this period, the paper’s news reporters themselves have referred to Chávez as a “despot,” an “authoritarian ruler,” and an “autocrat”; its opinion writers have deemed him a “petro-dictator,” an “indomitable strongman,” a “brutal neo-authoritarian,” a “warmonger,” and a “colonel-turned-oil-sultan.” On the eve of Venezuela’s October elections, a Times op-ed managed to call the Chávez administration “authoritarian” no fewer than three times in 800 words.10 And Chávez’s death offered no reprieve from this tendency: On March 6, reporter Simon Romero wrote about Chávez’s gait—he “strutt[ed] like the strongman in a caudillo novel”—and concluded that Chávez had “become, indeed, a caudillo.”11 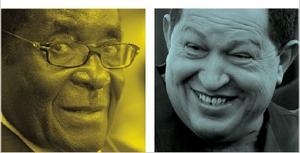 These most basic violations of journalistic standards—referring to a democratically elected leader as a ruler with absolute power—does not simply end with its writers. On July 24, 2011, Bill Keller, then the newspaper’s executive editor, wrote the piece, “Why Tyrants Love the Murdoch Scandal,” which included a graphic of Zimbabwe’s Robert Mugabe side by side with Chávez. Keller referred to them both when he concluded, “Autocrats will be autocrats.”12

But if despotism, defined as the cruel and oppressive exercise of absolute power, is to have any meaning, it must apply to the Honduran government, whose military—not just its police—routinely kills innocent civilians. On May 26, 2012, for example, Honduran special forces killed 15-year-old Ebed Yanez, and high-level officers allegedly managed its cover-up by dispatching “six to eight masked soldiers in dark uniforms” to the teenager’s body, poking it with rifles, and “[picking] up the empty bullet casings” to conceal evidence that could be linked back to the military, according to the Associated Press.13

The paradox of the Times—its derisive posture toward what it considers antidemocratic tendencies in Venezuela as it simultaneously avoids the same treatment of Honduras’s inarguable repression—can only be explained by one crucial factor: Honduras has been a firm U.S. ally since Zelaya’s overthrow. 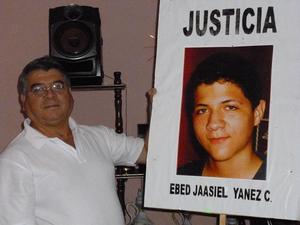 In fact, the unit accused of killing Yanez was armed, trained, and vetted by the United States—even its trucks were donated by the U.S. government. As the AP further reported, in 2012, the U.S. Defense Department appropriated $67.4 million for Honduran military contracts, with an additional “$89 million in annual spending to maintain Joint Task Force Bravo, a 600-member U.S. unit based at Soto Cano Air Base.” Furthermore, “neither the State Department nor the Pentagon could provide details explaining a 2011 $1.3 billion authorization for exports of military electronics to Honduras.”14

The Times’ scrupulous, unerring record of avoiding disparaging characterizations of Honduras’s human-rights-violating government may explain why it has never once made reference to 94 Congress members’ demand that the Obama administration withhold U.S. assistance to the Honduran military and police in March 2012. Nor has the paper reported on 84 Congress members’ letter to Secretary of State Hillary Clinton later that year, condemning Honduras’s “institutional breakdown” and “judicial impunity.”15

When evaluating the newspaper’s relative silence on Honduras, it is worth imagining if Chávez were to have ascended to power in as dubious a manner as Lobo; if for years Venezuela’s government permitted its security apparatus to regularly kill civilians; or if the Chávez administration presided over conditions of impunity under which political opponents and human rights activists were disappeared, tortured, and killed.

As a careful examination of the language and coverage of nearly four years of New York Times articles reveals, concern for freedom and democracy in Latin America has not been an honest concern for the liberal media institution. The paper’s unwavering conformity to the posture of the U.S. State Department—consistently vilifying an official U.S. enemy while systematically downplaying the crimes of a U.S. ally—shows that its foremost priority is to subordinate itself to the priorities of Washington.

Keane Bhatt is a regular contributor to the Media Accuracy on Latin America (MALA) section of NACLA Report and the creator of the Manufacturing Contempt blog on nacla.org.