The United Nations negotiations on climate change took place last November in Warsaw, Poland. As climate finance and “loss and damage” payments dominated the agenda, indigenous peoples’ groups fought to be heard. While some groups discussed their experiences with the current UN proposals, COICA proposed an alternative: “REDD+ Indigena.” 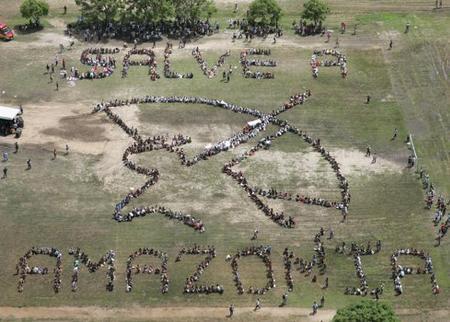 In 2009, Members of Indigenous Organizations Including COICA Gathered to Form a Human Banner. Photo Credit: www.galdu.org

One of the most vocal and visible indigenous groups at the UN climate talks, COICA (The Coordinator of Indigenous Organizations of the Amazon) was founded in 1984 as the umbrella group for more than 350 indigenous organizations in nine different countries. It works to address issues of human rights, self-determination, and natural resource protection.

While other groups such as the Asia Indigenous People’s Pact discussed their experiences with “REDD+” (Reducing Emissions from Deforestation and Degradation)—a mechanism that, as it stands now, creates a financial value for the carbon stored in forests, and thus provides developing countries an incentive to reduce deforestation—COICA actually proposed an alternative: “REDD+ Indigena.” The COICA alternative promotes the protection of social, environmental, and indigenous rights, as well as the conservation of the Amazon through sustainable management practices.

From REDD to REDD+

Since 2005, the UN negotiations have made deforestation part of the agenda, as the clearing of forests alone contributes to almost 20% of global greenhouse gas emissions. In 2007, the negotiations began focusing on a mechanism called “REDD,” whereby developed countries compensate developing countries for reductions in their emissions from deforestation and forest degradation. The mechanism allows industrialized nations to offset their emissions by paying communities in developing countries to protect the forest and prevent the carbon stored in them from being released into the atmosphere. As such, REDD transforms the storing capacity of forests into a commodity, and allows landowners to sell carbon credits in international markets. The REDD mechanism shortly thereafter became known as REDD+, when negotiators broadened the program to cover not only the climate change mitigation aspect of forests, but also the co-benefits of conservation and sustainable management.

According to a UN report, the impact of REDD+ on indigenous communities will depend on how local implementation follows rules regarding access to information, prior and informed consent, and governance. But critics of REDD+ argue that by only focusing on carbon, it fails to adequately serve the needs of indigenous communities by commodifying nature, displacing communities, and undermining sovereignty and autonomy of ancestral territories. COICA has criticized REDD+’s failure to address the real drivers of degradation and deforestation, pointing to the contradiction between the rhetoric of indigenous rights and the daily aggressions indigenous peoples face. “REDD+ cannot frame the indigenous agenda,” said COICA member Roberto Poveda.

The COICA alternative, REDD+ Indigena, borrows from Bolivia’s 2012 alternative to REDD+ called “The Sustainable Life of the Forest.” Both Bolivia’s and COICA’s proposals integrate mitigation and adaptation efforts, reject mercantilist approaches that promote voluntary carbon credit markets, and recognize developed nations’ ecological debt to the rest of the world. They call for a less vertical approach to climate-related decision-making, promoting a holistic management of the forest that takes into consideration culture, society, and nature.

COICA’s alternative stresses the importance of safeguards to ensure the protection and autonomy of indigenous territories. It prioritizes the role of indigenous peoples as stewards of the forest and of indigenous territories as effective barriers to protect biodiversity; partly in response to the mismanagement of Brazil’s Amazon Fund, a large portion of which is not even reaching indigenous populations, REDD+ Indigena opposes the role of national governments as funding intermediaries. It calls for the private sector to demonstrate its commitment to reduce emissions, and is extremely critical of the establishment of monocultures, or large-scale plantations, as a way to store carbon. REDD+ Indigena calls for a moratorium on extractive industries (hydrocarbons, mining), megaprojects (hydroelectric plants, highways), and agricultural industries (biofuels, transgenic products). In essence, REDD+ Indigena calls for a reduction to the ecological footprint through an approach based on consent and climate justice principles. COICA’s alternative challenges mainstream definitions of “development” and “infrastructure,” demanding structural changes to the REDD+ mechanism.

Despite the continued struggles by indigenous representatives to have their voices heard, the UN negotiations failed to incorporate their demands, and a decision defining the rules and technical details for REDD+ was approved at the 2013 conference, with praise by the UN Environmental Programme.

Indigenous Voices and "Collaboration" in Lima

COICA’s situation has been one characterized by “exclusion to possibilities of inclusion,” as representative Roberto Espinoza stated. Indigenous peoples are among the first to experience the impacts of climate change, yet their voices are often silenced during the decision making process.

Indigenous groups receive a limited number of credentials to participate in the UN talks and continue to face language barriers. They lack the funding and resources that large NGOs tend to have and do not have the ability to vote in decision-making processes that countries enjoy. (See here for information on the Abya Yala summit, an alternative indigenous summit that acknowledges these barriers to entry as the very apparatus of environmental degradation.)

However, COICA is optimistic that next year’s conference in Lima, Peru, will provide an opportunity to work towards more inclusive participation and to bridge the gap between indigenous groups and decision makers. In an early gesture toward indigenous inclusion, the Peruvian government has met to hear the demands of indigenous groups. Preliminary planning for the negotiations already includes an entire pavilion dedicated to indigenous populations, and approximately 2,000 indigenous leaders plan to be present. Jorge Gustavo Suarez de Freitas, a representative from the Peruvian Ministry of Environment, said: “Collaboration has not always been easy, but we recognize their constructive input.”

Though COICA is waiting to see how much substance is behind the Peruvian government’s claims toward “recognition,” they are preparing now to maintain consistent pressure on the Peruvian government, and they remain hopeful. Says Espinoza: “Next year has the potential of being a conference with indigenous flavor.”

Maria Camila Bustos is a researcher at the Climate and Development Lab and a member of the Brown Divest Coal Campaign. She attended the 2013 Warsaw negotiations.