"They are Telling the Story of the Border, But Nobody is Telling it Right"

Rodrigo Reyes talks about his new film, Purgatorio, eschewing the traditional border narrative in favor of an acutely personal and philosophical reflection. 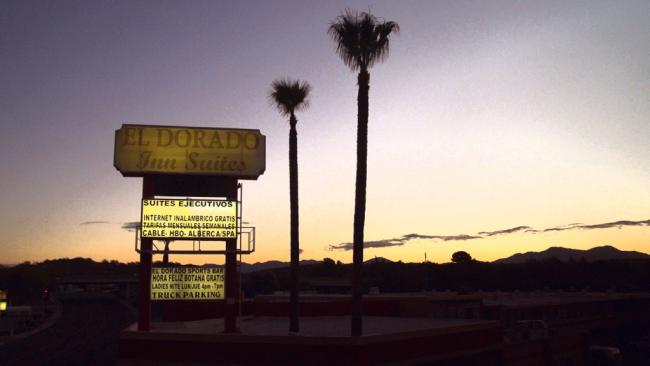 Mexican filmmaker Rodrigo Reyes’s latest documentary, Purgatorio: Journey into the Heart of the Border, eschews the traditional border narrative in favor of an acutely personal and philosophical reflection that explores the beauty and harsh brutality of the U.S.-Mexico border in an attempt to rethink the paradigm. It begins with Reyes asking the audience to “Try to imagine what the world was like many, many years ago, when borders didn’t exists.” Filmed over the course of four weeks, with a micro-crew of three that included Reyes, cinematographer Justin Chin, and sound mixer Jose Inerzia, the film essay captures powerful portraits of residents on both sides of the border. The striking cinematography of the lush desert landscapes forms the backdrop to vignettes that survey migration, violence, inequality, and the artificial construction of borders.

Born in Mexico City, Reyes grew up living and traveling between both countries and credits his upbringing as part of the inspiration for Purgatorio. In an interview on October 3, he told me that the project originated from “being a migrant, of saying: they are telling the story of the border, but nobody is telling it right. It’s not a place about which you can say ‘this is how it is.’ It’s a place that needs to be discovered. The border changes all the time.” Reyes was able to locate the subjects for the documentary with help from local activists and residents.

Interested in cinema from a young age, he didn’t consider becoming a filmmaker until after graduating from UCSD with a degree in international relations. “As soon as I earned my BA and diploma I said, now I’m going to make movies,” he told me. “Making cinema is the best film school. You have to do it and accept failure like a gift, so you may learn from those mistakes.” Purgatorio marks an evolution in his filmmaking process. He told me, “I’ve found out that one person with a camera doesn’t make a movie. It can be done, but one needs collaborators. I found my career as an interpreter and started saving money to produce Purgatorio, I hired collaborators with more experience than I had, and we created the film.”

Purgatorio recently completed a 60-city exhibition run in Mexico with free public screenings in alternative and public spaces. The nontraditional exhibition model allowed the documentary to reach a wider audience. During a trip to Tijuana for a screening, Reyes said he “saw things that deserve to be told in the sequel to Purgatorio. For example, there’s a place that feeds more than one thousand people a day, for free, and without government support.”

A self-taught filmmaker, Reyes’s past film projects focus on the Latino experience. In The 12th of December (2009), he followed pilgrims on their way to the shrine of the Virgin of Guadalupe. For his next film, 99 Years After the Mexican Revolution (2010), he asked bystanders for a reflection on the significance of the Mexican Revolution on its 99th anniversary. In his previous documentary, Memories of the Future (2012), Reyes followed the self-defense forces in the Mexican state of Guerrero.

His next film currently in post-production, Lupe Under the Sun, is a neorealist drama that focuses on an aging migrant contemplating his life spent working to support his family. Originally conceived of as a documentary, it evolved into a fictionalized account using non-actors, and was inspired by the stories of Reyes’s father working in agriculture in California’s Central Valley. The project was the winner of the Canon Filmmaker Award, which provided him with camera equipment. It was filmed this past summer in California with a small budget of $10,000. Working with such a limited budget has its benefits, Reyes explained. “With few resources, your ideas need to be well thought-out, debated, and discussed, so you can take advantage of the constraints.” Though the budget was limited, “the visual standards were high. We wanted it to look beautiful, for it to be a poem.” Lupe Under the Sun is poised to premiere next year.

José Raúl Guzmán is Assistant Director at Cinema Tropical, a non-profit organization dedicated to the distribution, programming, and promotion of Latin American cinema in the United States.