The Spectre of Ayotzinapa Haunts the Continent

The continental capitalist offensive in Mexico has been backed up by both state and private violence, and has produced many Ayotzinapas.

An earlier version of this article appeared on socialistproject.ca 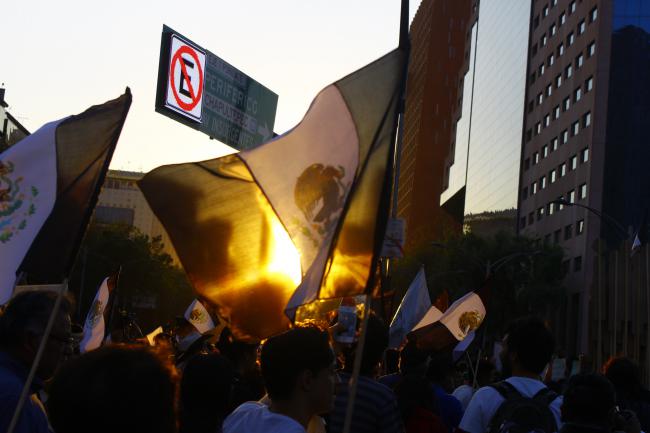 The Mexican government, welcomed as a partner of the Canadian and U.S. governments in continental economic development and security, also happens to partner in the slaughter of its own people. The murders and disappearances of the students from the Rural Normal “Raúl Isidro Burgos,” of Ayotzinapa, Guerrero, Mexico on September 26, 2014 in Iguala, was a crime of the state, as hundreds of thousands of Mexicans have claimed in their protests.

The governmental investigation that followed the September 2014 attack on these students has been deliberately incompetent and not aimed at getting to the roots of the crime that are, in fact, the tangled web of state-drug gang corruption and the state's dirty war in defense of the neoliberal transformation of Mexico. The investigation has been staged, quite ineffectively, as a public relations operation to calm foreign investors and to cool protests, efforts that have completely failed within Mexico. By claiming that the blame was at the local level (the corrupt collusion of a local mayor and his avaricious wife with a brutal cartel) the national government seeks to present itself as the defender of justice.

But as Luis Hernández Navarro shows in his article “La matanza de Iguala y el Ejército” (The Iguala Massacre and the Army), there is—and has long been—a deep entanglement between the army, the local government of Iguala, and drug production. Guerrero  accounts for more than 60% of the Mexican production of poppies and opium gum for making heroin, and the cities of Iguala and Chilpancingo are key centers for its storage and transportation.

Many in Mexico view the army as the de facto government of the state. As Francisco Goldman wrote in the New Yorker:

“The Mexican Army, according to many journalists and other commentators, is the real government authority in Guerrero State. ‘The army knows that state millimetre by millimetre,’ a Mexican legislator pointed out in a recent speech, ‘and they know minute by minute what's happening there.’”

The intertwining of the government and armed forces with the drug gangs has a long history in Guerrero. José Luis Abarca, the mayor of Iguala, Guerrero, who is now under arrest, was accused of ordering the attack and having links to the Guerreros Unidos drug gang. Last year he was also accused of ordering the murder of three protesters, but the investigation was not pursued.

Colonel Juan Antonio Aranda Torres, commander of the 27th Battalion in Iguala, claimed that he and his troops knew nothing of the Ayotzinapa attacks, although they took place within 100 meters of the army barracks. At the time, he was attending a fiesta organized by María de los Ángeles Pineda Villa, the wife of Mayor Abarca, now also accused of ordering the attack and being connected to drug gangs. Though Aranda Torres was trained as an intelligence and counter-intelligence officer, he claims to have seen nothing, heard nothing, and has said nothing.

This was not an isolated event. Unfortunately, torture, killings, and assassinations have become commonplace in Mexico with different levels of police or armed forces involvement, as well as drug gangs. The 27th Battalion participated in the dirty war of the 1970s and 1980s. Additionally, Human Rights Watch, in a 2011 report, “Ni Seguridad, ni derechos” (Neither Security Nor Rights), wrote that there is strong evidence that the 27th Battalion participated in the disappearance of six young people in Iguala in March 2010. These state crimes against humanity, sadly, are the rule, not the exception, in Mexico.

Several months earlier, in June 2014, the federal army carried out a mass execution of 22 young people in the town of Tlatlaya, in the neighboring state of Mexico. The army and the federal government then attempted to cover up these executions in Tlatlaya. After journalists and human rights groups exposed the cover-up and mass execution, the government arrested some low ranking soldiers.

Though we may never know the immediate motives for the killings and disappearances of the teachers college students, we do know that there has been a pattern of ruthlessly destroying opposition to the neoliberal transformation of Mexico. This has been as true in the sphere of education as it has been in natural resource development. The push by the World Bank as well as key business organizations in Mexico—as is also happening in Canada and the United States—to destroy teachers’ unions and teachers’ rights and privatize education, has led to an intensification of the attacks on the normales, the rural teachers colleges. These attacks have been underway for several decades but have recently intensified.

The Rural Normal “Raúl Isidro Burgos,” was part of a system of teachers’ colleges set up to recruit students from poor rural communities to become teachers and community organizers, a system founded during the Cárdenas presidency (1934-1940). These schools have a history of developing community leaders and union activists as well as a tradition of fighting for social justice and for the preservation of the land rights of their communities. Seventeen of the original 29 normales have already been shut down in spite of militant resistance from students, alumni, and the local communities. Ironically, the students from the Rural Normal “Raúl Isidro Burgos” were only passing through Iguala en route to Mexico City to participate in the annual October 2 march commemorating the 1968 massacre of student protesters in Mexico City.

While the most powerful business organizations in North America—Business Roundtable (BRT), the Canadian Council of Chief Executives CCCE), and the Consejo Mexicano de Hombres de Negocios (CMHN)—propose deeper and closer ties within North America, the Mexican state continues terrorizing its own population. The image of Mexico promoted by these three peak business organizations, their related think-tanks and the three governments of North America, is that of a Mexico at the edge of a great leap forward in economic development, democracy, and socio-political stability, developments being propelled by the “opening of Mexico” and the “free market.”

The punishing reality for the vast majority of Mexicans is state-enacted and state-tolerated slaughter of its own population to complement deteriorating living standards, deteriorating social rights, the loss of land rights, and the sell-off of natural resources. Mexico has been en route to becoming a paradise for foreign investors and a hell for the vast majority of Mexicans. The constitutional reforms passed in 2013-2014 and their implementing legislation have opened Mexico's oil to private development and increased the ability of the government and mining companies to dispossess rural communities from their lands. These recent reforms will continue attacks on the rights of the Mexican people unless they are derailed by the growth of today’s massive popular response to the Ayotzinapa massacre.

The Mexican national state has become more repressive while at the same time increasingly losing its monopoly on coercive power. The armed forces of the national state have grown tremendously since the Zapatista uprising of 1994, from 216, 943 in 1994 to 265,812 in 2014 (212,208 members of the army and 53, 601, of the navy). If we add the 57,000 members of various federal security agencies, which include 40,000 members of the counter-insurgency national police force, the PFP, created in 1999 largely from officers and soldiers from the armed forces and the five thousand members of the new federal gendarmerie, the federal forces now amount to 323,000 members.

However, there are several interrelated processes that undermine the monopoly on violence of the national state: 1) the fusion and/or co-optation by the drug gangs of local governments, including police forces, as well as sections of the national police and armed forces; 2) the growth of private-for-profit military forces working for big business (domestic and foreign) and the rich to protect them against sections of the state-cartel complex or to keep workers or local communities in line. The number of these private security personnel officially recognized by the government is around 90,000, including administrative personnel. However, there may as much as seven times that number if we include unlicensed security companies and many of their employees are thought by some analysts to be working with criminal gangs; 3) the massive size of well-armed drug gangs, now estimated to be about 500,000, though divided into many different irregular armies; and, 4) the significant and escalating growth of non-governmental community self-defense militias. Many of these militias are genuinely community-organized and have organized themselves to protect their communities against army and gang violence. Others started as or have been co-opted to be power instruments of local political bosses or economic elites. The government has developed others as counter-revolutionary paramilitary forces. Over the past twenty years, Mexico has become a society in arms, with most of the arms in the hands of state and private forces that continually carry out human rights violations with impunity.

The atrocities of September 26, 2014, in Iguala, Guerrero, shocked Mexican society as never before. Though Mexicans are sadly accustomed to constant reports of disappearances, killings, and mass graves, this event was the straw that broke the camel's back. Shock was followed by outrage and protests grew weekly, especially those of other college and university students. The tenacious militancy of the 43 missing students’ parents and relatives, who have been at the forefront of mobilizations, has inspired the protesters. Three caravans of parents and other family members of the 43 have traveled all over Mexico to share stories of losses and repression, and to demand the return of the 43 alive. They have received great solidarity on their journey. On November 20, the 104th anniversary of the start of the Mexican Revolution, these three caravans converged on the Zócalo of Mexico City, joined by marches from three different points in the city. Other demonstrations took place throughout Mexico and in many parts of the world.

The national government has tried many tactics to undermine the growing protests. First, it remained silent, then declared it a local problem, then feigned great efforts to find the culprits and the missing students, finally declaring the that the students were dead based on nothing but confessions, perhaps under torture, of members of the local drug gang. These tactics have backfired and have made people even more indignant. The government's hope that the protests would fade with time has not happened. The recent revelations that the president received a $7,000,000 house as a gift from a recipient of government contracts has also hit a nerve. The government is now employing a classic tactic of the Mexican regime—the use of provocateurs to carry out violent acts in order to prepare the justification for the possible use of violent repression, as the President recently threatened.

Mexico today is a country of dramatic contrasts and a burgeoning struggle between the barbarism being imposed on Mexico by the drug gangs, the capitalist classes, and governments of all three North American countries, and the desire for peace and social justice of ordinary Mexicans.

Richard Roman is Associate Professor Emeritus of Sociology at the University of Toronto, Associate Fellow of the Centre for Research on Latin America and the Caribbean, York University, and a member of Socialist Project and the Greater Toronto Workers’ Assembly. Edur Velasco Arregui is a professor in the Department of Law at the Universidad Autónoma Metropolitana in Mexico City, former Secretary-General of SITUAM (Sindicato Independiente de Trabajadores de la Universidad Autónoma Metropolitana—Independent Union of Workers of the Metropolitan Autonomous University), and a union activist. They are the authors of Continental Crucible: Big Business, Workers and Unions in the Transformation of North America.