Mexico’s energy reform is a historical rupture with its nationalist past. In spite of popular opposition, it has been pushed through by a powerful elite consensus in the United States and Mexico and by an alliance among all three major political parties. 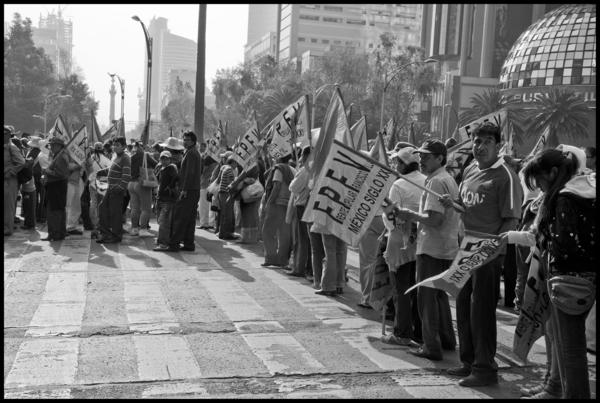 Activists from a leftwing organization wait to join a march against corporate reforms. Photo by David Bacon.

A key process in the integration of the Mexican and U.S. economies has long been the privatization of energy, a sector previously protected from privatization by Articles 27 and 28 of the Mexican Constitution and associated secondary laws. The legislation passed by the Mexican Congress last December has changed that protection and will make Mexican oil available to private national interests and the oil giants, thus favoring the energy strategy of the United States.

These changes have been promoted by the governments of both countries, and they would redefine the structure and operation of the Mexican energy sector, whose historical matrix emerged from the expropriation of foreign oil companies by General Lázaro Cárdenas in 1938 and which reserved activities in this strategic sector for the state.

The giant oil companies are not only pushing for this historical rollback in Mexico but also for further deregulation in the United States. The declining U.S. hydrocarbon reserves have been a clear competitive weakness for its energy-voracious economy. Its strategy since the first half of the 1970s has been to remedy this weakness by regionalizing energy supplies—that is, by incorporating the energy reserves of Mexico and Canada.

The North American Free Trade Agreement (NAFTA) was designed to “lock in” the neoliberal structural reforms in Mexico that began in 1982, as well as to intensify regional trade relations in North America. The NAFTA model was extended—with energy as the main objective—as the Security and Prosperity Partnership (SPP) that made U.S. national security interests the top priority of the relationship.

Through executive agreements, the SPP deepens free trade schemes, deregulation, and privatization policies, and allows common policies for the three NAFTA countries to be made without requiring ratification by the national legislative bodies of each country. Democratic processes are now replaced by executive imposition of neoliberal reforms.

The neoliberal structural changes are pushing Mexico towards a triple energy transition: 1) a difficult adaptation to the rising economic and social costs of extracting less accessible oil, 2) the reinforcement of an extreme dependence on hydrocarbons in the national energy matrix, and 3) the dominance of a single trading partner (the United States) in external energy relations.

There has been a slow but persistent movement during the last four Mexican administrations to change the historical framework of public energy enterprises (PEMEX and the Federal Electricity Commission, CFE) from enterprises that have been integrated up-stream and down-stream toward ones articulated only in segments of the energy chain. This trend is increasingly shared with private capital in the energy sector. The neo-colonial nature of this model is founded on Mexico’s export of crude oil and import of refined products. Such is the pattern of specialization, imposed by NAFTA, in the energy integration of Mexico with the United States.

Mexican export sales of crude oil grew 61% in the lead-up to and first years of NAFTA (1990-2000), 210% in the years of transition from NAFTA to SPP (2000-08), and fell 44% between 2008 and 2011, basically due to the fall in production. But the most significant fact is that oil exports as a percentage of production have remained constant, with an average of 53% for the full period. This is why, in a recently published article, Nora Lina Montes and I insist on characterizing NAFTA as a “predatory neocolonial” model.

The media has been making a remarkable effort to sell the idea of “double energy abundance” in North America. This is based on the increase in production of non-conventional hydrocarbons: shale oil and gas in the United States, tar-sands in Canada, and the prospect of Mexican shale-gas reserves and ultra-deep water oil in the Gulf of Mexico. This is the basis for the promise of a future of “energy independence in North America.” Certainly, the abundance of natural gas resources in the United States has been used to argue for their intensive exploitation, simply ignoring the growing discontent and social conflict over the consequences of “hydraulic fracking,” a devastating technology that severely contaminates the aquifers it creates.

It is precisely under the umbrella of the future energy independence of North America that neoliberals have highlighted factors blocking Mexican participation in that goal: Mexico reached a production peak of 3.4 billion barrels in 2003, but production fell significantly due to premature exhaustion of the gigantic Cantarell field, whose production was partially compensated for by another gigantic field, Ku-Maloob-Zap, although many doubts persist about the productive life of the latter.

As part of this media strategy, we have seen the promotion of a dualistic image of PEMEX. PEMEX is presented to foreign investors as the most important enterprise in the country: first in total sales internationally, second in profits before taxes internationally, fifth crude-oil producer in the world, and with lower costs than Exxon, Mobil, Petrobras, ENI, Chevron, and Statoil.

In contrast, PEMEX is presented to the Mexican public as a low-productivity, over-indebted enterprise, without the necessary experience or technology for oil exploitation in ultra-deep waters, as is the case in the borderline in the Gulf of Mexico and with the shale-gas deposits onshore. Additionally, critics claim that these limitations are aggravated by the prevalence of a nationalistic ideology among Mexico’s population and elites, which obstructs PEMEX from taking advantage of globalization. This is also mirrored in the strong dependence of public finances on oil revenues.

Bi-national elite agreements are reflected in the double deregulation of the present strategy: on the one hand, changes in the Mexican Constitution and secondary Mexican laws have been successfully promoted. These changes seek to remove state control of exploitation of natural resources and to open up the participation of private national and foreign entrepreneurs. For example, the United States and the big oil companies seek to take advantage of Mexico’s reforms and of the Trans-border Agreement (TBA), an agreement between the Mexican and U.S. governments to equitably share trans-boundary oil and gas reserves on the maritime border of the two countries. The United States had put a moratorium on oil and gas exploration on the maritime border until the Mexican government allowed for that exploration—and “equitable sharing”— to take place. The constitutional reform has now allowed for that exploration to begin.

The proposal for constitutional changes in articles 25, 27, and 28 made by Enrique Peña Nieto with PRI and PAN support is the domestic counterpart to the TBA. Both the TBA and the recently passed constitutional changes attempt to deregulate strategic activities, treating them as “simple commodities.” All this represents a structural change of the Mexican state. Congress will no longer have a role in the design or supervision of energy policies. Judicial Power will not have jurisdiction over dispute resolution mechanisms in hydrocarbons because this will be in the sphere of international courts. Power in relation to energy policies will be more concentrated in the executive branch of government, reinforcing authoritarian rule and extreme presidentialism. And last but not least, “national content” rules in oil production will be determined according to NAFTA rules.

The TBA and constitutional changes in Mexico will deregulate strategic energy activities, thereby opening up oil exploitation in ultra deep waters and “shale gas” on shore, both near the border line, to joint enterprises between private capital and Mexican state-owned companies.

Mexico’s energy reform is a historical rupture with its nationalist past. In spite of popular opposition it has been pushed through by a powerful elite consensus in the United States and Mexico and by an alliance among all three major political parties (PRI, PAN, and PRD). This neoliberal alliance has already led to the approval of labor, educational, fiscal, and energy reform, with political reform soon to come.

Fiscal and energy reform are closely interrelated. The former establishes the timing for the application of the latter. The process will be slow as long as oil incomes keep sustaining public finances. This explains why the Peña Nieto government insists that privatization of PEMEX is excluded from the project. Fiscal reform is crucial to energy reform, since the Mexican government will need to replace the annual revenues that will be lost due to the transformation of the oil industry. The speed and effectiveness of fiscal reform will condition the consequences of oil revenue loss for the government. If a big gap develops between fiscal revenues for the state, a fiscal crisis of the state could well emerge. The fiscal reforms seek to broaden non-oil fiscal income to 1.2% of GDP as oil income is reduced. In any case, growth and performance of the Mexican economy will be immediately affected negatively.

Massive protests against structural reforms have been spreading all over the country for nearly a year. Teachers, students, families, party members, trade unionists, peasants, intellectuals, artists, and popular urban organizations continue to organize and mobilize to stop and eventually reverse these policies. Wide segments of public opinion are against this process, and mass mobilizations in Mexico could become a model and stimulus for U.S. environmentalists, as the transformation of Mexico’s energy sector—especially with the emphasis on production in the Gulf of Mexico—poses grave environmental threats to both countries and to Mexico’s economy.

Predatory activities on natural resources will eventually increase, now affecting ultra deep waters and on-shore shale gas deposits. We can expect a dangerous increase in pollutants, increased pressure on scarce water supplies, greater environmental degradation, as well as serious negative effects on climate change. Let’s not forget that there are no national boundaries for the environment. Mexican popular movements and North American environmentalists need to be key elements in the battle over Mexican resources, and the coming battle against the Transpacific Partnership (TPP), another common menace that can be only mentioned here. The victory of big business could yet prove to be a very temporary one.

Alejandro Alvarez Béjar is a socio-economist and senior full-time professor at Economic Faculty-UNAM. He is a member of the ’68 Committee Pro-Democratic Liberties and of the Tri-national Coalition in Defense of Public Education.