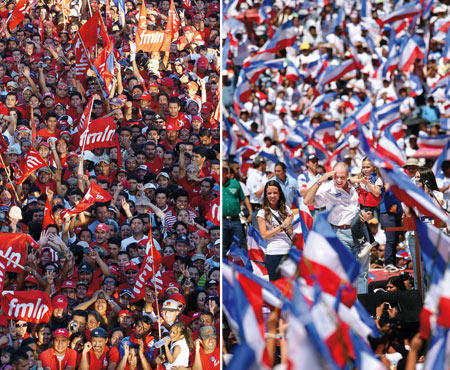 San Salvador —With 99% of votes counted, candidate for the governing Farabundo Martí national Liberation Front (FMLN) party, Salvador Sanchez Cerén, has won the first round of El Salvador’s 2014 presidential election, with ten-point lead over Norman Quijano of the Nationalist Republican Alliance (ARENA). Both candidates will head to a run-off on March 9.

As Laura Embree-Lowry reported for CISPES’ mission, “This has been a much more transparent and peaceful process than we’ve observed in the past.” Observers noted the positive impact of several steps taken by the Supreme Electoral Tribunal over the past four years to increase both voter access and transparency, especially the new neighborhood voting system, which was carried out throughout the entire country for the first time on February 2.

The mission reported several denouncements made to them throughout the day, primarily concerning voting centers that did not open to the public at 7:00 am as scheduled due to the lack of sufficient numbers of poll workers, but these incidents were characterized as minor anomalies.

Embree-Lowry noted, “CISPES has observed every election since the Peace Accords. Today’s election shows that the process of democratization in the country continues to advance.”

Supreme Electoral Tribunal president Eugenio Chicas announced that the final vote count will be formally announced on Tuesday, February 4th. None of the candidates have challenged the preliminary results; both Sánchez-Cerén and Quijano gave press conferences in San Salvador on Sunday night expressing satisfaction and hope for a victory on March 9.

The 70-person CISPES observer mission, together with the SHARE Foundation, U.S.-El Salvador Sister Cities, and other international organizations will issue their report on the election at a press conference on Tuesday in San Salvador. Please contact Janette Linares at +503-6150-9064 to schedule interviews with delegates.

CISPES was formed in 1980 as a national organization to support a more just and democratic society in El Salvador.