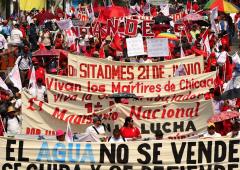 The FMLN's Mauricio Funes declared victory at 9:30 last night. His challenger from the incumbent, far-right ARENA party conceded defeat a few hours later, bringing an end to 20 years of one-party rule. Funes will become El Salvador's first leftist head of state in the country's history.The essence of Funes’ campaign slogan, “hope is born,” could be felt throughout the country yesterday, with massive voter turnout reported from the metropolis of San Salvador to rural villages in the outlying departments.

In a repeat of interventionist statements by U.S. officials made during El Salvador's 2004 elections, congressional Republicans have once again openly threatened Salvadoran voters from the floor of the House by claiming Washington would have to review its polices on "cash remittances and immigration" should the FMLN win Sunday's election. One congressman even ridiculously referred to the opposition as the "pro-terrorist FMLN party." Please take action.

U.S. taxpayer-funded groups linked to past U.S. interventions in democratic processes throughout the Americas are gearing up for El Salvador's 2009 elections. In the past, these groups have played an active role in obstructing and/or sabotaging left-leaning, democratic political movements. A fact-finding delegation sponsored by the Committee in Solidarity with the People of El Salvador (CISPES) reports back as the local campaign season gets underway.

The Committee in Solidarity with the People of El Salvador (CISPES), illegally targeted in the 1980’s by the largest FBI Internal Security investigation of the Reagan era, has in recent months again received threatening communications from the U.S. Department of Justice. Citing the Foreign Agents Registration Act of 1938, a letter sent to CISPES in January questions the organization’s relationship with the leftist Salvadoran political party known as the Farabundo Marti Front for National Liberation, or FMLN. CISPES received similar inquiries in the 1980s which eventually led to an illegal FBI investigation into its activities.

El Salvador’s Attorney General last Friday requested that charges of “acts of terrorism” be dropped against 13 peaceful protesters arrested at a demonstration against water privatization last July in the town of Suchitoto . After more than six months of investigation into the events of July 2, 2007, the Salvadoran government was unable to substantiate its original terrorism accusations, which carried a potential sentence of up to 60 years in prison.