"Bring Them Home" Undocumented Activism: Week One in Otay 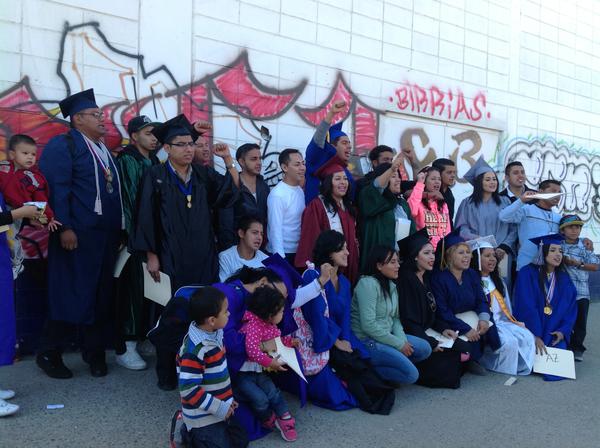 If the key organizers of the National Immigrant Youth Alliance (NIYA) had their way, the controversial group would cease to exist. But until deportations stop and families are reunited, that’s unlikely to happen.

A day after the culmination of months of planning the third media-hyped protest at the U.S.-Mexico border, 21-year-old Dulce Guerrero sat exhausted outside a hotel in San Ysidro in southern California earlier this week. “We’re doing this because we’re undocumented and our families are being deported every day. But if we didn’t have to be here, if I didn’t have to be in San Diego doing this, I wouldn’t,” she said.

Guerrero co-coordinated the latest “Bring Them Home” event at the Otay Mesa Port of Entry that took place Monday, March 10. The protest generated national attention, and on its first day landed 30 asylum seekers in Correctional Centers of America detention facility—which is what NIYA members expected to happen. The demonstration was originally dubbed “Dream 250,” with an initial plan that 250 people would seek asylum or humanitarian parole in order to enter the United States and reunite with family members here. It is also called “Bring Them Home,” like the actions that preceded this one last summer and in Laredo last fall.

In the end, the 250 people who originally planned to cross dwindled to 150, spread over the first week, because, according to NIYA co-founder Mohammad Abdollahi, many of the participants weren’t ready for what might face them in detention. All of the members of the “Bring Them Home” groups are undocumented, and most have been deported. “Knowing that they may be detained causes high stress and emotional trauma,” Abdollahi explained, “and the prospect of being in jail for an extended period of time, and then possibly deported back to Mexico, creates anxiety that many of the potential asylum seekers may not have been ready for when they first joined us.”

This protest and the two before it were designed to test immigration law and to keep immigration reform in the spotlight. Department of Homeland Security data shows that 419,384 people were deported in 2012, with a total of 1.6 million between 2009–2012.

“Immigration reform is dead in congress as of now, and this action is going to revive it—and revive it in a good way, because these families are immigration reform. This is where it should start,” Guerrero says, adding that the demonstration on Monday was necessary to show people what deportation “looks like” from the very faces of the family members who cannot be physically together without leaving United States. “The bottom line for NIYA is to empower undocumented residents.”

NIYA is known for its dissident tactics, drawing criticism from other human rights groups, immigration advocates, and even former allies in Congress. Rep. Luis Gutiérrez (D-IL) released a statement in November officially breaking ties with the group and with DREAMactivist.org, affiliated with NIYA. Douglas Rivlin, spokesman and Director of Communication for Rep. Gutiérrez, wrote that a NIYA activist had secretly taped a private conversation in Gutiérrez’ office, and another had to be escorted out of the office by U.S. Capitol Police after refusing to leave. The incident took place during the Dream 30 Laredo action in October, when NIYA members in Washington, D.C. staged sit-ins and protests to convince authorities to release detainees in El Paso, Texas who had surrendered to authorities at Laredo. The statement accuses NIYA leaders of expressing anti-white “racist” comments on Facebook and Twitter, and demonstrating overt opposition to the current proposal for immigration reform.

Abdollahi admits that NIYA’s tactics raise ire—but also awareness. His focus is on the results, and not the popularity of the group. Abdollahi is an undocumented Iranian who learned of his citizenship status when he was in high school. He got involved with immigration advocacy after he was refused college financial aid and scholarships in Michigan, where he grew up. 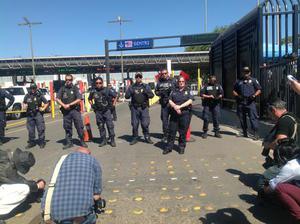 Border Patrol and Media at the Border (Diana Bryson Barnes)

Abdollahi told Skidmore College students last fall, during a speaking engagement in Saratoga Springs, New York, that NIYA’s objective is to “disorganize the organized,” to cause some “chaos” amongst those who can’t see past the status quo, and to meet their objectives: to bring families together, to stop deportation, and to empower undocumented leaders. Like Guerrero, Abdollahi believes that when those objectives are met, NIYA will cease to exist. But in the meantime, the chaos and disorganization stimulate a new paradigm to challenge the unjust immigration law system from its roots.

“To empower, educate, and escalate—that’s our official mission statement,” says Guerrero. Guerrero has DACA (Deferred Action for Childhood Arrivals) status. She has lived in the United States. for 18 years, joining NIYA after her mother was stopped for a traffic violation. Although her mother was not deported, the incident was traumatic enough for Guerrero to dedicate her energy to immigration advocacy, eventually leaving her job at a law firm to head up the “Bring Them Home Otay” action last Monday.

Guerrero says that NIYA uses dissident tactics that are unpopular at times. “When we see families together, we know our goal is met. Whatever we have to take in the meantime, whether it is criticism or people talking down to us, we’re willing to deal with that because we know what the outcome is going to be.” They look to the Student Nonviolent Coordinating Committee (SNCC) for inspiration.

SNCC was active in the early 1960s, organizing student sit-ins as a front-line tactic of the civil rights movement in the south. “They were a tactical youth group also, down to do work that wasn’t recognized at the time,” says Guerrero.

Although NIYA’s acts of civil disobedience draw media attention, Guerrero believes that its work and its existence is under-recognized. NIYA is a small, volunteer-run organization with members in 20 different states. This small, noisy group has managed to take on ICE, the border wall, and Congress, to reveal what they consider injustices inside detention centers—by infiltrating them and taking case studies. They operate on a shoestring budget and depend heavily upon one another’s loyalty and focus.

“You’re never in a stable environment. You’re emotionally drained and you’re trying to take care of yourself, trying to make decisions about what is best for everyone,” says Guerrero. She is sitting in the front seat of a car that is parked but running. Abdollahi is in the driver’s seat. Outside the car a group of family members wait for news about their children, wives, husbands, siblings who were detained at the beginning of this week’s action.

Javier Gallegos, 9, was part of that group that sought asylum Monday. Javier was born in the United States, so he will not ask for asylum, but he will ask to be kept with his father. He knows that separation is a real possibility. The young Gallegos got in line in Tijuana on Monday morning, while the group chanted and marched through the street toward the border. Gallegos’ father Plácido was with him. The elder Plácido is a small, quiet man. With one hand he held onto his son. With the other he raised his fist, at first tentatively, then gained momentum and yelled: “¡Sin papeles, sin miedo!” (Undocumented, unafraid!) 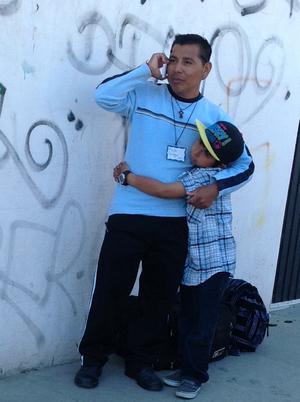 Together they marched to the border with the other asylum-seekers. Waiting for them on the other side were Javier’s two older sisters and his mother, who made it across through the “Bring Them Home Laredo” action. If the family’s desires are met, they will be together again for the first time in a year. Three years ago they had decided to return to Mexico after the passing of Arizona’s harsh immigration laws that facilitate the export of up to 70 people daily into Mexico. Mexico proved to be difficult for the Gallegos family, with escalating drug cartel violence, extortion, and unemployment. They decided to return to the United States, and to attempt an illegal crossing.

“It was so bad. We were all dirty. We had nothing to drink. Nothing to eat.” Jessica Gallegos, 17, is Javier’s older sister. She recalls the harrowing trek through the desert that left them first in the hands of Mexican soldiers, and then the U.S. Border Patrol. Eventually they landed in detention and were deported. Since her mother Viki is Honduran, she was returned to Honduras and the rest of the family was deported back to Mexico.

Eventually, the Gallegos family reunited in northwestern Mexico and joined the “Bring Them Home Laredo” group, crossing again to the U.S., where they were later released. Their father, however, remained in Mexico. When Plácido Gallegos learned about the third NIYA action in Tijuana, he made his way there to join the group and ask for asylum or humanitarian parole so that he could return to his family in Arizona, where they had lived for about ten years.

For now, Guerrero and other NIYA immigrant advocates continue their work, focusing on the end result. She says: “What we want to do is to create a different style of organizing—where we can actually see the change we make as we organize.”

Correction: An earlier version of this article stated that The Dream 250 dwindled to 30 participants, but it in fact remains at 150 participants. The article has been amended to reflect this correction.