Venezuelan Barrio Organization Calls for Peace to Deepen the Revolution

With few exceptions, most international media coverage of the recent protests in Venezuela gives little sense of the response from the popular social movement actors who support the Maduro government but operate independently from it. 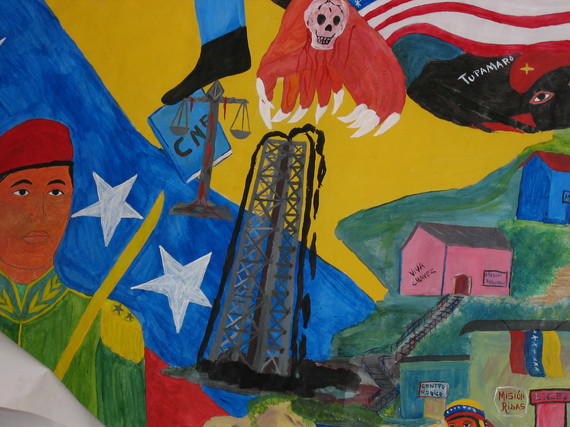 Mural in the barrio of La Vega, Caracas (Sujatha Fernandes)

This article originally appeared on the Huffington Post, March 2, 2013.
With few exceptions, most international media coverage of the recent protests in Venezuela gives little sense of the response from the popular social movement actors who support the Maduro government but operate independently from it. As researchers who have carried out long-term fieldwork in the urban barrios of Caracas, we felt compelled to translate and publish the statement of one of these barrio organizations.
This piece is written by a group called Cayapo, a long-time social movement organization with members in rural and urban areas across Venezuela. The piece locates the current antagonism as deeply rooted in a historic fear of the masses dating back to colonization, which eventually turns to hatred and is then easily sparked into violence. There is a danger that this violence can eventually be used in self-destructive ways by the masses themselves.
In this statement, Cayapo call on Maduro supporters to resist the urge to respond to the provocations of some sectors of the opposition with more violence. They hope that through conversation and collective creative expression they can expose a truth—that this war seeks for nefarious aims to divide the people who should otherwise stand united.
Sujatha Fernandes
Naomi Schiller
Alejandro Velasco
Work Together to Dilute Hate
By Cayapo
To see original statement in Spanish, click here.
We are clear that this war is like all wars; its aim is power, a gospel truth. We face a type of war where trenches are diffuse, whose main front is the collective mind.
Multinationals have won over the mind of the middle class in Venezuela, fomenting a deeply rooted fear, burdened by the weight of history, savagely exploited and conveniently used, turned into irrational hatred, impossible to cure.
Only the passage of time can disarm the hate that makes any act of war a possible trigger for those seeking change, and which will lead these sick masses, demented, to self destruct in a maelstrom that sates their manufactured hatred.
To preserve life, we must isolate those who try to generate and propagate more hate.
In this light we propose to gather together and unite everyone working with art, words, and music to generate designs that aid in the goal of diluting hate. Everyone organized in various unions, all producers, all the people.
The State or Revolutionary Directorate has acted with propriety, unraveling every difficult situation (as in the exemplary case of negotiating Leopoldo López’s surrender and cordoning the demonstration with policewomen) that—stoked by agitators and trained provocateurs who were paid for and organized by the real stakeholders—could easily have boiled over and provoked the final objective: total war, Venezuela dead and prostrate.
But this war, by its very novel features, involves not just armies and their supporters, or the state apparatus; instead its goal is the death of three-quarters of the planet, by those who see people as living commodities, who euphemistically call them “collateral damage.” This comfortable war by the world’s owners now seeks the elimination of the bourgeois state* in all of its varieties because it no longer serves its plans for maximum dictatorial control.
It is incumbent upon the people to dilute the hatred, to prevent elites from building their armies with us. To do so it is vital to stay united as a people, the key condition to avoid the breakout of civil war, fratricidal war, remote war (proxy war, as they call it at the Pentagon): death without distinction is its primary purpose. The war of boardrooms and suits.
It is true that we can scorch the east** in a day of rage, but how long will we endure its consequences? El Comandante [Hugo Chávez] taught us to dodge the hate even when it seemed most impossible. To call yourself Chavista and fail to apply its most important lessons is a contradiction: and we are not talking about turning the other cheek, but knowing how to fight.
We must deepen the work of organizing, of propaganda and popular intelligence (yes, that intelligence and the other one too) fundamentally in the heart of the barrios, countryside, and villages, explaining the situation, organizing conversations based on a broad, real, and complete understanding, of this (new) situation (the “new” might not be that obvious), informing the population with accurate information.
In the morass, the truth will sustain us as revolutionaries. And truth is accomplished together, as ourselves.
Those who can access social media should do so, understanding that it is not the main way to dilute hate. It must be done very carefully to avoid falling prey to that which we wish to temper.
Always remember that as people we are more prone to wars of confrontation than to diluting the conditions that produce it. The heroes in this war will not be those who fire the most shots, but those who most defuse the catalysts for war.
* The authors believe that the current global configuration of elite classes seeks to destroy even the meagre protections of the bourgeois state, as it is no longer sufficient for them to extend their economic profits and political power.
** They refer here to the east of Caracas, an area occupied by mostly middle and upper class residents (with the exception of Petaré), as compared to the predominantly poor, working class west side of the city.
Tags:
Barrio Movements
Nicolas Maduro
peace
Venezuela
Violence
Tweet