Fighting for Independent Unions in the Maquilas

Most of the unions that exist in Mexico’s maquila sector—the duty-free assembly plants that import raw materials and intermediate goods, and then export final products for consumption elsewhere—exist only on paper.

If you like this feature on maquila organizing, read the rest of NACLA's Spring Issue here for our report on Mexico and our updates from the region!

Most of the unions that exist in Mexico’s maquila sector—the duty-free assembly plants that import raw materials and intermediate goods, and then export final products for consumption elsewhere—exist only on paper. Mexico’s maquilas (or maquiladoras) currently employ about 1.3 million workers, few of whom realize they may be, in formal terms, unionized. 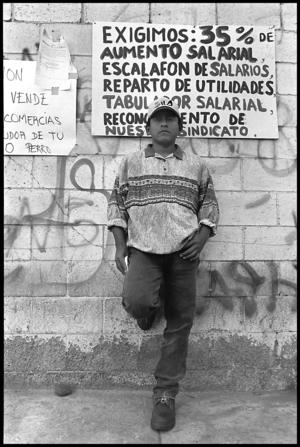 A striker with a list of strike demands. Photo by David Bacon.

These “paper unions,” which we can also call subordinate unions, have received recognition by the official labor boards, but have been created without the participation, and frequently without the knowledge, of the workers themselves. They have been created to protect the maquiladoras against workers’ demands for genuine, independent unions. The subordinate union, although the legal representative of the workers, Frequently violates workers’ rights, as the union protects corporate interests by selling control over the workers and their collective contract to the employer.

Matamoros, a small city in the northeast corner of Mexico, bordering Brownsville, Texas to the north and the Gulf of Mexico to the east, has been home to the prototype of traditional unionism. The Union of Laborers, Industrial and Maquiladora Industry Workers (SJOIIM), based on traditional unionism, has achieved significantly better wages and benefits through collective bargaining than maquila workers have received in Tijuana or Ciudad Juárez in the absence of genuine worker advocacy. In 1990, because the SJOIIM would not act like a flexible union, the government-affiliated Confederation of Mexican Workers (CTM) formed the Industrial Union of Workers in Maquiladora and Assembling Plants in Matamoros and its Municipality (SITPME). By 2013, the SITPME had 12,000 members, almost 20% of all workers in Matamoros.

The Schumex maquiladora was opened in Matamoros in 1998 and had 1,000 employees as of December 2013. It manufactures power-generation equipment and electrical appliances and accessories. Schumex signed a contract with the flexible SITPME when it first arrived. The conflict at Schumex began in December 2012 when workers protested the company’s unilateral decision to not pay the customary Chistmas bonuses as provided for in the collective agreement. The company attempted to end the protest by forming groups of workers to spread the word that the demand of the protesters was not appropriate. At the same time, a group of workers organized within the company to invite other workers to join the protest, carrying out work stoppages and other protest actions.

At first, the company, concerned that the protests would affect production, tried to solve the problem itself. But the protests continued both inside and outside the plant from February to December 2013 and the company began to fire workers involved in the protests, with no objections from the union. The firings were intensified in April 2013 when the conflict became public.

The union’s failure to defend dismissed workers was sharply criticized, and workers began seeking alternatives to SITPME. A first step was to approach the Regional Federation of Workers of Matamoros (FRTM), led by Juan Villafuerte, a leader of SJOIIM. Villafuerte assigned a lawyer to work with the dissident workers. It was clear that SJOIIM was instrumental in the movement, as workers knew that this union had achieved better wages than did SITPME and was willing to fight for their demands.

The fired workers submitted a demand to separate from SITPME to the Local Conciliation and Arbitration Board. However, the Board declared that it was not within its competence and told the workers to submit their demand to the State Board of Conciliation and Arbitration. Before the ruling was issued, the company allowed the SITPME to enter the plant to convince workers to abandon their protest, thereby reaffirming the company’s alliance with the flexible union. The company also openly expressed its support for this union, arguing that the problem was between the workers and the union, not the workers and the company. In essence, the company appropriated the right of workers to have a union of their choice.

Social media played an important role in the links between workers inside and outside the plant. It was through two Facebook accounts that information on the movement, as well as threats being received, were shared in an attempt to raise awareness among workers to encourage them to continue the struggle.

The case before the State Board did not go forward because the pressure from SITPME, allied with the company, got the majority of employees to “voluntarily” sign their support of the existing union; the dissident workers challenged the falsification of signatures and obtained a court order allowing them to withdraw their affiliation with the SITMPE. The company, however, did not comply with the order; on the contrary, its intimidation against workers sympathetic to the movement sharpened. The company and the union sought out workers who had supported the movement to get them to sign a document, and if they refused, they were fired.

The second movement is located in Ciudad Acuña, a border city adjacent to Del Rio, Texas. The plant in question is a branch of Grupo PKC, a Finnish corporation that produces chassis for cars. The company had previously belonged to ALCOA, which had acquired it from a company called Arneses y Accesorios through a joint venture in the early 1990s, becoming sole owner in 2004. ALCOA sold the plant in 2009 to a U.S. firm called Platinum Equity, which in turn sold it to PKC in 2011.

PKC and its predecessors have restructured at various times in order to continue operating in the international market. The continual changes in ownership have affected labor rights and prolonged the resolution of core issues such as the recognition of an independent union. Companies fall back on these constant changes in ownership to eliminate labor rights and preserve the domination of subordinate unions, despite international solidarity with workers. And, of course, all of these international influences operate within the framework of the government-union-business structure that prevents the triumph of local labor movements.

There was no union at Arneses y Accesorios when they initiated their activities in the 1990s. However, workers began to receive support from the Workers’ Border Committee (CFO), a non-governmental organization in the border town of Piedras Negras, in their attempts to improve wages and benefits. The CFO, at first, was not interested in supporting the formation of a union, so it only took on an advisory role and promoted the formation of “dialogue committees” to solve labor problems. These committees achieved ​​significant changes, especially in regard to wages and employment benefits.

Despite these changes, and perhaps influenced by some U.S. unions such as the United Steelworkers, they came to the viewpoint that workers could not make more improvements if they did not have a legally recognized union. CFO used its contact with the National Mine Workers Union to organize meetings with workers, who finally decided that the miners union was best suited to represent their interests. After a period of working to raise support, 2,500 of the 7,000 workers at ALCOA in Ciudad Acuña decided to unionize and become Section 30 of the Mine Workers Union. However, this union was more symbolic than legal because there was no official recognition. 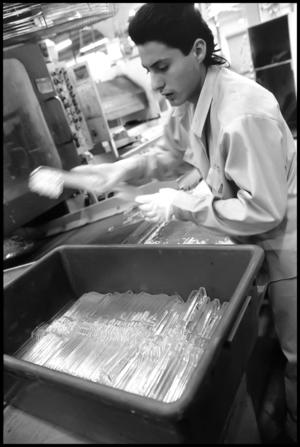 In 2009, the plant was sold to Platinum Equity. The sale was a setback for workers because Platinum refused to recognize the agreements that had been previously reached. The new owners used this period to clean up the “labor problem” and to deal with economic issues. It rejected the dialogue committees and then signed a collective agreement with the CTM Coahuila. Once this protection contract was in place, it sold the company to PKC.

The miners’ union continued to support the workers who also received international solidarity from U.S. unions like the United Auto Workers and the United Steelworkers. In August 2011, when the plant was sold to PKC, the miners’ union asked to be recognized as the representative of the workers, but, in spite of international support, PKC refused to recognize the miners’ union claiming that they already had a collective contract with the “Miguel Trujillo Lopez” union belonging to the CTM of Coahuila. The news raised eyebrows because the workers did not know they had a union, had never seen a copy of a collective agreement, had never participated in union elections, and had never had union dues deducted from their paychecks.

The workers did not accept the paper union and continued to fight for the recognition of the miners’ union, demanding that the miners receive the title to the collective agreement. However, the company successfully argued before the labor boards that membership in the CTM was “to protect workers from the influence of violent unions” and that they, as a company, had the right to choose the union they desired.

International pressure forced PKC to accept a vote to choose the union that would represent the workers. The vote was won by the state CTM by virtue of the alliance between the CTM union and the company. The company opened its doors to CTM functionaries so that they could “convince” workers to affiliate with them. As well, the company began a campaign of harassment against supporters of the miners’ union, and even told workers that the company would leave if the miners’ union won.

The future for workers at PKC is uncertain. Even though the company has agreed to a new vote for union representation, the possibility of a victory by the miners’ union is remote for several reasons: first of all because of the unconditional support that PKC gives to the CTM; second because the labor authorities and the CTM argue that the Mineworkers have no right to organize them because they belong to the automotive industry and not mining; and most important, because of the power of the government-labor machinery that exists in this region to prevent recognition of a genuine organization for workers

The movements at Schumex and PKC are challenging flexible unions—unions that are characterized by extensive collaboration with the company and a weak link with workers. They are also challenging subordinate unions—unions created to protect the maquila companies—both of which involve open violations of the workers’ right to free association. The Schumex case shows workers with a strong tradition of local unionism that use both workplace and legal strategies and that now have incorporated the use of new technologies in their resistance. The ongoing debate is between confidence in the traditional unionism and the formation of new trade union bodies outside the corporatist structure.

PKC, on the other hand, represents workers’ resistance in which the support of NGOs and international unions play an important role. It is difficult to know whether the workers are simply following the suggestions of NGOs and other support organizations and how much their actions are of their own design. The international support has strengthened the protest movements but it has also been a weakness, as the subordinate unions have used nationalist discourse to attack them locally.

In any case, both movements indicate that union-management collaboration, more than anything else, continues to be the main obstacle to form genuine unions in Mexico’s maquiladoras.

Cirila Quintero is the author of two books on unions and maquilas in northern Mexico, including Reestructuración sindical en la frontera norte: El caso de la industria maquiladora (1997), and co-editor of two other books on maquilas and workers. She is a faculty researcher at El Colegio de la Frontera Norte, regional office in Matamoros, Tamaulipas, Mexico.