Police violently evicted a community resistance group in San José del Golfo, Guatemala. For two years the group peacefully protested the use of a local mine in La Puya by a U.S.-based mining firm.

Land is a historically contentious issue in Guatemala. In a country where 2% of the population owns 70% of the arable land, campesinos and their communities must push back against those who would threaten their livelihoods. This is especially true for the community of San José del Golfo. For two years, community activists maintained a 24-hour presence along the remote road that leads to the mine in La Puya, successfully blocking mining machinery. 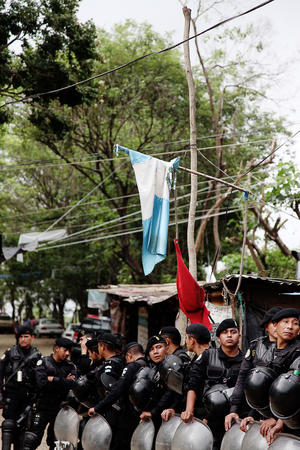 But this all changed the morning of May 23, 2014, when the mining firm, Kappes, Cassiday, & Associates (KCA), supported by hundreds of elite Guatemalan police officers (PNC), arrived to forcibly remove the La Puya resistance. Police then stood guard as contractors for KCA transported machinery to the site of the mine.

The Guatemalan government granted permits for the El Tambor mine to KCA, a mining firm based in Reno, Nevada, over a decade ago. Yet the communities near the mine were never informed about the construction. According to Kelsey Alford-Jones of the Guatemalan Human Rights Commission, it wasn’t until 2010 that the community learned about the sale and construction of a mine that would affect all of their lives.

La Puya is a symbolic example of what is occurring elsewhere in Guatemala and throughout Latin America. Community members claim there was no advanced warning about the sale of the land to KCA, despite the government’s legal obligation to do so. Further, there was no consultation with the community, and to make matters worse, it appears that the environmental impact assessment was fraudulent. An outside independent assessment found that the original had not investigated the impacts of the mine on social, cultural, and environmental factors.

KCA pressured the government to open the mine, threatening to file lawsuits if it remained closed. This increased pressure led to the confrontation on the 23rd. But despite their eviction, community members stated that they will continue protesting the mine.

Throughout the past two years, the resistance at La Puya remained dedicated to non-violent protest tactics. The morning of their eviction was no different. The community activists responded by sitting in the road when police arrived alongside the machinery. But police used tear gas on protesters and beat them with batons, successfully dislodged the resistance.

La Puya’s commitment to peaceful resistance represents a “unique situation,” said Alford-Jones of the Guatemalan Human Rights Commission. “Their dedication to non-violence is unmatched in Guatemala.”

One incident on December 7, 2012, demonstrates how far the members of La Puya will take their principle of non-violence. On that day, hundreds of riot police accompanied contractors who were transporting equipment to the mine. Activists responded by lying down in front of the entrance to the mine, putting their bodies on the line to prevent the equipment from arriving. The police responded by deploying tear gas and rubber bullets. Despite the suffocating clouds of gas, the activists stood their ground. At the end of the confrontation, the police and contractors turned around.

However, not all standoffs have ended so peacefully. In June 2012 Yolanda Oquelí, one of the principle leaders of the La Puya resistance, was shot in the back by an unknown shooter. She survived, but there is still no investigation into the shooting.

Activists throughout Guatemala risk a lot to maintain their resistance. The heavy-handed response of the Guatemalan government marks a criminalization of protest in Guatemala.

“The government has brought back the idea of the internal enemy,” said Alford-Jones. “This idea is what justified torture and genocide during the internal armed conflict.”

Government officials have gone on television and equated the leaders of the resistance movements as criminals and terrorists.

Communities have also seen their territories militarized and subjugated to periods of marshal law, during which community leaders are detained by soldiers and illegally held. In Huehuetenago, a northwestern department of Guatemala, during a period of marshal law in 2013, 11 community leaders were arrested and detained. Charges were never brought against them.

Another tactic being utilized in the criminalization of protests is through the courts. Leaders face unfounded charges of kidnapping, terrorism, or assault.

“It seems to be a strategy to exhaust or put in prison the leaders of these movements,” says Alford-Jones.

Activists at La Puya have increasingly run into this tactic. On May 3, 2014 members of the resistance were found guilty and sentenced to nine years in prison and fined $4,212 for their part in making threats and assaulting employees of the El Tambor mine.

Supporters and observers of the conflict have pointed out that the charges they are being accused of are “baseless.” Still, at least eight other leaders including Yolanda Oqueíl face similar charges.

The struggle at La Puya is one of a number of community resistance movements in Guatemala and other parts of Latin America, where campesinos and communities are threated by the expansion of development projects.

Whether it is for the development of eco-friendly tourism, the expansion of industrial agriculture, or projects based on the extractive model, communities have been pitched in a zero-sum battle against the sale and destruction of their lands.

Jeff Abbott is an independent journalist and photographer currently based out of Seattle Washington. He has lived in Haiti and Guatemala, and has covered social movements in Mexico and Guatemala.