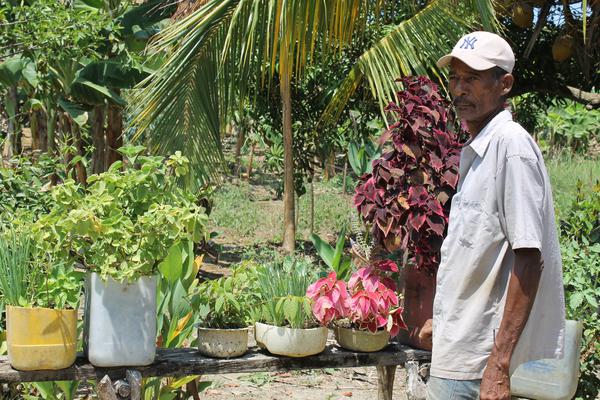 A member of ASPROCIG keeps raised crops in his backyard, which was heavily flooded in 2010 (Alejandro Camargo)

The latest report of the Intergovernmental Panel on Climate Change (IPCC) reaffirmed the gloomy future for rural areas and global food production under accelerating climate change. Yield declines, prices instability, agriculture and livestock losses, and severe droughts and floods are among the myriad problems that rural producers will experience more intensively as climate change heightens.

However, the agrarian crisis associated with the effects of climate change cannot be seen as a self-contained problem whose roots lie somewhere at the global level. Many rural men and women in the Global South experience the environmental stress of climate change as a new challenge connected with longstanding local agrarian struggles against injustice, inequality, and exclusion. The effects of global climate change in the countryside, therefore, are to be understood in connection with multi-scalar political and economic processes that also impinge upon the vulnerability of rural families and their means of survival.

The place of Latin America and the Caribbean (LAC) in the development of this looming global food crisis can be alarming, as small farmers produce nearly 70% of the food we consume in the region.

OXFAM estimates that LAC is one of the world’s most vulnerable regions to climate change, which makes its agricultural sector particularly prone to the devastating impacts of climate-related extreme events. In Colombia—where floods and droughts are a growing threat—the intimate articulation of global climate change and local agrarian struggles is becoming rather evident.

Antonio is a 71-year-old campesino living in the lower Sinú River basin in northern Colombia. As is the case with many other campesinos in this area, Antonio actively participated in unprecedented peasant struggles over access to land in the 1970s. Since the 1950s, numerous landless campesino uprisings sparked throughout Latin America as a response to decades of land concentration and marginality. Landless peasants demanded an agrarian reform that ensured a more equitable distribution of land.

In the Sinú River area, these struggles involved direct—and often highly violent—confrontation with powerful landowners, whose cattle latifundios expanded at the expense of communal lands, forests, and wetlands. Thus, violent conflicts and the deterioration of these resources that sustained rural livelihoods exacerbated the marginal condition of many families.

In 1993, Antonio and other campesinos created what is known today as the Association of Producers for the Community Development of the Cienaga Grande del Bajo Sinú, ASPROCIG, in order to unify small organizations and fight for land collectively (see video below). Even though access to land was at the center of this new organization, ASPROCIG faced a new threat: the construction of a dam in the highlands of the Sinú River.

Since the 1950s, the Colombian state envisioned the construction of a dam in the Sinú River to control floods and generate hydropower. It wasn’t until the 1990s when the dam was finally built thanks to a joint investment of state and private capital.

By transforming the hydrological dynamics of the Sinú River, however, this dam produced a socio-ecological catastrophe causing a severe impact on many of the indigenous and campesino families along the river. River bank erosion, fish depletion, and loss of soil nutrients are but a few of the many ecological problems that rural families have been facing since the inception of the dam.

Yet there is paradoxical problem that complicates the situation of rural families in this area. Antonio eloquently explained this problem:

“The dam was supposedly conceived of as a mechanism to control floods and make agriculture a less vulnerable activity to flood-induced disasters. But what we are experiencing now is that floods are becoming more catastrophic and unexpected. Before the dam, floods occurred seasonally and we knew when water was coming, and we adapted accordingly. After the dam, floods can occur unexpectedly and the dam has proved to be ineffective at withholding water when the rainy season arrives. Things are worse now.”

Even though scientists argued that this catastrophe was an effect of global climate change, many campesinos, victims of this catastrophe, find that explanation unsatisfactory. Francisco, another member of ASPROCIG, put it this way:

“We know climate change is making floods and droughts more catastrophic. But we also know that the effects of climate change are more intense because we don’t have forests or wetlands to buffer the impacts of these changes. Also, due to the relentless concentration of land and the violence surrounding it, poor peasants are forced to live in risky areas that are prone to flooding.”

Although the protests inaugurated in the 1950s made land more attainable to campesinos, the problem of access to rural land in Colombia is still troubling.

On the one hand, decades of political violence have resulted in the dispossession of thousands of rural families from their land. Since the 1960s, with the creation of leftist guerrillas, Colombia has suffered the harshness of an armed conflict that intensified in the 1990s, when paramilitary forces were massively organized to thwart guerrillas. The confrontation among guerrillas, paramilitaries, and the army has mainly occurred in the countryside, thus rendering campesino families the main victims of this conflict.

On the other hand, foreign land investments—mainly for agribusiness, mining, and forestry—currently control about 40% of the national territory. These two elements are crucial to understanding why land access and distribution in Colombia is today among the most unequal in the world.

In August 2013, this economic crisis led to unprecedented national agrarian strikes and protests against agricultural policies and the unfair conditions of international free trade agreements. Therefore, the catastrophic effects of La Niña phenomenon in 2010 on the countryside, along with subsequent extreme droughts, added to a historical agrarian crisis that has spurred different forms of campesino mobilization.

In response to this multidimensional crisis, ASPROCIG’s struggle against land concentration has now broadened its purview to encompass problems such as wetland and forest deterioration, food insecurity, and climate change.

Furthermore, as the violence inherent to the history of land struggles in the Sinú River has engendered more conflicts, ASPROCIG’s members has shifted from violent scenarios to the spaces of agro-ecology as a form of resistance. Antonio, Francisco, and more than 1,200 ASPROCIG families created raised agro-ecological systems and water harvesting infrastructures in their households to tackle extreme weather.

At the communal level, ASPROCIG members have developed a local mechanism of food exchange and commercialization, reforestation projects, and a system of solar-powered local aqueducts. They identify these resilient strategies not only as a way to adapt to climate change, but also as a response to years of struggles against landowners and the dam.

But despite the positive impact of these projects on the quality of life of rural families, the lack of resources and the meager support from the state constrains the possibility of replicating this experience beyond the lower Sinú River basin. Regrettably, many other rural families across the country are still striving to get by in areas wracked by floods, droughts, and uneven agrarian development.

After the 2010 floods, the Colombian state created a national strategy of adaptation to climate change. This strategy is still at its early stage, and has hitherto focused on the recovery of public infrastructures, social housing, and the allocation of agricultural assets.

However, structural problems in vulnerable areas such as the concentration of land, rural violence, and the environmental effects of large-scale projects are still seen as unconnected from the challenges of adaptation to global climate change. Infrastructural works are crucial to prevent future climate-related calamities, but in a country like Colombia the question of adaptation to global climate change in rural areas needs to be a question of food sovereignty, land rights, and environmental justice as well.

In this way, a better understanding of the myriad factors that dramatically shape the local experience of global climate change—as opposed to an exclusive focus on its effects—can provide the foundations for a more transformative perspective in adaptation and resilience policies.

For more information on ASPROCIG, contact asprocig@asprocig.org or follow on Twitter at @asprocig. Alejandro Camargo is a Ph.D. candidate in geography at Syracuse University, and an external researcher at the Colombian Institute of Anthropology and History. Email him at alejandro.camargo@gmail.com or follow at @camargh2o.