Migrants fled a shelter in Nogales, Mexico, after it was raided and robbed by police—revealing the corruption and impunity that plagues this border town. 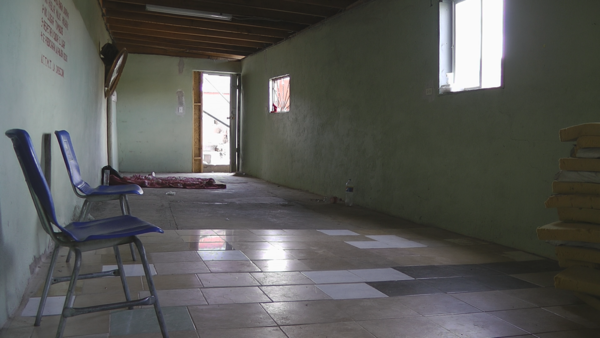 The family that managed a migrant shelter in Nogales fled the border town fearing for their lives after uniformed police officers robbed the shelter at gunpoint on the night of July 9.

The closure of the 30-bed shelter, El Albergue Cristiano La Roca, located in the Mexican state of Sonora, leaves more migrants looking for safe haven on the streets at night. According to Rev. Sean Carroll, S.J., many will likely end up at the cemetery to sleep. He said they feel safer there in the company of other migrants—who are easy targets for human smugglers and drug traffickers.

“Migrants are very vulnerable especially along the migratory routes, many are victims of organized crime, whether it’s on the top of the train or on the ground, by extortion, abuse, violence, rape,” Carroll said. “Clearly, reform needs to take place in Mexico, of its law enforcement and its legal structure.”

Carroll is executive director of the Jesuit-backed Kino Border Initiative (KBI), a five-year-old bi-national organization that aids the burgeoning migrant population converging on Nogales. The Mexican Missionary Sisters of the Eucharist work with the KBI to run a women’s shelter and soup kitchen in Sonora. Carroll said it is difficult to estimate Nogales’ transient population, but he notes that the KBI soup kitchen served 46,000 meals to migrants in 2013. He said El Albergue Cristiano La Roca was known to take in Central American migrants, who are particularly vulnerable because they cannot work in Mexico, facing discrimination and deportation.

Following the assault on La Roca, KBI issued a statement to the local press identifying state and local police as the perpetrators. KBI sent a petition to Mexican authorities, including politicians and human rights advocates, denouncing the crime, and demanding protection for the victims.

According to KBI’s account, 18 Central Americans and two Mexicans at the shelter were asleep at 11 p.m. They were lying on thin, worn pads on a concrete floor when the door was forced open and 19 masked men and one unmasked woman barged in. The victims corroborated each other’s stories that the assailants had arrived and later left in official police vehicles.

The shelter residents were held at gunpoint for more than an hour and a half, stripped of their pants and robbed of their belongings. When the assailants finally left, some victims called the local police to report the crime. Shortly thereafter, the same police officers returned, taking photos of each victim with a threat to kill them if they pursued their complaint.

Nogales mayor Ramón Guzmán Muñoz denied involvement by the local police. “There was no proof, no basis to connect the Municipal Police with this crime. The local police were in no way involved with this,” he said. The Nogales mayor blamed the raid on state police who constantly patrol Nogales streets. Guzmán Muñoz called the raid “an unjustified attack against vulnerable, undocumented migrants, aggressively violating their rights.”

According to the mayor an investigation into the assault is ongoing. At the time that this article was written, no arrests had been made or charges filed in relation to the assault on La Roca migrants.

Police corruption is rampant in Mexico, said human rights advocate and scholar Gustavo de la Rosa Hickerson, who has lived and worked in the border city Ciudad Juárez all of his life. De la Rosa Hickerson, a Professor-Investigator of Human Rights at the Universidad Autónoma de Ciudad Juárez, describes police brutality and impunity as “an endemic disease” on the border with the United States. He said Mexican police corruption was a principal cause of the drug wars that left 11,500 Juárez citizens dead between 2008 and 2013.

“It is very difficult to eradicate police corruption because the culture of the average citizen and their notion of success in Mexico depends heavily upon the capacity of the powerful to act outside of the law with complete impunity,” said De la Rosa Hickerson, who was forced to flee Mexico in 2009 for several months after his life was threatened because of his work as a human rights lawyer.

“Children learn very young that it is not good business to study a profession if those who dedicate themselves to illicit activities are more successful in life than those who are subjected to the state of law,” De la Rosa Hickerson said.

Marla Conrad, a social worker and migrant advocate for KBI, is concerned that the investigation into the La Roca raid will come to a halt because the victims have fled Nogales so there are no witnesses to left to testify against the police.

Conrad says the loss of the shelter is a loss for the migrant population in Nogales. “La Roca has always been flexible with the needs of the Central Americans, and although they didn't have the resources to provide them with a lot, at the very least the people had a place to sleep,” she said.