On September 19, a dispute between armed cement factory workers and local indigenous Mayan community members left 11 killed and 20 wounded. Once completed, the cement factory is planned to be one of the largest in Latin America. 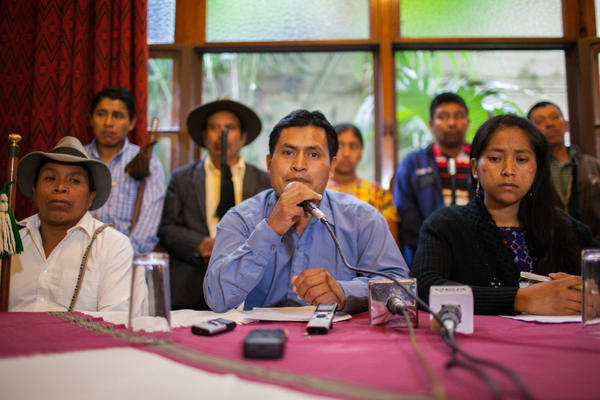 The tranquility of the night in the community of Pajoques, San Juan Sacatepéquez, Guatemala, was broken in a violent escalation of the conflict between the Guatemala state’s business interests, and an indigenous Mayan community, that by the next morning left 11 dead and 20 wounded.

The violence began late in the evening on September 19, when community members reported the presence of 10 armed men that they identified as being from the San Gabriel cement factory. “It was around 9:30 pm when armed men arrived in Pajoques,” Ramona Chocón, a leader from the 12 communities in resistance, said in a phone interview from the offices of the Association of Mayan Lawyers. “When the community leaders approached them, they opened fire.”

Immediately one man was killed, and two others wounded.

The violence escalated when community members armed with machetes tried to block the workers’ exit from town. In the confrontation, several cars and a house were damaged. Eight more people were killed, and several others injured.

“The police did not want to accompany and assist the community in arresting the workers from the cement factory responsible for the murder of our neighbors,” Chocón said. “They never came.”

The current escalation of violence near the San Juan Sacatepéquez project came after community-owned land had been expropriated for the construction of an access road to the cement plant. Community members who were associated with the construction of the cement factory sold their land to the road project, adding to the tension within the communities.

Pajoques is one of 12 indigenous Kaqchikel communities that organized to challenge the construction of San Gabriel cement factory, currently under construction by the company Cementos Progreso, in their territory in the municipality of San Juan Sacatepéquez.

In their most recent statement to the press about the massacre, the leadership of the 12 communities in resistance said that they hold responsible President Otto Pérez Molina, the head of the National Civilian Police Telemaco Pérez, and the Novela family, owners of Cementos Progreso, for the violence and assault on their human rights.

“President Otto Pérez Molina has not heard or responded to the demands of the communities that have been raised on several occasions in regards to the mega-project that was installed without consultation,” the statement said.

The statement also stated that the powerful Novela family is liable for the “use of violence in the construction of this mega-project that threatens mother earth, and the rights of the community.”

According to a report from the Guatemalan Independent Media Center, published days after the violent attack on Pajoques, the Novela family and Cementos Progreso hold contracts for millions of dollars worth of development projects arranged by President Otto Pérez Molina and his Patriot Party. Cementos Progreso also made large contributions to the candidacy of Pérez Molina in the 2011 presidential election.

Guatemala’s Prensa Libre reports that the construction of the San Gabriel plant is estimated to cost as much as $720 million, and is set to be completed in 2016. Once completed, the cement factory will be one of the largest in Latin America, producing nearly 2.3 million tons of cement per year, which will be used internally in Guatemala.

The San Juan project includes the construction of the cement factory, a query, and a nine-mile highway that will connect the facility to the Inter-American Highway. The Guatemalan firm Productos Mineros Limited, a subsidiary of the Novela-owned Cementos Progreso, holds 80% of the shares of the project, with the remaining 20% owned by the Swiss multinational cement company Holcim—a company that purports to pride itself on social responsibility and respect for human rights.

Holcim declined to comment on the recent incident in San Juan Sacatepéquez for this report.

The construction of the San Gabriel cement factory comes at a time when the number of mega projects associated with Plan Mesoamerica—the rebranded Plan Puebla-Panama (PPP)—and other extractive projects have been expanding in Guatemala. In an interview with the online web-magazine Contra Poder, Cementos Progreso’s Vice President of Planning and Financing, José Raúl González, confirmed that the cement is being produced to meet Guatemala’s increasing construction needs, telling the reporter “the plan is to supply the local market.”

Yet as extractive and development projects have expanded, so too has the social conflict around these projects. Communities claim that of the 124 permits for exploration or exploitation of resources, no community has been consulted on the construction.

Across Guatemala, communities have challenged the construction of mega-projects such as San Gabriel by pointing to the International Labour Organization’s Convention 169 on the rights of indigenous peoples to consultation by actors prior to the beginning of development projects in their territory, of which Guatemala is a signatory. They charge that their rights have been violated, and call on businesses like Cementos Progreso and the government to respect the right to consultation.

For a country that has historically seen severe conflict over access to land, the absence of community voices in the use of community land is troubling. The failure of the Guatemalan state and business to include the voice of indigenous communities in the construction of projects within indigenous communities has ensured that social conflict will follow and intensify.

The community leaders of San Juan Sacatepéquez have faced arrest warrants and violent attacks by factory workers long before this most recent attack. In one incident, men from the cement factory threatened to kill community members at a community meeting. In yet another incident, supporters of the cement company assaulted a fact-finding mission led by Daniel Pascual of the Campesino Unity Committee (CUC) and international observers.

Despite the overwhelming intimidation, the communities have maintained their demand for dialogue, and an end to the repression.

The Guatemalan government has responded to the violent attack by issuing decree 06-2014, declaring a state of emergency in the 12 communities near San Juan Sacatepéquez, suspending civil liberties in the communities for 15 days.

In a press conference, Interior Minister Mauricio López Bonilla said that state of emergency was “for the purpose of stabilizing the area.” He also announced the deployment of 600 national police to the area.

The government announced the morning of September 22 the issuing of warrants for the arrest of 40 members of the communities of San Juan Sacatepéquez; 24 of which are for the violence of the September 19. The other warrants were issued against leaders and organizers of the communities in resistance. At the time of publication, 5 arrests have been made.

1,000 military units have been deployed alongside the police forces to assist in the stabilization of the community, a degree of disproportionate use of force that has become the norm in Guatemala,

In a phone interview, Mauro Cotzojay, a campesino in the community of Pilar I, describes the atmosphere as being “a state of fear.”

“There is no liberty,” said Cotzojay. “We are being occupied.”

For others, the presence of military in the communities has brought back painful memories of Guatemala’s dirty war.

“It feels as if we are returning to the era of the internal armed conflict,” says Chocón. “The military is once again in our communities. The state is protecting the interests of the businesses, and not of the communities in struggle.”

Jeff Abbott is an independent journalist currently based out of Guatemala. He has covered human rights, social moments, and issues related to education, immigration, and land in the United States, Mexico, and Guatemala. He has written for the Upside Down World, Waging Nonviolence, and In These Times. Follow him on Twitter @palabrasdeabajo