Skylight Pictures’ ‘Dictator in the Dock’ throws open the trial doors to the world. 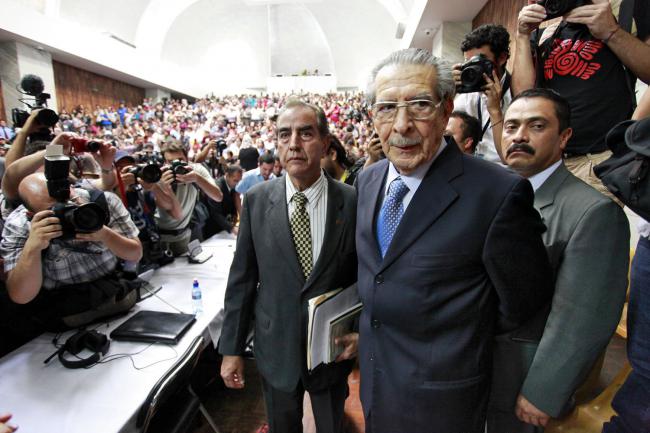 NACLA is running selected free episodes from the web series Dictator in the Dock. The full series and access to the educational hub is available through New Day Films.

For live tweeting of the trial, follow @NISGUA_Guate (Network in Solidarity with the People of Guatemala in English) #SiHuboGenocidio or @PZPenVivo (Pláza Pública en español) #JuicioGenocidio.

What a moment that was! General Ríos Montt convicted and sentenced to 80 years in prison. On May 2013, Guatemala, this small, Central American country, had for the first time anywhere in the world successfully prosecuted a case of genocide committed against indigenous people. Hundreds in the courtroom could not be silenced, and as they poured onto the streets to spread the news, they were dancing, shouting Justicia!, and singing the words of an Otto Rene Castillo poem, “Here, no one cried / Here we only want to be human / Eat, laugh, fall in love, live / Live life, not die,” evoking the memory of those who perished at the hands of the genocidaires.

I had gone to Guatemala in March of 2013 committed to filming the entire trial, gavel to gavel, with two cameras and a film crew of Guatemalan, Colombian, and U.S. filmmakers. We were determined to document this groundbreaking trial in its entirety—to throw open the trial court doors to the entire world. We began by uploading a new webisode of trial highlights every few days. Eventually, these trial highlights turned into Dictator in the Dock, a 23-episode webseries and online educational hub. The final webisode, “The Verdict,” recapitulates the trial in 14 minutes, with the reading of the verdict as the narrative spine.

But 10 days after the verdict was announced, the pendulum of justice that had swept away the impunity of the old order swung back like a wrecking ball to destroy the gains made. Ríos Montt’s guilty verdict was vacated on a procedural technicality by the Constitutional Court, with the case set to resume again in January 2015. While over the past few weeks Rios Montt’s lawyers have made last-minute attempts to thwart the trial from moving forward, we share with NACLA readers, this morning, January 5, as the trial resumes once again, our first Dictator in the Dock episode “Anticipating Justice,” filmed on the first day of the trial in March 2013.

A number of events in the months since the verdict was first announced have exposed the fragility of challenging impunity in a state whose legal and political ties to a genocide committed just over 30 years ago remain strong. Ríos Montt’s lawyers’ principal legal strategy has been to delay and to deny in order to prevent Ríos Montt, now 88, from ever going to prison. The Attorney General, Claudia Paz y Paz, who vigorously prosecuted the Ríos Montt case, was forced out of office early. The following day she left the country, and her assets and bank accounts in Guatemala have been frozen since.

Judge Yassmín Barrios, head of the tribunal of the three judges who tried the case—herself a model of judicial rectitude in Guatemala—has been professionally censored by The Court of Honor of the Bar Association of Guatemala on a bogus accusation that she disrespected and defamed Ríos Montt’s defense team. In fact it appears that the opposite was true, as can be seen in the scene from the episode “Respect” from the Dictator in the Dock series. And worse, Judge Barrios has been marginalized by many of her fellow jurists who are afraid to show support for her. She has become the victim of slander and has been threatened with physical attacks. Her world is circumscribed between home and the courts, and she has 24-hour police bodyguards. She continues to assert that the Ríos Montt trial was fair, and in an interview with Skylight Pictures for our upcoming film 500 years, reiterated that “the verdict and the sentence did exist; they were born in a court of law, they achieved national and international recognition, and they are irrefutable.”

In a shocking suicide that dismayed the judicial community and human rights defenders, Supreme Court Justice César Barrientos Pellecer, one of the greatest crusaders against impunity in Guatemala, was unable to endure the number of threats against him and the legal action taken against members of his family. As president of the Criminal Chamber of the Supreme Court of Justice, he supported and helped implement the High Risk Courts for the most serious crimes, where Ríos Montt was tried.

Though one of several actors working to wipe out the court’s guilty findings, the organization the Anti-Terrorism Foundation is emblematic of the neo-fascism dominating the post-trial debate. They assert that “Guatemala is not a genocidal country.” And incumbent President Otto Perez Molina, as he told Nobel Peace Laureate Jody Williams, members of the Nobel Women’s Initiative, and me at a meeting in 2012, concurs. The Foundation has made numerous attempts to discredit Guatemalan and international experts who testified for the prosecution in the Ríos Montt trial, calling them “enemies of the state” in full page ads in Guatemalan newspapers and on television. The Public Ministry and several private citizens have brought spurious criminal charges against the most effective activist leaders.

Together with this foreboding legal climate, on May 13, 2014, the Guatemalan Congress voted 87 to 24 to adopt a resolution decreeing that “no genocide occurred in Guatemala.”

The government of Guatemala has hired the Washington DC Public relations firm of Otto Reich (remember him as the effective promoter of the U.S.-backed Anti-Sandinista contras as “freedom fighters”?). He states in his Foreign Agent Registration that he is to “design a strategy to move forward [to] change North American political parties that are willing to abandon the reference of the Guatemala of the 1970s and 80s, as well as the last century, and are eager to talk about the present and future of Guatemala of the 21st century.”

Right after the verdict was read, The Association for Justice and Reparations (AJR) and the Center for Human Rights Legal Action (CALDH) published Yassmín Barrios’ 718 page sentencing report that describes in great detail the evidence behind Ríos Montt’s conviction for genocide and crimes against humanity. They have distributed the book widely throughout the Mayan highlands, where the survivors, witnesses at the trial, and large segments of the population consider that the guilty verdict is valid. On Nov. 6, 2014, AJR and CALDH’s legal representatives of the victims petitioned the Inter-American Commission on Human Rights to condemn the state of Guatemala for obstructing justice and promoting impunity for crimes of genocide and crimes against humanity committed against the Maya-Ixil people.

The reverberations from the Ríos Montt trial continue to threaten the powerful and to empower the dispossessed.

The fight-back on the grassroots level is gaining momentum. Peaceful resistance protests against the extractive industries continue, and are becoming more forceful. On June 23, 2014, 50,000 people came out in support of a National Mayan Work Strike, creating human blockades in 29 places on the Pan-American highway from Tecpán to the Mexican border, ensuring that no commercial truck serving the mega-projects could do business as usual that day.

The popular song “Amnesia,” written and performed widely by Alejandro Arriaza and rappers Alioto Lokos, sums up the mood:

ni que tenemos muy buena memoria. / Nor that we have very good memory.

Y ahora resulta que ellos son los buenos, / And it turns out that they are the good ones,

y ahora resulta que no hicieron nada, / And that they did nothing wrong,

pero no vamos a morder su anzuelo: / But we’re not going to fall for that:

Pamela Yates is a co-founder of Skylight Pictures, and director of the documentary films When the Mountains Tremble, Granito: How to Nail a Dictator, Dictator in the Dock and the forthcoming 500 Years. She is a contributing editor to NACLA.