Straight Talk on How Maduro Measures Up to Chávez

Critiques from both Chavistas and the opposition in Venezuela raise the question: How to evaluate a government committed to a gradual democratic road to far-reaching change in the context of extreme polarization and conflict?

An earlier version of this article appeared in the New Left Project. 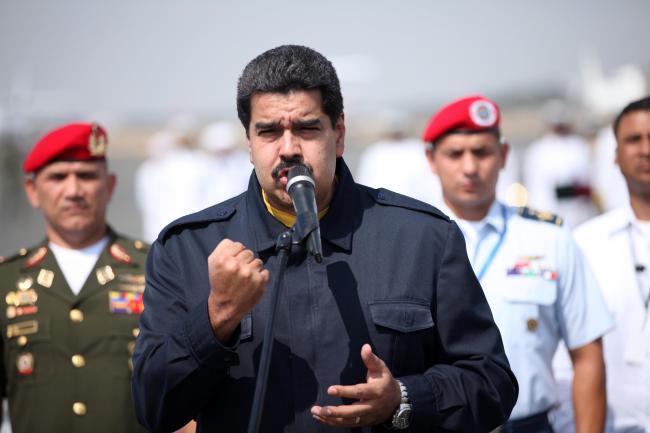 Nearly two years after Hugo Chávez’s death, the key question facing many on the left, in Venezuela and elsewhere, is whether his successors are true to his legacy. Or has the “revolutionary process,” initiated more than a decade ago, been stalled and betrayed.

Recent pressing problems have convinced some Chavistas that, at best, President Nicolás Maduro is severely lacking Chávez’s political acumen. High on the list are the chronic shortages of basic consumer goods, as well as annual inflation of over 60%. Both, Maduro claims, are part of an “economic war” waged by powerful interests to destabilize Venezuela.

These scourges were also prevalent under Chávez, but with less intensity, and in any case he faced them head on. When shortages of commodities became particularly severe in 2007, Chávez decreed widespread expropriations. In 2009 he attacked the corruption that propelled a major financial crisis by jailing at least 16 bankers and nationalizing 13 banks. Radical Chavistas complain that Maduro lacks this type of audacity.

Their critiques raise the question of how to evaluate a government committed to a gradual democratic road to far-reaching change in the context of extreme polarization and conflict. Is a lull in the deepening of change, including compromises with adversaries, necessarily a sign that all has been lost, as those who invoke the term “permanent revolution” often argue?

Certainly history is replete with examples of governments committed to structural transformation that, after initial advances, begin to backslide and end up completely abandoning the struggle. On the other hand, Lenin’s slogan of “one step backwards to take two steps forward” (in reference to his nation’s New Economic Policy) may be a more applicable framework to consider Venezuela under Maduro, as some Chavista moderates suggest.

One key to Chávez’s success was his skill in converting each electoral and non-electoral victory into new stages of transformation, thereby weakening his adversaries. Early victories set the stage for controversial anti-neoliberal legislation in November 2001, including an agrarian reform and a nationalistic oil law that increased state control and revenue. His 2006 re-election, with the highest percentage in Venezuela’s modern history, paved the way for nationalization of several strategic industries.

In 2014, Maduro broke with this trajectory. After emerging victorious in May after three months of civil disobedience and urban violence that sought his overthrow (known as the “guarimba”), Maduro failed to make any bold moves. Instead he continued his call on the opposition to negotiate through dialogue in order to ensure stability.

Maduro’s “peace dialogue” meetings—regardless of whether they resulted in concessions to the private sector (as radicals claim) or failed to produce concrete agreements (as the opposition insists)—created a climate conducive to the reestablishment of order. An unexpected reward was that it opened up divisions in the enemy camp by pitting the private sector (who agreed to participate in the dialogue) and opposition followers (who were appalled by the disorder) against an intransigent opposition, which included nearly all anti-government leaders. The opposition suddenly found itself deeply divided, demoralized, lacking mobilization capacity, and without any leader representing a unified anti-government bloc.

Maduro’s efforts to combat price speculation, hoarding, contraband and corruption, in spite of considerable shortcomings, all define his administration as leftist. Underpinning the measures is a definition of private property, first put forward by Chávez, which rejects the rights of property holders as sacred. In his 2001 agrarian reform and the 2005 decision to expropriate idle companies, Chávez made it clear that private enterprises had well-defined obligations to society, which if not fulfilled, would lead to state intervention.

Maduro has reinforced this principle discursively, as well as in legislation and concrete actions. In November 2013, his government began to control hoarding and sharp price increases by slapping commercial establishments with fines, obliging them to reduce prices and in some cases jailing managers. The campaign struck a responsive chord among voters who gave the Chavistas an 11.5% margin in municipal elections the following month.

Beginning in early 2014, the Law of Just Prices created the National Superintendence for the Defense of Socio-Economic Rights (SUNDDE) and built on existing sanctions against businesses that failed to pay taxes or respect price regulations. The new law limited business profit margins to 30%. In addition, the law established stiff prison terms in cases of contraband (up to 14 years), hoarding and price speculation. By mid-2014, SUNDDE was inspecting over 4,000 businesses each month, of which over 900 were subject to sanctions.

While in some cases SUNDDE forced businesses to lower prices, in others it turned over seized merchandise to community councils for sale or, in the case of medicine, gave it to hospitals. Another radical measure was the confiscation of semi-trucks transporting contraband to neighboring Colombia.

The Maduro government has also retained Chávez’s insistence on private sector obligation to maintain reasonable production levels. In September 2014, the government guaranteed production in two plants of the U.S.-based chemical giant Clorox, which several weeks earlier had closed down and been taken over by unionized workers. “This intervention serves as a warning to other companies,” said Vice President Jorge Arreaza, when he toured one of them. The move was particularly bold because, unlike the Venezuelan companies that had closed and then been taken over by Chávez’s government in 2005, the multinational Clorox could seek legal redress in international tribunals.

Those who characterize Maduro’s rule as one of retrenchment fail to recognize that governments prior to Chávez never confronted the business sector by temporarily occupying commercial establishments and warehouses, confiscating contraband trucks, encouraging community involvement to counter business abuses, or placing limits on profits.

The government’s prosecution and jailing of fellow Chavistas on charges of corruption is also without precedent, even though these moves have not yet effectively deterred unethical practices. Former minister and governor of the north-central state of Aragua, Rafael Isea, recently fled the country, charged with misuse of public works funds. Contrary to the undocumented claims that these actions are reprisals against Chavista dissidents, Isea, as well as several other high-level arrested Chavistas, had been closely associated with the PSUV leadership. Some 493 Venezuelans were jailed on corruption charges during the first half of 2014.

Nevertheless, clear limitations and shortcomings are evident. Most importantly, detailed information about probes and judicial proceedings against contraband, hoarding, and price speculation has not been forthcoming. This has produced skepticism among some rank-and-file Chavistas that the government lacks commitment in facing down powerful economic interests, and rather focuses on truck drivers, smaller merchants, and those in the informal economy. While the Maduro government has sanctioned large commercial establishments as well, it has apparently been receptive to the private sector’s insistence on the rights to defense through traditional legal channels, rather than the fast-track process the radicals deem necessary during the current crisis.

Maduro’s Achilles heel has been the inability to halt the spike in the open-market exchange rate, which by December 2014 reached 160 bolívares to the dollar (a more than two-fold increase in 12 months). Conservative opposition leaders blame the problem on the Chavista original sin of establishing exchange controls in 2003. This system, however, functioned relatively well for nearly a decade, as the disparity between the open-market exchange rate and the official rate remained a manageable two to one. On the left, critics tend to attach ideological tags to this complex problem rather than recognizing that the crisis requires practical solutions free from dogma of either the neoliberal or Marxist variety.

When the rate initially doubled in late 2012, the Chávez government neither increased the official rate nor clamped down on price manipulation. Chávez was only months away from dying, and undoubtedly, his decision-making capacity was limited. Maduro inherited the dilemma: any devaluation ran the risk of triggering rampant inflation. Needless to say, for Maduro to have blamed the much-venerated Chávez for allowing the exchange rate to spiral out of control would have been considered a sacrilege.

The government’s fear is that if the difficult and necessary measures, such as a series of mini-devaluations and increases in the price of gasoline (currently the cheapest in the world) are too precipitous, they run the risk of sparking either mass protests (as neoliberal “shock therapy” did in the 1980s and 1990s) or steep inflation, or both. And if compensatory programs are not in place, the poor will bear the brunt of the measures.

Scarred by the political precariousness during the guarimba and mindful of the upcoming congressional elections in late 2015, Maduro says he will act on the exchange rate during more favorable circumstances. In hindsight, the ideal time to have done so was on the heels of the electoral victory in the December 2013 municipal elections or the defeat of the guarimba in mid-2014, when the government had the upper hand. This might have occurred had Chávez not died.

While Maduro has sometimes lacked Chávez’s political savvy and has failed to check inflation, he has demonstrated a firm commitment to confronting business abuses, a record unmatched by more advanced capitalist nations in recent decades. Where the Maduro government can be faulted, however, is in its slowness in responding to the exchange rate crisis.

Criticism of the government from those supportive of Venezuela’s process of change comes from diverse quarters, particularly Chavista intellectuals and left-wing factions, but their opinions reflect the real frustration of much of the rank and file. This erosion of enthusiasm is perhaps natural given the Chavistas’ 16 years in power. It is aggravated by the urgency of the nation’s mounting economic problems, intensified by the recent plunge in oil prices, as well as by visible evidence of extensive corruption.

The PSUV leadership frequently employs a favorite Chávez slogan, “Unity, Unity and more Unity,” against its critics on the left. Washington’s unyielding hostility to the Chavista project, which was most recently demonstrated by sanctions imposed by the Obama administration, bolsters the argument for toning down internal criticism and closing ranks.

However, the pressure to maintain unity has meant a growing PSUV leadership intolerance as demonstrated by the significant number of critical Chavistas who have had their programs removed from state-run radio and television. Vanessa Davies, a long-time leftist who formulated tough questions on her popular TV interview program “Contragolpe,” is one. Some Chavista cabinet ministers considered her such a thorn in their side that they were reluctant to appear on her show, until, as Davies told me, they were pressured to do so by Chávez himself.

A first step in the creation of a much-needed pluralism would be to separate at least part of the leadership of the PSUV from the state, that is, the cabinet ministers and governors who currently control the party. Not one of the PSUV’s eight vice presidents are social movement leaders. Correcting this imbalance would provide venues for “self-criticism” from below.

Chavista leaders need to recognize both in discourse and actions that criticism from within is part of the solution, not the problem. At the same time, radical Chavistas, regardless of the veracity of their criticisms, exaggerate when they argue that revolutionary goals have been abandoned and that the process of change is fully in reverse.

Steve Ellner has taught economic history at the Universidad de Oriente in Puerto La Cruz, Venezuela since 1977. He is the editor of Latin America’s Radical Left: Challenges and Complexities of Political Power in the Twenty-First Century (Rowman & Littlefield, 2014).