Pedro Lemebel was an uncompromising fighter for human and sexual rights whose work will forever challenge the homophobic culture of the Chilean left. 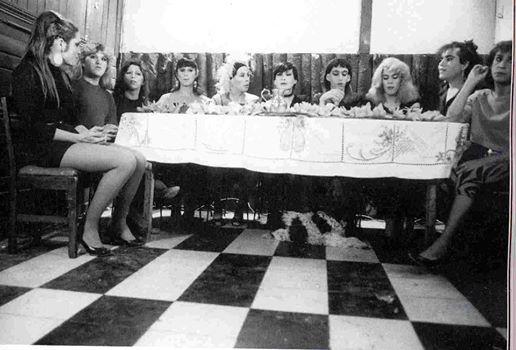 It is with sorrow that we share the news of the death of Pedro Lemebel (1952-2015), Chilean performance artist, writer, and radical homosexual activist. Pedro Lemebel was the consummate chronicler of the margins of Chilean society—an uncompromising fighter for human and sexual rights whose work will forever challenge the homophobic culture of the Chilean left. NACLA was fortunate to publish some of his writings and today, in his honor and memory, we share his chronicle of the death of the tyrant. Pedro Lemebel will, without doubt, enter his place of rest under a shower of red petals. May he rest in power.

Farewell, Meatbag: On the Death of Pinochet

And so it happened, just like that. The swollen dictator croaked, and the generals, secret-service types, cadets and all the military pomp ran amok through Santiago’s upper-class neighborhoods, beating their chests with bricks as they mourned the noisy death of the Chilean ogre. It was a last burst of arrogance, a funerary flatus that finally freed the world from this putschist nightmare. And it was unbelievable—the old bastard looked like an armored war vessel resisting postmortem judgment. Like a slimy toad, he escaped myriad indictments for crimes and atrocities. Death got him before justice. But his mocking grimace from beneath the glass of his coffin was itself stamped by the saliva of the young man who waited hours and years to expectorate upon that macabre smirk. So many of us felt represented in that spit projectile, as we toasted, danced and clicked our high heels on the Alameda, Santiago’s main thoroughfare, amid water cannons and tear gas, celebrating the last breath of the beast. But there was also disappointment in the air, an abject emptiness left behind by impunity. That great debt of justice will remain a sinister stain on the history of the Chilean judiciary, which washed its hands with excuses—we couldn’t, we ran out of time—delays and red tape, obstructing the long-awaited conviction.

The general’s fans were forced to keep their decadent mortuary performance within the confines of the upper-class neighborhoods. And they moved him quickly, flying him over the city, for fear that the people would take revenge on his putrid remains. He could not travel the roads of our dead. Not the Alameda, not Avenida La Paz, not the flower market, nor Avenida Recoleta, nor the lavish entrance to the same General Cemetery where our great Gladys Marín, consummate leader and presidential candidate of the Communist Party, entered under a shower of red petals. For the tyrant, there was only a hurried funeral, an emergency farewell with thousands of supporters sweltering under the summer sun in line to see the meat bag in the window. We never imagined there would be so many, standing in line with their fascist cruelty tattooed on their mouths. Almost in its entirety, the Chilean right stood at the foot of his coffin, gasping like lizards in the desert sun. I lost count of the number of services, rosaries and masses performed by military priests. Some workers yelled “Murderer!” from atop the scaffolding at a construction site, and the rich Tasmanian-devil woman at whom it was directed unleashed her fury on the window panes of the ground floor. Those workers were the dignified pueblo that recognized him for what he was until the end.

The news grabbed headlines, and some well-known journalists and TV personalities were seen speaking with a lump in their throats. And once again we Chileans saw on our television screens the procession of bootlickers, the former cabinet ministers, the Junta advisers, gargling to justify the genocide—repugnant characters bent on beautifying horror with the sheen of economic growth. The celebrity set was also sad; some dressed appropriately for mourning, shamelessly flaunting their addiction to the general. One of them was seen marching down the Alameda—a bipolar blonde woman who claims to be a former member of the Communist Party, although no one I know can verify it. I hope she stops talking about me on her stupid celebrity show because I am not her friend. I have no friendship with those who mingle with fascists.

Let’s be clear. There will be no forgetting, no forgiveness and no Christmas or New Years reconciliation. And let there be no doubt that the struggle to bring the rest of them to justice will extend well beyond the death of the dinosaur. Behind the black, fetid smoke of his cremation lies a country divided forever, cut by a ditch of death without bodies that will never be closed by the pious genuflection of forgiveness. On the streets of celebration, I ran into many friends I had not seen for years, and the emotion made us remember those who are no longer here and who left without ever learning of the whereabouts of their disappeared. But that melancholy was the only cloud on an otherwise bright and sunny day, with red flags animating the noisy carnival. Entire families walked the Alameda covered in confetti, and even the stray dogs shook their tails, barking happily on that multicolor afternoon.

Pedro Lemebel is a Chilean writer and visual artist, and a founding member of the Yeguas del Apocalipsis performance duo. This piece originally appeared in La Nación, a Chilean newspaper, in December 2006, and was translated by Marcial Godoy-Anativia for NACLA.