Art, politics, and violence collide in the murder of journalists in Veracruz. 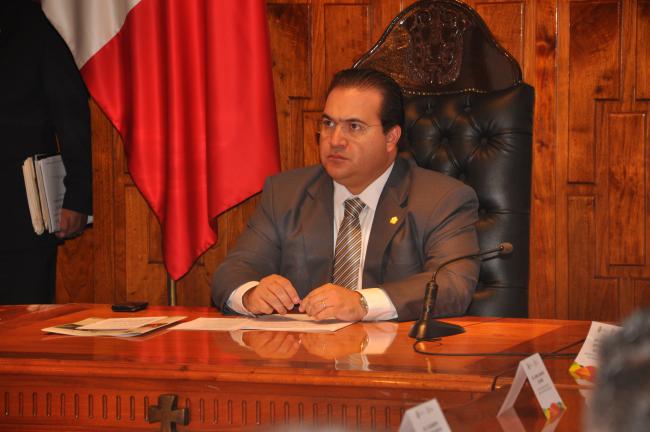 The Hay Festival of Literature and the Arts Mexican “edition” in Veracruz faced a crisis of legitimacy this year after 300 writers and journalists condemned the murder of journalist Moisés Sánchez and petitioned Hay’s directors to withdraw the festival from the state capital of Xalapa.

Starting in 2011, with the support of the British Embassy in Mexico and the British Council, the Hay Festival, a twenty-five year old literary festival from Wales, has held a Mexican edition at the beginning of every October in Xalapa.

The Hay Festival has other gatherings in places like Kerala, Dhaka, Beirut and Cartagena. At these events the global literati fly in for book readings, panel discussions, and interviews in the local cultural milieus. But Hay Xalapa has also been invaded by local, national, and international politics: it has served as an opportunity for Veracruz’s controversial, authoritarian governor, Javier Duarte, to burnish his image. Duarte attends the festival, has his photos taken with writers like Salman Rushdie and Wole Soyinka, and dines and wines visiting ambassadors including, of course, the British ambassador to Mexico. Veracruz represents a strategic economic opportunity for British companies and the Hay Festival helps Duarte to appear urbane and as a supporter of free expression.

But since 2010 when Duarte became governor, 15 journalists have been murdered or disappeared. Moisés Sánchez is the latest journalist killed in Veracruz, abducted by armed men on January 2nd of this year and found decapitated three weeks later. In late January, after years of silence from the Hay Festival about the perilous state of freedom of expression in Veracruz, Hay’s directors announced that the festival is fleeing online. Hay Xalapa must be seen as yet another victim of the Mexican state’s failure to protect freedom of expression.

The freedom of expression and information advocacy organization, Article 19, calls Veracruz one of the most dangerous places in the world to be a journalist. In 2012, just as the journalist body count began to surge, Darío Ramírez, Article 19’s Mexico director, called publicly for Hay to withdraw from Xalapa. But Ramírez’s protestations fell on deaf ears until this year.

The British government’s diplomatic and business interests surrounding Hay Xalapa help to explain why it has taken so long for the festival’s directors to respond to concerns about the culture of violence in Veracruz. Mexico and the United Kingdom have dedicated 2015 to a celebration of each other’s respective national cultures. Called the Dual Year, it’s Mexico in the UK and the UK in Mexico, an official attempt to drum up business for British companies in Mexico and project Mexican culture to a global audience. Earlier this month President Enrique Peña Nieto visited London as guest of the Queen and Prime Minister David Cameron, even as the decision to remove the literary festival from Xalapa hit a nerve with British and Mexican diplomats. In London there was no mention of the Hay Festival: it was too much of a sore spot.

In the long run-up to the Dual Year, British officials have leveraged Hay Xalapa to cultivate bonds with the Mexican state and federal government officials. Oil-rich Veracruz is a strategic site for British business. Peña Nieto’s energy reforms mean that British companies view Veracruz as a key place to secure once off-limit oil contracts. The Port of Veracruz requires renovation and expansion and the British government department UK Trade & Investment (UKTI) has been trying for years to make sure British companies maintain a competitive bidding advantage. In June 2014, UKTI ran a “Ports and Trade Mission for British Companies” to Veracruz. So far British companies have nothing to show for UKTI’s efforts: just as Hay pulled the plug on Xalapa, Hong Kong maritime giant Hutchison Port Holdings said it would invest $50 million to renovate its Veracruz port operations. The British Council has been seeking contracts for English language programs in Veracruz’s public schools—Veracruz being one of Mexico’s most populous states.

British officials have known for several years that Hay Xalapa could fall victim to Duarte’s failure to protect journalists. In 2012, the murders of half a dozen journalists in Veracruz so alarmed the British Embassy and British Council that they sent a high-level delegation to Veracruz in late June of that year to investigate any risks to the festival.  Yet no action was taken and Hay Xalapa went ahead as planned.

The British ambassador refuses to account for his meetings with Duarte or go into any detail about the Embassy’s relationship to Hay Xalapa. Both the British Embassy and the British Council in Mexico describe their relationship with the Hay Festival as “independent.” And yet the British Council acts as one of the festival’s global sponsors. In email correspondence with me regarding Hay Festival and journalist killings in Veracruz, the British ambassador and the director of the British Council would say only that they maintained a “dialogue” with the Mexican government on human rights.  In a testy exchange after I asked twice about the failure of these British officials to make a statement at Hay Xalapa to protect journalists and freedom of expression, they wrote that they “have nothing else to add to the conversation.” In 2012 the current director of the British Council, Lena Milosevic, told me “journalists aren’t writers” and that Hay was a “literary festival.”

Peter Florence, the director of the Hay Festival, refused via email to answer any questions about Hay’s withdrawal from Xalapa. He referred me to the statement responding to the 300 writers on Hay’s website. Florence was asked, but would not say, whether British officials in Mexico ever briefed him about a human rights risk assessment for Hay Xalapa.

In the Hay fallout, Mexican writer Álvaro Enrigue explained in the pages of the Mexico City daily newspaper El Universal how he agonized over signing the petition, having appeared at Hay Xalapa twice. He noted ruefully: “if maybe we had made an international scandal before, Moisés Sánchez would still be alive.” It is indeed a shame that it took an international scandal to point out the obvious: the absence of state protection for expression in Veracruz. Every October since 2011 the British ambassador in Mexico has had Governor Duarte’s ear at Hay Xalapa. But rather than distancing the British government from Duarte’s human rights crisis by moving from dialogue to action, British officials seem to have focused on securing contracts.

Journalist Patrick Timmons is an Americas-based human rights investigator, writer and univesity lecturer with a law degree in International Human Rights Law from the University of Essex, UK. From 2011 to 2012 he was the Human Rights, Migration and Security Policy Officer for the British Embassy in Mexico where he reported on the murders of journalists in Mexico.