Where the Argentine Debt Case Stands Now, and Why it Still Matters 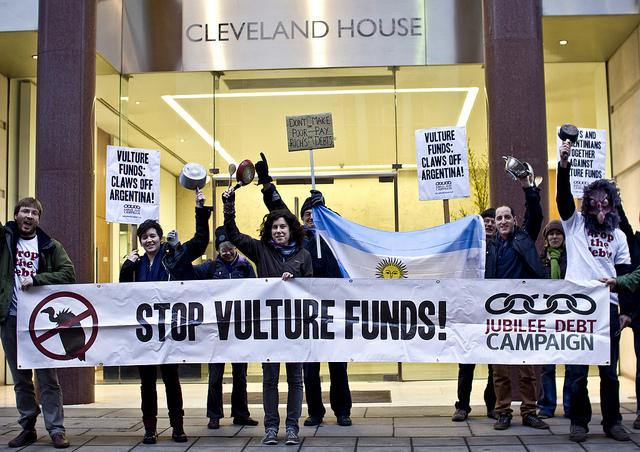 In NML v Argentina, the world continues to witness a rare and surreal spectacle: the unpredictable consequences unleashed by a U.S. judge going rogue on the law. Last June, the U.S. Supreme Court validated a lower court ruling that granted investment group NML Capital the right to obtain payment of 100% of its claims against the Argentine government, setting a legal precedent whose impact  is just beginning to become clear.

NML’s actions against Argentina demonstrate why the firm is frequently described as a “vulture fund.” After initially acquiring Argentine sovereign debt bonds following the country’s 2002 default, the investment group refused to accept the terms of the agreement that Argentina reached with over 92% of bondholders, in 2005 and 2010. Then, NML sued in U.S. courts for payment of 100% of its bonds’ value, plus interest, aiming to get what amounts to a 1600% return on its original investment.

NML’s lawsuit was part of a carefully thought-out script during Argentina’s long debt restructuring process, a strategy that vulture funds have exploited in the past. First, buy the debt of a country in trouble, on the cheap. Second, systematically reject any offer of a deal worth less than the whole claim. Third, wait until the country’s circumstances improve, aided by a mix of debt relief granted by other creditors and the normal healthy impacts that such debt cancelation, if timely and sufficient, will have on the debtor country’s economy. Then, sue for the whole amount of the claim plus interest.

It is easy to see that if all creditors followed this playbook—waiting for the debtor to get better without sacrificing any part of their credit—the strategy would not work.

Unfortunately, at the international level and for nations issuing sovereign debt, there is no recourse to anything like bankruptcy, so they are exposed to rulings – even divergent ones – made by judges with jurisdiction over particular bonds.

In this particular case, U.S. Judge Thomas Griesa decided to depart from the traditionally accepted interpretation of the pari passu clause typically inserted in sovereign bonds. Whereas the standard pari passu clause is normally understood to grant equality of rank and treatment, Griesa extended the interpretation to forbid Argentina from making payments on its restructured debt without also paying the holdout bondholders.

Argentina went ahead and deposited the payment for its restructured bondholders with the banks the instruments designate as fiduciaries – in charge of collecting the payment and giving it to the bondholders. Since the banks took the judge’s order to mean they could not disburse those funds, an anomaly has emerged: a country complying with its debt obligations falling into default due to a foreign court preventing payment from being disbursed. Amazingly, the unusual nature of the ruling was only the beginning of a sui generis scenario that continues to unfold.

Holders of bonds that were restructured under European or Argentinean jurisdiction filed claims arguing that by blocking payment on their credits—even when made by U.S. banks—Judge Griesa had overstepped his jurisdiction. In fact, the judge has already granted several “one-and-only-time” exceptions so the fiduciary banks could make payments to certain non-U.S. bondholders. When one of the banks, Citi, requested that the injunction be lifted for those payments, to avoid requesting an exception every time interest payments came due, the judge denied the request, only to later backtrack on his own decision. But while agreeing to give Citi this maneuvering room, the judge expanded the initial order – and the jurisdiction overstep – by ruling that future debt under Argentine law, if it will or can be paid in U.S. dollars, qualifies as external debt. So, financial entities helping Argentina make any such payments would be prevented from doing so by the court order.

An English court, in one of these cases, ruled that payments deposited with the fiduciary institution in New York are the property of the bondholders, and no longer belong to the debtor country. Therefore, they should not fall under the jurisdiction of a US judge. Indeed, therein lies another anomaly created by the judge’s ruling: His decision ignored the arrangement Argentina reached with 92% of creditors, but then issued measures that affect payments to these majority creditors—arguably bringing them coercively under his jurisdiction.

The Argentinean Congress also passed legislation according to which it will give non-restructured bondholders – such as NML – the same deal it granted to the restructured ones, but no more. To fulfill this commitment, the government has been depositing these payments in an Argentinean banking institution , which the “vulture funds” could claim at any moment if they so wished (so far they have not).

Some observers speculated that the Argentinean government would agree to settle with the vulture funds after expiration of the RUFO clause. RUFO stands for “right upon future offer” and is inserted in the restructured bonds to promise their holders they will have a right to be offered any better deal that other bondholders receive in the future. If Argentina had settled before the expiration of the clause, it could have faced immediate demands from majority bondholders for payments proportionally equal to those made to NML. But the expiration of the clause in January did not bring any change to Argentina’s offer to the vulture funds. These observers’ speculation failed to recognize that a settlement where NML gets paid the whole amount it demands—even in the absence of the “RUFO effects”—could invite lawsuits from other non-restructured bondholders. In fact, in the wake of the Supreme Court’s ruling last June, some of those bondholders have already filed suit hoping to follow in the footsteps of NML. Since these investors hold claims to some $15 billion, this is hardly an advisable course of action for Argentina.

Regardless of what happens with Argentina, however, repercussions from Griesa’s decision reach much farther. The ruling continues a trend that, legal experts say, has seen holdouts increasingly better treated by courts, at the expense of the soundness of sovereign debt restructurings. What former IMF economist Anne Krueger characterized in 2003 as a gap in the international financial architecture is now wider than ever. By increasing the potential rewards of holdout behavior, this recent judicial precedent will make future debt crises harder to resolve, with unpredictable systemic consequences.

At the same time, creditors might opt for a jurisdiction where the traditional understanding of pari passu still holds – such as England-- at the expense of New York’s current dominance as a preferential jurisdiction for issuing sovereign debt. Indeed, a large number of prominent economists warned of this possibility following Griesa’s ruling.

Last September, facing the United States and other countries’ continuing resistance to reach a consensus, developing countries voted to create a sovereign debt workout mechanism, and negotiations have begun on establishing such a legal framework at the United Nations. Even in the worst-case scenario—failure to get all countries on board—these negotiations would create a U.N.-endorsed standard for settling future sovereign debt crises. If history is any guide, there is one thing we know for sure: sooner or later there will be a country that needs to resort to it.

Aldo Caliari has been, since 2000, staff at the Washington DC-based Center of Concern where, since 2002, he has been Director of the Rethinking Bretton Woods Project, focusing on linkages between trade and finance policy, global economic governance, debt, international financial architecture and human rights in international economic policy.