Securing the “rule of law” and purging corrupt politicians will not suffice—only structural transformation (i.e. redistribution) will address the roots of Guatemala’s democratic malaise. 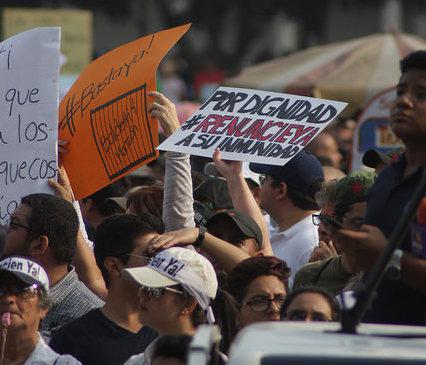 Four sustained weeks of civil protest sparked by outrage at a corruption ring in the Customs office have brought the Guatemalan government to its knees. Vice President Roxana Baldetti was forced from office amid ongoing investigations into her involvement in a customs tax evasion scheme at the Superintendéncia de Administración Tributeria (SAT). This scandal—known as La Linea in reference to a phone number used by individuals to facilitate customs tax evasion—was uncovered by a wiretap placed by the Commission Against Impunity in Guatemala, (CICIG) a UN-established investigative body charged with eradicating clandestine criminal organizations infesting the Guatemalan state.

Subsequent revelations and news reports poured gas on the fire: Baldetti and Molino own giant mansions and are linked to illegal jade trafficking; key figures in the criminal network were released after bribing judges; and the existence of “bufetes de impunidad”—entire law firms that select and bribe judges for a fee. Dozens are under arrest, and Baldetti’s personal secretary, Juan Carlos Monzón, a ring leader who was caught on tape, fled the country.

Baldetti’s humiliating fall was cheered by thousands of protestors who had been carrying banners, chanting #Renunciaya! (Resign/Give up already!), circulating scathing satire on social media, and heckling candidates from traditional political parties. Emboldened by their victory, protestors continue to demand the resignation of President Otto Perez Molina, an independent investigation, and arrests. Baldetti lost legal immunity when she resigned.

This is the largest, most sustained popular protest since the “Democratic Spring” of 1944 to 1954, when the modestly redistributive agenda of an elected government was cut short by a coup. Orchestrated by Guatemalan elites and the CIA, the overthrow of President Jacobo Arbenz set the course for decades of armed conflict in which over 200,000 people were murdered. Some observers see a new democratic spring dawning in a rare alliance between the urban middle class and progressive movements forged through common revulsion at outrageous greed and impunity in the current administration. Protestors in Guy Fawkes masks and Anonymous addressing the country over social media conjures the specter of “Occupy.” Despite an initial mainstream media blackout, protesters networked over social media and broadcast their message in Mayan languages on community radio.

The $120 million hueveo (robbery) of the SAT was despicable even by Guatemalan standards, and touched off a deep well of frustration with Guatemala’s young democracy. The 1996 peace accords aimed to address Guatemala’s legacies of authoritarianism and colonialism, but they were actually quite moderate. Aggravating their insufficiency, the conservative regimes that dominated subsequent elections blocked their substantive elements, imagining the transition to multicultural democracy as a transition to neoliberal economics—not a radical expansion of citizenship.

Unable to effectively fight crime, Perez Molina’s administration has done the dirty work for foreign capital by declaring states of siege, taking political prisoners, and assassinating leaders in various communities that have opposed extractive industries. State security forces opened fire on a crowd of peaceful protestors in Totonicapán in 2012, killing seven. Despite these threats, in 2014, indigenous protests forced the repeal of the “Monsanto law,” which recognized intellectual property claims for GMO crops.

Where Will this Lead?

How far can these protests go towards transforming the unjust structures of Guatemalan society and its authoritarian political culture? What kind of movement will emerge out of this latest political crisis? Mass protest against impunity in Guatemala is cause for celebration, as it cuts to the heart of the nation’s social contradictions. However, some reasons for caution can be found in the social composition of the protests, the objectives and conceptions of democracy of different protest factions, and the forces already mobilizing to resolve the crisis on terms favorable to dominant sectors.

In contrast to the Democratic Spring, whose major reforms responded to peasant protest, the #Renunciaya movement has been led by primarily ladino (non-indigenous) middle-class and youth in the capital city, although there are many indigenous participants and May 16th protests spread nationwide. While most Guatemalans may want the Vice President and President to go, beyond this the demands become more diffuse. All groups espouse “democracy.” But some want major structural transformation, while others seek a restoration of political order and an upholding of the rule of law.

That the scandal broke in high electoral season magnifies the significance of the protests, which quickly morphed into a full condemnation of party politics, not just the Partido Patriota (PP). As if proving the protestors’ point, when the PP imploded, many of their congressional representatives and mayors joined the Lider party, whose chief, a millionaire businessman from the Peten, Manuel Baldizón, was already favored to win the elections. The stench of intra-party collusion sparked protests at Baldizón rallies.

A picture circulated of a lone young man in a crowd of red-shirted Lider supporters, defiantly holding up a sign that read “No soy estupido! Lider=PP.” The photo went viral, along with memes ridiculing Baldetti and Perez Molina and the warning “not to touch” Baldizón. Most protestors decry the systematic corruption of party politics. Some blame corruption for poverty and underdevelopment, and for underfunded nutrition programs specifically: Perez Molina’s signature humanitarian initiative was a “war” on chronic child malnutrition.

Beneath the call for renuncia, however, lay heterogeneous agendas. Not everyone wants radical change, even if they are disgusted with corruption-as-usual. It is telling that just before Baldetti caved, the elite Comité Coordinador de Asociaciónes Agrícolas, Comerciales, Industriales, y Financieras (CAFIC) joined calls for her resignation, along with the US Embassy, hoping that sacrificing her would ensure stability.  Conservative anti-corruption protests in Brazil demonstrate this dynamic.

Moreover, it is not at all clear that rural Mayas, many of who support the protests, will heed the call to abandon party politics. Although well aware of endemic corruption, most recognize certain types of corruption, particularly kinds involving more redistribution than self-interest, as morally acceptable. In addition, many view party politics as one of the only means to access scarce resources, through legal and illegal means, and usually by electing corrupt officials. Abstaining from politics and corruption are moral luxuries most villagers cannot afford. Mayas also have the most reason to fear state violence that almost always targets radical movements. Middle-class ladinos and elites rarely support rural movements; to the contrary, they often denounce them as violations of the rule of law.

Anti-corruption discourse has a limited political horizon. It tends to focus on the individual immorality of corrupt officials, rather than the structural contradictions that make corruption a ubiquitous feature of political life. At the heights of wealth and power, the law can be bought or intimidated—an extension of Guatemalan inequality’s creation in a project of violent dispossession. In the poorest villages, corruption is an inevitable consequence of engaging with these same powerful entities that demand complicity, and who distribute insufficient resources to structurally impoverished communities for political support. Anti-corruption reforms rarely seek structural change and disproportionately criminalize the most vulnerable.

Critiques of corruption figure centrally in neoliberal governance. The World Bank frames corruption as a deviation from the optimal operation of institutions and markets, and, just like protestors, blames corruption for national underdevelopment. Anti-corruption discourse and programs usually frame it as a symptom of a backward political culture, a problem of mindset and education. But poverty and inequality in Guatemala would persist without corruption, through legal defenses of property, however illegally obtained; and it is impossible to imagine a non-corrupt Guatemalan state absent significant redistribution of wealth and power.

The political crisis dramatizes structural contradictions at the heart of Guatemalan democracy and presents opportunities to challenge the conformism and impunity that have long plagued the country. Meanwhile, neoliberals view corruption as antithetical to democracy, blame it for underdevelopment, and propose to resolve it via transparency, rather than recognizing it as an inevitable feature of a democracy founded on structural and political violence. If liberal, reform-minded, middle class Guatemalans are serious about ending corruption, they should also support rural movements for redistribution.

Nicholas Copeland is an anthropologist and assistant professor of American Indian Studies and Sociology at Virginia Tech. His manuscript, Lost in Transition: Mayan Experiences of Democracy in Post-revolutionary Guatemala, examines how structural and political violence, development, and electoral democracy foster grassroots support for authoritarian politics in rural Huehuetenango.