Hilary Klein Klein worked in collaboration with women’s collectives in Zapatista communities in Chiapas from 1997 to 2003. Compañeras documents the changing roles, rights, and personal and political relationships that grew out of their struggle. 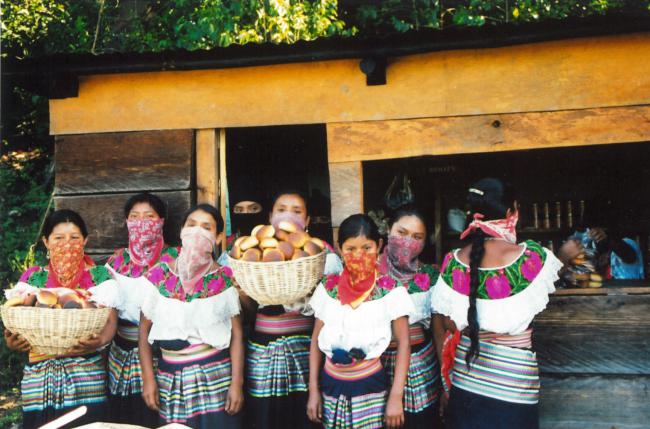 When poor, indigenous people and peasants took over land and municipal governments in Chiapas, Mexico on January 1, 1994 just as the North American Free Trade Agreement went into effect, the uprising shook the world. Through individual interviews and collective interviews at women’s assemblies, Hilary Klein’s book, Compañeras, charts the changes in women’s roles, leadership, rights, and power in intimate relationships, families, and communities that the Zapatista movement brought.

The title Compañeras captures the core of Klein’s project, which both describes her subject, Zapatista women and their political relationships, as well as her approach of being a compañera herself by building relationships of trust and mutual support.  From 1997 to 2003, Klein worked in collaboration with women’s collectives in Zapatista communities in Chiapas. She co-developed a project called Mujer y Colectivismo, which supported Zapatista women’s cooperatives with leadership development, popular education materials, regional gatherings, and rotating loan funds.  Regional authorities asked her to teach basic mathematics to women who needed these skills to run their cooperatives.  In times of heavy state repression, she joined human rights delegations to interview women after military attacks on their communities.  In the process Klein developed a high degree of trust with women leaders; she “slept in their homes, worked in their cornfields with them, and played with their children” (p. xxii).  The richness of the interviews and collective testimony through group interviews is based on thattrust.

Other sympathetic outsiders-with-inside-perspectives and engaged scholar-activists in Chiapas have written about the Zapatistas, including June Nash, Rich Stahler-Sholk, Leandro Vergara-Camus, Mariana Mora, and Shannon Speed, to name a few.  Klein’s work in Compañeras reflects this sort of committed engagement at its best.

With so much outside interest, Zapatista authorities developed criteria for engagement and meaningful involvement for scholars.  In 2001, Zapatista women authorities in Morelia and La Garrucha asked Klein to conduct a set of interviews in more than two dozen communities to document and teach about the movement’s history from women’s perspectives.  It is significant that Compañeras grew out of these interviews, driven by the movement participants’ own desire to teach the history of their organizing. Unlike descriptions of movements intended solely to inform outsiders, Compañeras addresses questions that clearly matter to the Zapatista women themselves, along with questions that matter to outsiders hoping to bring lessons from the Zapatista movement to their own spheres.

Each chapter uses both individual and collective interviews. The first three chapters outline the history and emergence of the Zapatista movement.  We learn the history of injustices in Chiapas through interviews with mothers and grandmothers of Zapatista insurgents. Women military commanders describe their experiences of the 1994 uprising, and insurgents discuss the challenges of clandestine organizing.  Participants explain the complex relationship between the liberation theology and the Zapatista movement, women’s struggles to rid communities of alcohol, the first above-ground organizing, the 1994 uprising, and the passage of the Women’s Revolutionary Law.

Chapters four and five address how women have changed power dynamics in Chiapas through struggles over land and militarization. Building on historical struggles for land, we see how women participated in the Zapatista land takeovers and current struggles against neoliberal land privatization policies.  We learn of the militarization, the failed San Andrés dialogues, and of confrontations with the military in their communities in 1998.

The remaining chapters, six through nine, reveal women’s experiences within the process and structures of the Zapatista movement.  “Women who give birth to new worlds” chronicles the evolution of women’s participation and leadership in the Zapatistas’ political structure, economic cooperatives, and regional gatherings, along with changes in the Zapatistas’ own gender analysis. “Zapatista Autonomy” describes a range of women’s experiences in the emerging autonomous systems: Good Government Councils, the community justice system, health care and education.  “Transformation and Evolution,”depicts the unevenness of changes in women’s rights and their ability to exercise those rights, acknowledging challenges and gaps between rhetoric and reality.  It also highlights new strategies, such as consciousness-raising with men, shifting expectations for men’s involvement in domestic work, and raising children with new gender ideas.  “Beyond Chiapas” shows efforts by Zapatista women to connect with women beyond Chiapas to build a broader movement for justice and dignity.

Maps, a timeline, glossary, and a list of suggested readings make this book an accessible introductory resource on the Zapatistas for students, organizers, and scholars. Throughout, Klein’s account reflects deep respect, comprehension, complexity, and nuance.  She combines systematic research, a genuine desire for the movement to achieve its goals, and the honesty to carefully examine its shortcomings.

Alicia Swords has conducted research with social movements in Chiapas, Mexico, the Dominican Republic, Chile and the United States. She teaches sociology at Ithaca College and works with the Committee on US-Latin America Relations (CUSLAR)