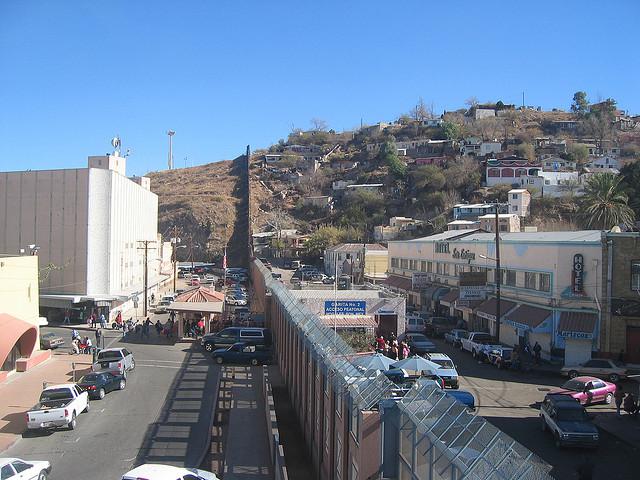 This article is a part of NACLA's "Border Wars" series.

“If you try to come to the United States, your deportation will be a priority.” This simple text, part of a U.S. government commercial, appears in Spanish over a faded image of the U.S. flag, moving into stills of fences topped with concertina wire and surveillance towers.

The commercial is only the most recent component of the Department of Homeland Security’s strategy to deter unauthorized migration to the United States: a series of TV, print, and radio advertisements in Central America and Mexico reminding the general public that they are not welcome in the U.S.

This seemingly simple message, when put in the context of the U.S. effort to export its border policing strategies southward, is actually a central component of a coercive strategy. The advertisements warn people of the dangers of migrating across international boundaries in an effort to convince them to not flee the violent situations at home and seek safety. In reality, the dangers of migrating were created by U.S. policy, a fact that DHS systematically ignores and obscures.

Since July 20, 2015, Customs and Border Protection (CBP)--an agency within DHS--has been airing the ads as part of the “Know the Facts” initiative. Featured in the ads are direct references to a rumor around ‘permisos.’ These are notices to appear in court given to migrants upon release from U.S. government custody, usually a detention center or children’s shelter. A key reason migrants come to the United States, suggests CBP, is because human-smugglers lie to them, telling them that the ‘permiso’ is actually a work permit that will allow them to stay. To dispel the rumor, the CBP has one thing to say: if you try to come to this country, you will be deported.

In light of the Obama administrations’s announcement (Nov. 2014) that it will de-prioritize the deportation of families, CBP wants potential migrants to know that this relief does not apply to them. Obama’s good news for established families in the United States means harsher measures for those intending to cross: immediate deportation, indefinite stays in detention centers, and even more walls and surveillance along the U.S.-Mexico boundary.

Since the mid-1990s, militarized border policing in the U.S. Southwest has caused many people to take more lengthy and riskier treks across the U.S.-Mexico divide, leading to many thousands of migrant deaths over the last two decades. In 2014 alone, authorities located 307 sets of bodily remains of migrants who perished crossing into the United States.

As part of the U.S. effort to control the boundary, particularly in relation to the “War on Drugs,” Washington has sent billions in military aid to Mexico via the so-called Merida Initiative since 2008. In addition, the U.S. government gave $112 million to Mexico for surveillance technology like night-vision goggles, helicopters, arms, and biometric tools to document facial, retinal, and fingerprint data of migrants crossing into Mexico from Central America.

This largesse aims to increase Mexico’s enrollment in U.S. international policing efforts. Mexico’s Programa Frontera Sur (Southern Border Program), initiated in July 2014, is a key component. It complements Washington’s “Know the Facts” campaign by trying to prevent the movement of people during the beginning of their journey through increased policing, before they even reach proximity to the United States.

Such efforts will do nothing to change the often life-threatening conditions that force people to leave their homes to try to reach the United States. Like the “Know the Facts” campaign, their greater significance lies in how they help to obscure Washington’s responsibility for the “crisis” it now polices. Instead of addressing how U.S. foreign policy contributes to the conditions that help drive people from their homelands, reforming the immigration system, or addressing the violence they experience at the hands of the U.S. government -- migrant deaths, detention, and the breaking up of families through deportation -- CBP effectively places the blame for the migrant crisis on rumors and human smugglers.

At the end of the ad, after DHS makes clear that unauthorized entrants will be deported, the narrator states in Spanish: “If someone tells or promises you something different, they’re fooling you. Don’t believe them.”

Even though this message is aimed at migrants, this is good advice for us in the United States in whose name the “Know the Facts” campaign is waged. In DHS’s effort to deny the quest of migrants to flee violence of various sorts that makes life in their homelands untenable and to realize lives of dignity in the United States, the agency and its spokespeople should not be believed.

David Orkin is an educator, writer, and potter based in Tucson, Arizona where he has worked with BorderLinks and No More Deaths/No Mas Muertes. You can follow him on twitter @_davidorkin_, contact him at david.orkin@gmail.com, or visit his website at www.davidorkin.com