Guatemala-U.S. Migration: Transforming Regions by Susanne Jonas and Nestor Rodríguez explores migration from Guatemala to the United States from the 1970s to the present. 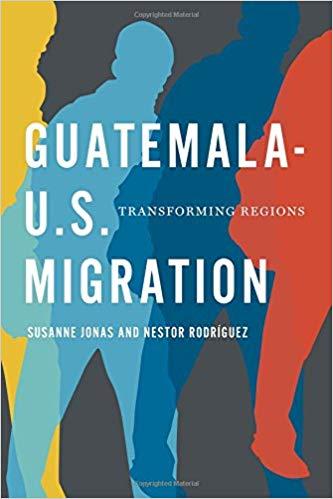 Jonas and Rodríguez provide an extremely timely, ground-breaking, and very well written account in this book of Guatemalan migration to the US, an issue dramatically highlighted by the 2014 influx of unaccompanied minors from Central America. The shift in migration - in 2014 for the first time, Central Americans (with a large portion Guatemalans) displaced Mexicans as the largest group apprehended by the U.S. Border Patrol – makes this book particularly timely.

The authors takes us far beyond the latest headlines in the first book-length study addressing Guatemalan migration to the US as a national, rather than community-specific, phenomenon. They stress the importance of space and place in the migration process, the larger political economy, state policies, and organizations, and the human agency of migrants in their struggles to survive and change their lives.

Jonas and Rodriguez are a formidable, complementary team of scholars, each with nearly thirty years of research and writing on both Guatemala and Guatemalan migration, which facilitates a real dual focus on both countries-- as well as a third focus on Mexico, the key transit country. They present a rich, detailed overview of the social, political, economic, military-conflict context in Guatemala that created the violence-ridden “push conditions” that first compelled mass migration north starting in the late 1970s – a background emphasis that is sadly rare in migration studies – as well as the changing US economic conditions that “pulled” migrants here (e.g.,  increasing low-wage labor demand in a an ever-more polarized, service-based restructured economy) and the shifting, often byzantine and ever more punitive US migration policies.

The authors divide Guatemala-U.S. migration into five phases, the first being “Fleeing Social Turmoil” from 1977-1985, (pg. 34) fueled by the most severe political violence by government forces (with US assistance) during the decades-long civil war, with this “political generation” (pg. 13) shaping the ensuing four migration phases. Ultimately, the authors note that many of the 1980s political asylum applicants from Guatemala (and El Salvador), who were so overwhelmingly rejected by the Reagan Administration, did get a chance to reapply in the 1990s and beyond (due to landmark court cases). This effectively granted at least temporary legal status, while several tens of thousands of these early migrants gained permanent legal status under the Immigration and Reform and Control Act of 1986. However, many more migrants remained undocumented, in part because Guatemalans never received the “temporary protective status” that Salvadorans and Hondurans did, despite a lengthy advocacy campaign by Guatemalan migrants and their allies.

On the US side, Jonas and Rodriguez contrast two US destination cities, Houston and San Francisco, mapping out how Guatemalan migrants adjusted, as well as how both cities have been profoundly affected by the newcomers. They carefully detail the economic restructuring that has created greater “pull conditions”, most often into often lower-paying portion of the ever more polarized neo-liberal US economy.  In each city, the authors show how migrants transform particular space into a place with meaning and home for themselves.

In Houston, communities of mainly Mayan Guatemalan migrants have done remarkably well, with early settlers able to secure affordable housing due to a local housing market collapse after 1982 provoked by a bust in oil prices in this very petroleum-dependent city. More crucially, early Maya settlers found a viable economic niche in relatively well-paying, stable employment in a prosperous super market chain, coming to monopolize some maintenance occupations through strong social network recruitment and leadership. And finally many were active in Spanish-speaking evangelical Protestant churches that helped provide social ties and support, particularly for women, while immigrant recreational soccer leagues served the same role for men.

Interestingly, many indigenous Mayan migrants to Houston developed their Guatemalan identity more fully over time, while still also identifying as Maya – not unlike impoverished Sicilian migrants who became Italians when they migrated to the U.S. in the early twentieth century. These combined factors enabled the formation of stable Mayan communities in specific neighborhoods, and laid an important foundation for future Guatemalan immigrants. However, these advantages declined over time largely due to changes in state policy, as legal status adjustment options dwindled and immigration enforcement measures became ever more expansive (limiting job options and heightening the risk of deportations).

In contrast, Guatemalan migrants in San Francisco were more Ladino than Maya and faced a difficult context of less affordable, accessible housing (and displacement via gentrification) as well as lower paying jobs, though there were extensive legal assistance resources for asylum applicants and a generally more sympathetic political climate. The authors focus mainly on Guatemalan migrants in the famous Mission District, long the site of greatest Latino population concentration and cultural presence in the city. While a “ ‘little Central America’ ” (pg. 163) developed here, Guatemalans were never able to form the same sort of cohesive communities as in Houston, but rather were one strand of the broader Latino immigrant community – in which Mexicans and Salvadorans were more prominent (as they were in Houston, too). Rather, as one long-term Guatemalan resident termed it, a “comunidad fragmentada” [fragmented community] (pg. 186) developed, cross cut by ethnicity, class, and gender, and differences in political ideology.

However, religious affiliation remained important for many, as the local Roman Catholic parish church was especially supportive from the beginning of the sanctuary movement in the early 1980’s. On the whole, San Francisco’s progressive politics were more welcoming for Central American immigrants (as one of the first “sanctuary cities”) and their political activism (among the relatively few activists), but the local economic policies were more skewed toward upper income real estate development, technology and finance sectors, leaving low paid service work as well as construction work (though the good-paying variety not as accessible). Still migrants helped shape local cultural life as well as build the local economy with small businesses, labor, and purchases, but ultimately many were displaced due to rising housing costs, and stepped-up immigration enforcement which resulted in increased deportations. The authors give special attention to the local political struggles, leadership, and organizations involving Guatemalan and other Latino migrants in this dynamic adjustment and settlement process.

Beyond these detailed case studies, Jonas and Rodriguez devote a refreshing chapter to organizing for migrant rights with an emphasis on the human agency of migrants as well as a very helpful regional focus on the US, Guatemala, and Mexico as a cohesive “migration region” (page 11). The authors provide a great deal of detail on the largely ignored history of Guatemalan migrant advocacy and agency, as it extended through fits and starts, in all three counties. They describe regional efforts, starting with the 1980s sanctuary movement, and covering the burst of Guatemalan migrant advocacy in the 1990s and early 2000s, particularly after the Civil War ended in 1996. They review US immigration policies and their increasing restrictive nature, which left so little room for Guatemalan migrants to gain legal status. The authors also develop more fully their concept of a “migration region” ranging from Guatemala and the two other “Northern Triangle” nations (El Salvador and Honduras) through Mexico and in the U.S., whereby migrants and regional social actors (e.g., migration authorities, human rights advocates, local businesses, transportation systems, employers, etc.) have been affected and reshaped the region.

This notion of a trans-regional migration space is among their most innovative insights, linking sending communities (transformed by migrant absences as well as remittances) to Mexican migrant corridors to US receiving communities. This is especially relevant in examining the recent increase in unaccompanied minors (and families). Jonas and Rodriguez attribute this in large part to continuing adverse structural conditions in the sending countries, growing violence often rooted in criminal enterprises (drug, gangs, etc.) and weak and corrupt governments – typically aided by highly militarized and spectacularly ineffective US security assistance (the “mano dura” [heavy hand] approach).

This stands in marked contrast to similarly impoverished regional neighbor Nicaragua which has taken a very successful, decidedly non-coercive and youth-and-family-oriented violence prevention approach that has resulted in drastically lower rates of violence and very little migration of minors north.  Of course, Nicaragua had a transformative revolution in the 1980s whose lasting consequences include the remaking of the police and security systems. It still lies outside the dominant US geo-political orbit and its draconian and ironically insecure, coercive approach to regional security.

Jonas and Rodriguez conclude that the state/governments in Central American nations as well as Mexico have weakened under regional “free trade” agreements which reduce the state’s regulatory purview of capital as well as creating space for rising criminality. However, the state holds much sway over the movement of people and here migrant advocacy networks, though weak, have brought in an important normative, moral dimension that has made a real difference in some policies and in the lives of migrants.

Migrants exercise agency in important ways, from deciding to migrate out of desperate conditions to building better living and working conditions in the US to clamoring to change migration policies to practicing cultural expressions and creating organizations in new communities. This in turn has affected the social structure in ways large and small as the larger immigration process reshapes communities across the US. Jonas and Rodríguez have made an outstanding scholarly contribution to our understanding of these issues in a book that deserves a wide readership and discussion.

Timothy Dunn is a Professor in the Department of Sociology at Salisbury University in Maryland.