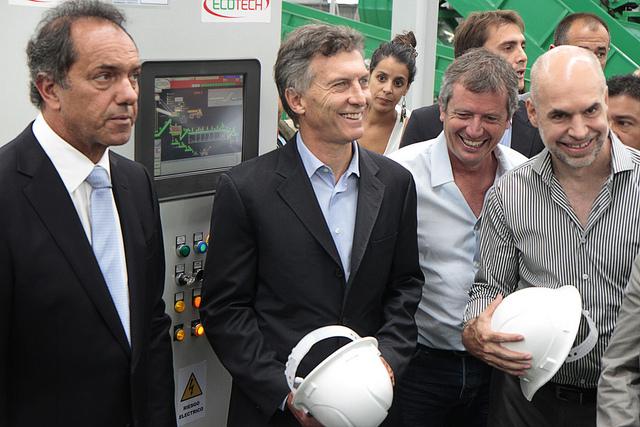 For a country with no government ministry dedicated to the environment, it should come as little surprise that Argentina’s presidential hopefuls are not prioritizing the issue ahead of first-round elections later this month. While corruption, security and a shaky economy top the electorate’s concerns, environment remains the principal concern of only a minority of voters, according to Andrés López, director of Buenos Aires-based sustainable development think-tank CENIT.

Inflation, a budget deficit of nearly US$ 2billion and the need to address the fractious relationship with international capital markets since the 2002 default are high on the economic agenda. Argentina’s national Institute of Statistics (INDEC) puts the annual rate of inflation at around 13.3% but independent estimates suggest the real rate could be twice as high.

Leading presidential candidates Daniel Scioli, of President Cristina Kirchner’s Victory Front, Mauricio Macri of the center-right Propuesta Argentina (PRO) and Sergio Massa of the Peronist Renewal Front have all pledged to create an environment ministry if elected. But despite signalling a supposed serious commitment to environmental policy, the promise would merely bring Argentina in line with the rest of the region. “Environment is a non-issue,” continues Andrés López, who adds that it tends to influence only local level politics in Argentina.

Even the Pope’s impassioned encyclical on climate change has failed to resonate with voters in his native country, Blanco says, adding that there is a big difference in the pontiff’s ability to influence those who call themselves Catholics and those who actually practice the religion. The Church’s influence in Argentina has waned since the 1980s and confrontations with outgoing President Kirchner have done little to reengage the substantial number of leftist voters.

Arguably the most significant environmental pledge so far has come from Scioli, the comfortable winner of primaries held in August. Scioli promised that environment will be central to state policy under his regime. But the election will not be won or lost on such promises, says Daniel Ryan, research director at environmental NGO FARN.

“There is a paradox in Argentines’ attitudes towards environment that is reflected in surveys,” says Ryan, explaining that around 70% of Argentines think the environment is important, but it doesn’t feature among their policy priorities when ranked alongside other issues. Hence candidates’ declarations on environment are often unspecific and indistinguishable from each other, Ryan argues.

But the story is different around the sites of Argentina’s big extractive and infrastructure projects, which have both environmental and political impacts. Government plans to increase the country’s energy capacity by 5% by building two major dams in Patagonia with Chinese financing have outraged environmentalists, who claim the projects could threaten the iconic Perrito Moreno glacier.

China is playing a major role in the development of Argentina’s energy infrastructure and the two governments signed a series of deals in February this year including agreements on nuclear energy and hydropower. But bilateral cooperation has yielded comparatively little progress on non-hydro renewables (which include wind, solar, biomass, geothermal, landfill gas, and municipal solid waste) so far. A study released by CENIT earlier this year revealed that Chinese trade and foreign direct investment (FDI) in Argentina remains firmly focused on high carbon-emitting sectors such as oil, gas and agriculture. While Scioli has also pledged to make Argentina “a leading country in renewable energy”, experts predict few major changes to the country’s energy matrix under an administration run by Scioli, or anyone else.

Primaries runner up from the Propuesta Argentina, Mauricio Macri, differs little from Scioli who has promised to increase the share of renewables from the current 1.5% to between 8 and 12% by 2030.  Macri pledges to reach 10% in a shorter timeframe (by 2020), his top environmental advisor recently told the Buenos Aires Herald.

But making Argentina’s energy matrix greener would require a major overhaul of the sector. Oil and natural gas alone are currently responsible for well over 80% of Argentina’s total primary energy supply. The Latin American regional average is around 66%. Argentina's national climate plan, submitted to the UN this week, was criticized by Cali Villalonga, head of Buenos Aires' Environmental Protection Agency for its lack of ambition and for failing to commit to reducing emissions from the energy sector beyond existing renewables projects.

According to Blanco, any investment in expanding non-hydro renewables will be local and driven by the private sector rather than the state. Blanco adds that the emphasis on non-renewables is likely to continue given the anticipated shale bonanza from the Vaca Muerta field in southwestern Neuquén province – the largest proven shale oil and gas reserves in the world outside the US.

Scioli recently announced his withdrawal from Argentina’s first-ever televised presidential debate, which took place at the University of Buenos Aires (UBA) on October 4. But even if he had participated, it would have revealed little about his, or his rivals’ green credentials, as none of the debate’s four thematic ‘sections’ focus on the environment or climate change. Human and economic development, education, security and human rights and strengthening democracy topped the agenda with an additional and unrehearsed “multi-thematic” question and answer section. There was but one solitary mention of environment, from social democrat outsider Margarita Stolbizer, and no reference to climate change.

In consultations with the media over several months, more than 30 civic organizations determined the debate topics, said Hernán Charosky, coordinator at Argentina Debate. “We want candidates to present their diagnoses and proposals on the issues fundamental to Argentina’s future, and which interest the electorate,” said Charosky.

But Daniel Ryan and other environmentalists would have liked a proper discussion on the environment. Ryan argues that it is vital to generate more media attention on the subject. “It would force candidates to assume firmer positions,” he says.

Robert Soutar holds an MSc in Comparative Politics from the London School of Economics and Political Science. He is managing editor of Diálogo Chino which focuses on the social and environmental impacts of China’s relationship with Latin America.