Guatemala's President-elect Jimmy Morales, despite campaigning as the antithesis of a career politician, is backed by the same forces that carried out some of the worst crimes in the country's history. 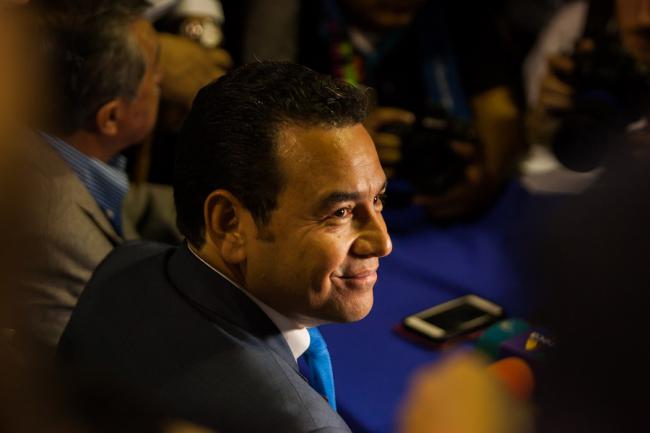 It is almost a bad joke: Jimmy Morales, a former TV comedian, famous for having once played a campesino who accidentally became president and well known for performing in blackface, has won the presidency of Guatemala. The October 25 run-off election wasn’t even close, as Morales, running under the banner of the tiny National Convergence Front (FCN) party, captured nearly 70 percent of the vote.

Morales had campaigned as an outsider candidate, the antithesis of a career politician. His campaign slogan, “not corrupt or a thief,” looked to ease voters’ minds following the revelation of a massive corruption scandal within the administration of ex-general Otto Pérez Molina. But unbeknownst to many Guatemalans, their new president’s backers represent the same forces that carried out some of the worst crimes of the country’s 36-year-long internal armed conflict.

In fact, the FCN was founded by the same military interests that cast shadows over Pérez Molina’s cabinet. Retired Generals Jose Luis Quilo Ayuso and Luis Felipe Miranda Trejo, from the Association of Military Veterans of Guatemala (AVEMILGUA), founded the party in 2004 to rebuild the prestige and respect for the military that they felt had been tarnished since the signing of the peace accords in 1996, and to represent the nationalistic interests of the Guatemalan military.

Both founders were deeply involved in the government’s counterinsurgency campaign against Marxist guerillas during the 1980s— a campaign which Guatemala’s United Nations-backed truth commission, the Historic Clarification Commission (CEH), called genocide. Miranda Trejo served as chief of intelligence at Military Base 21 in Cobán from 1979 to 1983, during which time hundreds of men, women, and children were buried in clandestine graves at the base. In this same period, Quilo Ayuso received training in Argentina, before returning to Guatemala in 1983 to take command of the Second Battalion in the department of El Quiche.

It is worth nothing that in addition to “restoring dignity” to the military, Morales’ party was also formed to protect Guatemala’s armed forces. “In 2004, there were criminal prosecutions against retired military,” Quilo Ayuso told the Guatemalan investigative website Plaza Pública. “We intended through political means to stop these prosecutions. War, internal armed conflict, these are now legal situations, as well as a political issues.”

Although Quilo Ayuso and Trejido Miranda claim they are no longer a part of the FCN, according to a report from the Guatemalan daily newspaper La Hora, Quilo Ayuso continues to finance the party.

Jimmy Morales’s “right-hand man,” Edgar Justino Ovalle Maldonado, is another retired coronel who was highly involved in the counterinsurgency. Ovalle Maldonado was listed as a member of the FCN’s Executive Committee in 2011. He also recruited Morales to the FCN after a failed run for mayor of the municipality of Mixco.

What’s more, both Quilo Ayuso and Ovalle Maldonado spent several years training at the notorious School of the Americas in Ft. Benning, Georgia. Ovalle Maldonado spent 1973 specifically studying counterinsurgency there, and on two subsequent training missions he traveled to Colombia for further training. In September 1981, Ovalle Maldonado was deployed as an operations officer for the Ixil Task Force in the western highlands of Guatemala. In that year and those that followed, the Guatemalan military’s genocide against the indigenous Ixil Mayans reached its climax.

Between July 1981 and December 1982, the military massacred civilian populations in the Ixil Triangle. In 415 separate incidents, tens of thousands of people are believed to have to been killed while hundreds of towns and villages were destroyed.

Declassified CIA cables from the early 1980s highlight the military’s scorched earth campaign against civilian populations in the Ixil Triangle, where Ovalle Maldonado was a commander. “Commanding officers of the units involved have been instructed to destroy all towns and villages which are cooperating with the Guerrilla Army of the Poor (EGP), and eliminate all sources of resistance,” the CIA stated in a February 1982 cable. But, as the cable also notes, the army had “yet to encounter any major guerrilla force in the area” at the time of mission.

The February 1982 CIA cable also writes of the “well-documented belief by the army that the entire Ixil population is pro-EGP [guerrilla],” adding that this belief has “created a situation in which the army can be expected to give no quarter to combatants and non-combatants alike.”  Their reasoning was simple: because of the civilians’ ethnicity, the Guatemalan high command considered them to be the internal enemy.

In 1983, as the Ixil Triangle campaign against the indigenous Q’eqchi began to wind down, Ovalle Maldonado was transferred to special operations in the municipality of Cobán.

Today, these are the men supporting Guatemala’s new president. In an interview with VICE News, a leader of the Ixil Indigenous Authority commented that Jimmy Morales was “the figure for all the ex-generals from the war.” According to the community leader, Morales represents “the continuation of the administration of Otto Pérez Molina,” even if “the majority of people don't understand this connection.”

These shadowy figures from the past seek to continue the culture of impunity that has reigned supreme in Guatemala for centuries. Their return to power in the form of Morales threatens to derail any attempt to hold the old guard of military officials responsible for the crimes and genocide they committed against Guatemala’s Mayan people.

Despite Morales’ claims that he is defying Guatemala’s political status quo, he now echoes the party line, and has even gone so far as to deny, on a number of occasions, that the genocide ever happened.

Today, abuses and impunity continue through conflicts over the expansion of mega-projects across Guatemala, and through the criminalization and prosecution of the leaders of the country’s social movements. The Morales victory will not change that situation. Under its new President-elect, Guatemala is likely to see not only the further disruption of human rights trials of former military leaders, but a deepening criminalization of indigenous movements who seek to defend their lands against the expansion of extractive projects in the areas of mining, hydro-electricity development, and monoculture agriculture.

The Morales administration will come under intense scrutiny both by civil society who participated in the nearly five months of protests leading to Peréz Molina’s resignation, and multilateral anti-corruption bodies such as the International Commission against Impunity in Guatemala (CICIG), who have uncovered multi-million dollar corruption cases involving the highest seats of government. The massive mobilization of civil society signals that the population will not hesitate to return to the streets in protest at the first signs of corruption in the new administration.

Jeff Abbott is an independent journalist currently based out of Guatemala. He has covered human rights and social moments in Central America and Mexico. His work has appeared at VICE News, Truthout, and Upside Down World. Follow him on twitter @palabrasdeabajo.