Criminals or Citizens? Mining and Citizen Protest in Correa’s Ecuador

Despite Ecuador's lofty goals of environmental justice and social equity, the state is repressing and criminalizing the voices of anti-mining protesters. 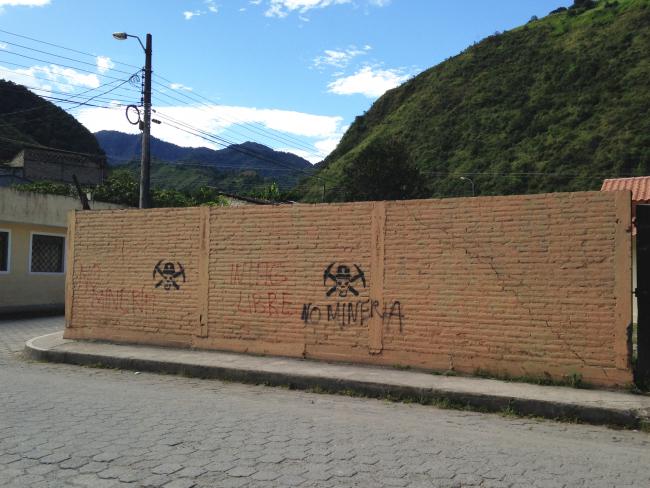 Correísmo, President Rafael Correa’s particular brand of Latin American “post-neoliberal” populism, has developed a reputation for saying one thing, doing another, and criminalizing those who point out the difference. The criminalization of protest, together with state-led resource extraction, contradicts the socially minded programs of Ecuador’s 2008 Constitution. While Correa pushed for the creation of state industries to combat exploitation by multinational corporations, the development of state-owned economic enterprises is yielding a less egalitarian model than promised. Increasingly, these state industries act like foreign firms. Nowhere is this more apparent than in the way the state has marked protestors – or even those simply seeking transparency – as criminals.

According to a report by the Defensoría del Pueblo de Ecuador (2011), criminalization of protest takes two forms in Ecuador. On the one hand, the state has launched attacks against individuals. This overt criminalization has been well documented. For example, movement leaders like Javier Ramírez, who led his community of Junín against the opening of a copper mining project in the Llurimagua concession, have been incarcerated on dubious charges. President Correa has also become well known for calling environmentalists “infantile,” “romantics,” and even “terrorists.” These now emblematic cases of criminalization have been the subject of much national and international attention.

On the other hand, criminalization has become institutionalized – codified in state law and characterized by any perceived threat to the state. In 2009, for example, the state temporarily closed the well-known environmental organization, Accíon Ecológica, punishing the organization for critiques of the government and its role in anti-mining protests. Only later did state officials argue that the organization was working beyond the scope of its mission and charter. The Correa government has also argued that the organization did not register with the Ministry of Environment despite the fact the Ministry did not exist when Accíon Ecológica was founded.

Then, in 2013, Correa’s government shut down another environmental and human rights organization, Fundación Pachamama, on charges of endangering public peace and state security. The non-profit had highlighted the environmental and human rights impacts of the oil industry in Ecuador, interfering in a new round of state-led oil bids. Because of limited international interest in the new oil blocks, the state was able to blame Fundación Pachamama. While individual cases draw more international attention, the day-to-day effects of the state’s institutional processes have been less explored.

The Llurimagua copper concession that encompasses Junín (a campesino community of about 270 people) is a case in point of institutional processes of criminalization. Junín is a longtime locus of grassroots resistance to corporate mining interests. In the 1990s, its residents prevented extraction efforts by several multinationals through a variety of creative protest strategies. More recently, though, the presence of the state through an aggressive mining company has reshaped social relationships at the local level in Junín. In April 2014, 300 national police accompanied the state mining company ENAMI’s entrance into the community to quell protest. During this period of occupation, Javier Ramírez, the former president of Junín, was accused of injuring mining employees during anti-mining protests. Returning from Quito several days after these protests, following a meeting with state officials to discuss the mining project, police stopped Ramírez’s bus. The community leader was pulled off, detained, and subsequently jailed for 10 months. Only later were charges of rebelión brought against him. His brother, also accused by the state of participating in protests, remains in hiding. Community members and Ramírez’s employer, a Belgian doctor who owns a coffee farm in Junín, publicly stated that Ramírez was home recovering from a motorcycle accident during the alleged rebelión. Yet, the state refused to allow this testimony in court – proof that as criminalization is codified through state jurisdiction, its impacts and effects extend far beyond the rule of the law.

When Ramírez was in jail in 2014, the state pressured Junín to force elections for a new local government. Pro- and anti-mining groups mobilized in preparation for the community meeting before the vote. Divisions in Junín were so stark that two local governments, or cabildos, emerged. One was firmly anti-mining, while the other, backed by ENAMI, represented pro-mining interests. The company’s cabildo often approved community decisions about ENAMI’s access, ensuring the company had “community support” for its actions.

Though state industries were built to combat foreign exploitation, the atmosphere of militarization around the mine gives off the impression that the state is combatting ordinary citizens. 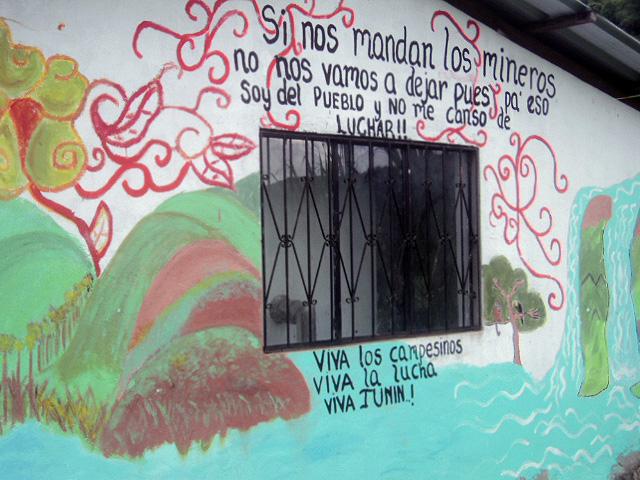 Ramírez’s full sentence was 12 months, but in July 2015, following an appeals hearing in Quito, the court allowed Ramírez to remain at home rather than serve the remainder of his sentence. In Junín, Ramírez returned to his daily routine, picking, cleaning, and drying coffee. Despite his low-key and friendly demeanor, he is quick to critique the state. While Ramírez now chooses to be less publicly vocal, unwilling to put his family through the stress and heartbreak of the previous months, he remains the face of the movement. Large banners with his image and the words ‘No a la minería’ plastered in large print across them continue to hang outside his home.

Unlike Ramírez, ENAMI was not forced to withdraw; in fact, its presence in Junín is more powerful than ever. Nowhere is this presence in the community clearer than in ENAMI’s current exploratory efforts in Junín’s eco-reserve, along with Chilean state mining company CODELCO. The centerpiece of this eco-reserve is a trail system that allows for tourist access to spectacular waterfalls. Now, mining exploration has opened these trails to mules carrying drilling tools. The eco-reserve encompasses privately held community land. ENAMI has not necessarily compensated these landholders for its access, nor has it definitively received the necessary legal permission to enter this territory. Reduced to mud almost a foot deep, access to the reserve is now virtually impossible.

On a recent trip to the reserve, we climbed to the mining access point. One trail led to the waterfalls, the other – now blocked by two workers – led to the mine. “Nobody passes without company permission,” the workers informed us. On prior attempts, the company had only demanded safety gear. Though we had now come with vests and hardhats, they still refused. As we stood there, a mule train arrived, led by a community member working for the company. No vest, no hard hat, but the mules and their driver passed by.

By the time we followed the trail back down out of the eco-reserve, three members of the national police were there waiting for us. “We’re here to keep the peace between the ecologistas and mineros,” they commented as we passed. They were worried about where we had gone, about our interactions and intentions. Our community guide urged us to continue, and to not interact with the police. He was nervous about our questions. Further down the trail, another two policemen waited, ensuring we all exited the mining zone.

Discipline and control through ENAMI and the police are palpable in Junín. As one community member said, “ENAMI is putting their laws into action, and that makes them powerful. They’re going to put in a rótulo (sign) that says property of ENAMI. It’s aggressive.” Here an antagonistic firm locally enacts the supposedly benevolent Ecuadorian state. The rights of citizens as part of the nation are transferred to ENAMI, now embodying and claiming state authority to enter the community at will.

Community members know that the company and the police monitor their daily movements. When the national police arrived in Junín in 2014 to ensure the company could begin operations, residents were asked for identification and required to inform the police of their daily actions. Those engaged in anti-mining protests were treated more harshly than those who were not. While these disciplinary techniques have not continued to the same extent, their effects are still apparent. It has become easier to stay inside, keep to oneself, and end relationships with neighbors with whom one has political disagreements, rather than risk engagement with the police or company.  As another community member said of the mining company, “They continue watching us; ENAMI is like an observer.”

Yet the story of criminalization of protestors by the state is never simple. Even those who once opposed the mine, now wearied by struggle, sometimes seek employment that supports its projects. A local restaurant run by a collective of local women prepares food for miners. Other families are now renting housing to workers. None of these jobs are guaranteed beyond this phase of the project. If the mine is constructed, Junín will be relocated. Some community members, recognizing the impermanence of this newfound employment, hope to invest their money in property, or fund their children’s education. According to state rhetoric, this is progress and development.

In all cases, however, the options are few: protest and confront criminalization, or acquiesce and try to find uncertain employment. The end result is silence.

Emily Billo is Assistant Professor of Environmental Studies at Goucher College. Her research on resource extraction in Ecuador has appeared in the journals Geoforum and Gender, Place, and Culture.