Two years ago, Haiti's presidential frontrunner Jovenel Moïse displaced hundreds of farmers to build an exporting banana plantation. It's an omen of things to come. 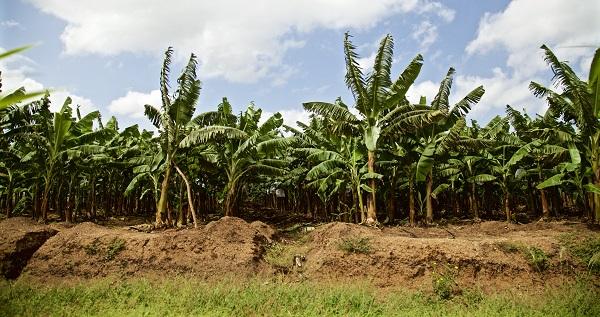 A version of this piece originally appeared in Upside Down World.

Two years ago, Jovenel Moïse, the only man running in Haiti’s fraudulent presidential election run-offs this Sunday, dispossessed as many as 800 peasants and destroyed houses and crops, according to farmers’ associations leaders in the Trou-du-Nord zone. Those affected farmers, who had been farming the land legally, remain homeless and out of work.  In its place is a private banana plantation owned by Moïse’s company, Agritrans.

Agritrans received at least $6 million in state loans, and possibly much more, to grow bananas for export in the hungry nation. Agritrans seized a 1,000-hectare (2,371-acre) tract from farmers, bulldozed their houses and fields, used bribes to buy local support, distorted claims of its benefit to local residents, and created a phantom organization to legitimate itself.

In order to run, Moïse stepped down as the head of Agritrans last year, though he is still campaigning under the moniker Nèg Bannann, or “The Banana Man.” He portrays himself as an entrepreneur determined to transform Haiti’s agricultural sector into private enterprise. If he becomes president, the company Moïse created would likely foster further loss of domestic food production and family livelihoods.

Moïse hails from the political party of the current president Michel Martelly, whose principal platform has been “Haiti: Open for Business.” Martelly himself came into office in 2011 through an election mired in chaos, backed – like the current one – by the US. Secretary of State and the OAS. In 2011, Hillary Clinton played a pivotal role in imposing Martelly.

Moïse will be the only candidate to appear on the run-off election’s presidential ballot. The only other candidate posed to run, Jude Celestin, refused to participate, calling the process “a farce… [of] selections.”

A Moïse presidency would ensure that political decisions prioritize free trade and private enterprise over support for the destitute majority. This, in turn, would likely give a green light to massive land grabs that are planned or in process, leading to further dispossession of peasants working the land.

The August 2013 expulsion of hundreds of farmers forced out hundreds of farmers who were legally using the land.  Local leader Milosten Castin, coordinator of the organization Action to Reforest and Defend the Environment, said that, with no warning, several bulldozers invaded the land, plowing under crops and forage used for grazing. The machines later destroyed the homes of at least 17 families, many of whom remain homeless today.

After protests organized by the Peasant Movement for the Development of Deveren (MPDD), Agritrans gave the owners of the destroyed homes between $40 and $700 each in compensation. Gilles St. Pierre, a member of MPDD who lost his concrete block house, said the compensation was inadequate. “What am I supposed to do with 700 dollars?” he asked in a phone interview last week. “I had a house and land… and now I work as a taxi driver.”

The Agritrans plantation is the first agricultural free trade zone in the country, established by the Ministry of Commerce and Industry. This allows the company to take advantage of perks of reduced tax and tariff payments, along with special customs treatment. By Haitian law, free trade zones must export at least 70% of their products. Currently, Agritrans’ production - an estimated 40 containers of bananas weekly – is shipped to Germany.  At the same time, Haiti does not produce enough food to feed itself. Destitute Haitians must rely on imported staples, whose costs are expected to rise this year.

The irony of shipping food to Europe was not lost on one woman whose land was seized. Asking to remain anonymous for fear of retribution, she said, “They’re sending bananas overseas, and now we have to go to the border to buy Dominican bananas and plantains… It doesn’t make sense.”

Another land grab may be imminent. In order to comply with the contract with its German clients, Agritrans must ramp up production within the next three years in order to ship 150 containers, equaling 160,000 tons, to Germany each week. According the current CEO of Agritrans, Pierre-Richard Joseph, this increase will require 3,000 more hectares of land.

One of the main demands of peasant groups in the region, like their counterparts around Haiti, is food sovereignty, which would allow the people to democratically control the production of food to meet the needs of their country through local, ecological, and small-scale agriculture.  Another demand is government support for family farming, including access to land, water, and markets.

“Haitian agriculture is based on peasant farms,” said Castin. The World Bank estimates that 80% of Haiti’s rural population is engaged in small-scale agriculture. “Any plan must support their mode of [growing],” he said. “That’s what will change this country.”

Moïse described the land in question as “abandoned,” and also stated that Haiti has over one million hectares of land “that is being used for nothing.” Local peasant groups disagree.  They argue that prior to Agritrans’ takeover of the 1,000 hectares, the semi-arid land was actively used by peasants, despite the limited resources available to them. Peasant organizations and individual farmers were grazing cattle on it, and selling the milk to NGOs and small-scale milk and yogurt processors. Other farmers grew crops like millet, cassava, corn, beans, and sweet potatoes, both to feed their families and sell on the local market.

Now that the land is held by Agritrans with millions of dollars in state loans invested in it, row upon row of lush banana trees grow, irrigated by pumping groundwater. The transformation reveals a fundamentally political question: If the land had the capacity to become so productive, why didn’t the government support peasant farmers to make it so, instead of providing massive support to private interests?

A woman living near the banana plantation stated, requesting anonymity, “The government builds roads,” so “they could easily build water reservoirs and irrigation canals. But they don’t.”

In his campaign, Moïse has cited the banana plantation in his campaign as evidence of his ability to create much-needed jobs in a country where only 13% of its people are formally employed. Agritrans says it will create 3,000 desperately needed jobs once the plantation reaches it full capacity, in turn propelling the local economy.

As of March 2015, only 600 jobs had been created, including for agronomists, engineers, agricultural technicians, and farm laborers. However, according to interviews with some of those laborers, “jobs” on the seized land are only offered in 15-day shifts. This creates both precarious, short-term jobs for families and misleading employment figures.

Workers are paid the minimum wage of 200 gourdes (US$3.53) per day, plus a plate of food — an amount which Haitian workers and other organizations, as well as some prominent factory owners, say cannot support a household. The minimum wage covers just 19-37% of the cost of living in Haiti.

Moïse has claimed that smallholding farmers are included in the banana business, as they provide labor as well as hold a 20% minority share in the business. He cited the so-called Peasant Federation of Pizans (FEPAP) to back this claim. Although Moïse said that FEPAP was made up of a consortium of eight local peasant farmer associations, according to leaders active around the plantation area, this claim is false. In an interview, Josaphat Antoneus, coordinator of a peasant coalition, agreed. “FEPAP is a phantom organization,” he said. “Peasant inclusion in the business is a facade [Agritrans] wants to give at the global level.”

Castin claims that the so-called peasant groups that make up FEPAP “were active back in 1980s. Maybe they still have a president, or a secretary, but they have no members today.” Even so, the organizations that allegedly comprise the confederation of FEPAP had legal access to only approximately 100 hectares prior to Agritrans’ take-over. When asked about FEPAP’s 20% shareholder status, Castin laughed. “Twenty percent of what? No one in FEPAP is in Agritrans’ administration; they don’t know what the profits are.”

Ben St. Jacques, an activist with a community organization in the area, claimed that Agritrans bribed peasants to support the project, offering motorcycles and televisions to FEPAP members.

According to residents, most of those who found employment with Agritrans had never before had access to the land. Conversely, most of those who had worked the land before being kicked off, and who had protested their eviction, never found wage-work on the plantation.

For Gilles St. Pierre, who lost his home to the plantation, while the January 24 single-candidate presidential run-off itself is a farce, its outcome is deadly serious. “If Jovenel [Moïse] is elected, he’ll have the same people around him, and he’ll do the same thing again. It will be a disaster for small farmers, even those with legal rights to the land.”

“If Jovenel becomes president,” he said, “this country is finished.”

Joshua Steckley is a research and freelance videographer who has spent over five years living in Haiti. Beverly Bell, coordinator of Other Worlds, is an organizer and writer who has worked with social movements in Haiti for 35 years. Natalie Miller, Other Worlds’ Media and Education Coordinator, also helped with this article.