Why is it so easy to find funding to stop people at the border, and so hard to convince lawmakers to invest in long-term changes? 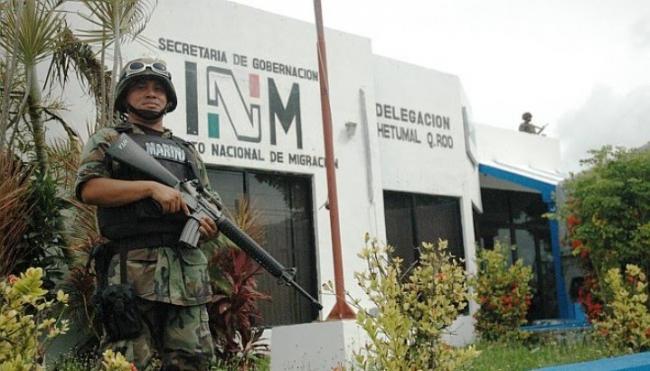 On February 24, representatives from Honduras, El Salvador and Guatemala will meet with Vice President Biden in Washington to discuss the past and future of the Alliance for Prosperity, a multi-year U.S. aid package to Central America. This meeting comes in the wake of the release of the State Department’s 2017 foreign budget justification, which outlines President Obama’s plan for foreign funding over the next year.

Around this time last year, the Obama Administration proposed a $1 billion aid package, which called for an increase in U.S. aid in response to the unaccompanied child migrant crisis. The proposal initially promised an unprecedented proportion of aid for development purposes ($540 million), but over the course of a year was reduced and watered-down, with the House and Senate eventually cutting development and economic assistance from the package and going above and beyond Obama’s request for defense and counterdrug spending. It wasn’t until mid-January 2016, a year and a half after the child migrant crisis made headlines, that the U.S. government announced any special plan to protect Central American migrants. As of November 2015, only six Central American children of about 5,000 applicants had arrived in the U.S. with legal refugee status.

While proposals for social and economic aid to address the problems of citizen insecurity and lack of opportunity in Central America have faced significant obstacles, it was easy to find guns and interdiction technology for Mexico’s Southern border. Congress responded quickly to keep Central American migrants from ever reaching the U.S.-Mexico border, where they are legally required to receive a trial. In 2015, the U.S. provided extra $79 million over Obama’s proposal to secure Mexico’s southern border through the U.S.-Mexico Mérida Initiative. This spending anticipated Plan Frontera Sur, a Mexican effort to control the flow of Central American migrants traveling through Mexico, mirroring the militarization of Mexico’s border to the north. U.S. and Mexican migration officials deny that the U.S. has funded Frontera Sur itself, but it has become increasingly clear that the U.S. promoted the program through significant equipment donations and technical assistance.

For the past eight years, the majority of U.S. funding to Central America, through the Central American Regional Security Initiative (CARSI) and the Alliance for Prosperity, has been dedicated to military and police aid, especially anti-narcotics programs. CARSI prioritized the goals of the War on Drugs over those of protecting the people of Guatemala, El Salvador, and Honduras. The abuses carried out by CARSI-funded “elite” military and police forces in Honduras and El Salvador have been widely documented.

In El Salvador, specifically, the U.S. has applauded programs like “Mano Dura,” which promised to destroy gangs but instead resulted in those same gangs adopting more sophisticated and diversified funding schemes. In 2012, the U.S. also refused to support attempts at gang reconciliation, a failure that has been interpreted as one of the driving factors behind El Salvador’s alarming murder rate. A much smaller proportion of funding has been dedicated to supporting institutional development projects, like judicial reform.

Even the limited amount of foreign aid appropriated for development and economic support to the region has not been free of problems. For example, the Department of Defense is responsible for its own development assistance account, blurring how funding is actually proportioned between security and development assistance. Although there are mechanisms in place that withhold a portion of U.S. foreign military aid until certain conditions are met, these conditions reflect U.S. immigration interests more than a U.S. commitment to promoting accountability: quite notably, 25% of the funds are subject to U.S. determination that Central America is making efforts to stop its citizens from leaving. And fifty percent are subject to the Northern Triangle’s progress on anti-corruption and other institutional efforts. Yet none of these programs guarantee protection for migrants, nor do they provide mechanisms of accountability to control how funds are dispersed.

Although Obama’s original proposal still included much of the police and military aid of the CARSI model, the package proposed in February 2015, rebranded as the Alliance for Prosperity in the Northern Triangle, aimed to triple foreign aid to the region. It originally included an additional $422 million of development assistance to address the push factors driving Central Americans to migrate in the first place: things like weak institutions, lack of educational and professional opportunities, and endemic violence. To be sure, the proposal was not all that radical; funding numbers still dwarfed in comparison to the astronomical amounts of money Obama has funnelled into the U.S. deportation regime. But proposing increased funding for development assistance seemed a step in the right direction.

When the proposal finally reached the House floor six months later, legislators significantly reduced the amount of money requested for development initiatives, while nearly doubling previous Department of Defense-designated funding for counternarcotics strategies that have proven time and again to be ineffective.  And Congress had already allocated the $79 million over Obama’s original request for the Mérida Initiative to secure Mexico’s southern border, which helped Mexican President Enrique Peña Nieto quickly implement Plan Frontera Sur. This track record does not bode well for future funding to the region.

As a result of Frontera Sur, Mexico increased border apprehensions of migrants from the Northern Triangle by about 40% — and nearly doubled deportations, according to Victoria Reitig, a policy analyst on Central American and Mexican migration at the Migration Policy Institute. Meanwhile, data from Mexico’s National Migration Institute (INM) points to even higher detention rates: in January and February 2015, the INM detained 28,862 migrants compared to 14,612 migrants for that same period in 2014 — an increase of around 98 percent. By pushing the problem of border crossings south, the U.S. has justified its failure to address the root causes of Central American migration.

“From an enforcement perspective, the SBP [Southern Border Plan] has been a success,” Reitig said. However, “From a human rights perspective, SBP has been much less successful.” According to the Migration Policy Institute, Mexico’s National Human Rights Commission (CNDH) recorded 268 complaints filed against the INM for violations of human rights at migrant detention centers during the first six months of Frontera Sur. In addition, stories of INM officials demanding bribes have been the topic of many news stories.

According to a recent report published by Georgetown University Law Center, many children entering Mexico are not screened for international protection by the Mexican government and are unaware of their rights to apply for asylum. “Migrant children are one of the most vulnerable populations,” wrote co-author Mary Nelson. “Yet, they are left to fend for themselves when asking for protection.”

U.S. officials have denied that Frontera Sur is a ploy to keep Central Americans from facing a judge in the United States, but it seems clear that the initiative has been a money-saver for the U.S. government— and a major political win for anti-immigration hardliners in Washington.

Since the $1 billion aid package arrived to Congress, it took the Obama Administration well over a year to provide any concrete plans to protect Central American migrants. Only in mid-January of 2016 did the U.S. government announce its own migrant protection program. Under the program, the U.S. has pledged to open additional refugee processing centers in Mexico, Belize, and Costa Rica in order to more efficiently assess refugee status claims for as many as 9,000 residents of the Northern Triangle. But even this effort has been mired in contradiction. At the same time the new processing centers were announced, the Obama Administration authorized the Department of Homeland Security to carry out a string of early-morning raids on hundreds of undocumented Central Americans residing in the United States.

Civil rights groups quickly denounced the raids as scare tactics meant to deter migrants from coming to the United States. These deportations, which then Senator Obama had been critical of, blatantly defy international norms that state that a person cannot be sent back to a country where they face threats to their life and person. Deterrence schemes, such as a multi-billion dollar public relations campaign sponsored by the U.S.-government last year to warn Central American parents of the dangers of migrating, do not address the validity or severity of violence these families face in their home countries. The message sent becomes: you’re not safe there, but you’re not safe here, either. While Congress continues to rebuke any efforts to focus on the structural factors motivating migration, the Obama administration has continued to adopt short-term, violent solutions that will do nothing to change migration patterns.

In June 2015, Assistant Secretary of State for Western Hemisphere Affairs Roberta Jacobson anticipated at least in part, the consequences of increased security aid without other reforms. As Jacobson told a group at the D.C.-based Wilson Center last June, “I fear… that Congress is only going to authorize the security part [of the Central America aid proposal] and say we don’t need the rest... And that is a recipe for disaster. Unless we do everything, we will fail. And we will have more migration crises.”

What Jacobson’s comments -- and actions of the Obama Administration more generally -- have avoided is the crux of the issue: the fact that it’s security aid itself that has exacerbated the region’s ongoing migration crisis.

The 2017 congressional budget justification, released February 9, in many ways echoes last year’s proposal, though the initial proposal for development aid is somewhat lower — at around $310 million for Central America’s Northern Triangle countries. As occurred last year, we can expect these numbers will be whittled down as the bill goes through Congress, while lawmakers eagerly go beyond budget requests for border enforcement. Past experience suggests that any tempered optimism about the direction of U.S. aid is as fleeting and incomplete as the mechanisms in place to protect Central American migrants.