Water is More Valuable than Gold

The destructive impact of metal mining in the Dominican Republic has lessons for neighboring Haiti, where activists are seeking a moratorium on all mining projects. 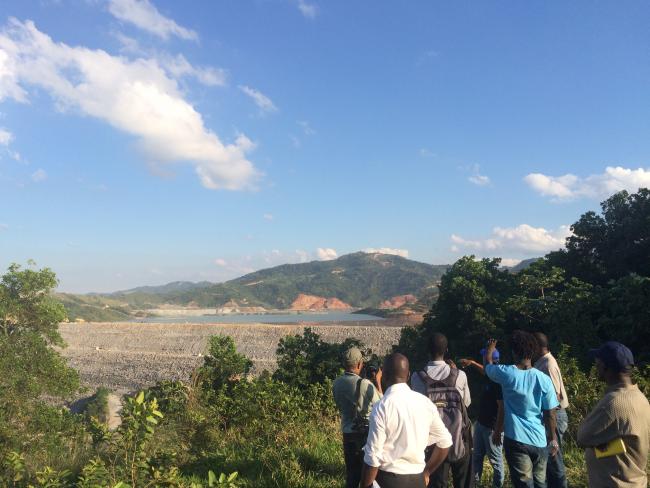 The hill overlooking the tailings pond—a vast, dammed tub of liquid residue—was littered with bones.  Residents from the area said the goats and cattle that once grazed the land had died since mining operations began a few years ago.  They held our hands as we crossed a river, directing us to jump from rock to rock to avoid plunging a foot into the polluted current.  The human settlements tucked in the valley beneath the white smoke snaking into the sky appeared to be the only life remaining in the area.  We were at Pueblo Viejo in the Dominican Republic, one of the largest gold mines in the world.

I am an attorney with the Global Justice Clinic (GJC) of NYU School of Law. Since 2013, GJC has provided technical support to the Kolektif Jistis Min (Justice in Mining Collective or KJM), a group of Haitian social movement organizations formed to support communities in Haiti’s mineral belt and to encourage a national dialogue about the industry.  In March, I traveled with members of KJM to the Dominican Republic to meet with organizations and academics studying the mining sector and with residents from communities directly affected by mining.

The message from residents of communities near Pueblo Viejo to Haitian activist was simple: Do not let a company build a gold mine in Haiti.  Farmers said that their coffee plants failed every year since operations began. The situation has become so dire that they no longer even bother to plant coffee and other crops that previously sustained them.  Parents spoke of rains that fall with such a peculiar stench that they pull their kids out of school and remain indoors with their families, windows closed, for a full twenty-four hours.

During our visit, a man lifted up his pant leg to reveal his calves, pock-marked like a burn.  He explained that the acidic river water had eaten away at his skin.

“We did not know that mining would lead to this,” said a woman, pointing to the wall of the tailings dam in the distance.

Residents showed us shelves of five-gallon jugs of water.  They explained that “the company”— Pueblo Viejo is operated by the Pueblo Viejo Dominicana Corporation (PVDC), a joint venture between the Canadian companies Barrick and Goldcorp— provides four jugs of water to local residents a few times a week, but complained that the water was insufficient to meet their most basic needs.  The sealed, treated water, they explained, is not just the only water safe to drink; it is the only water safe to use for any purpose, be it washing, bathing, or giving to animals.

Unfortunately, few scientific studies that document the contamination and its impacts have been made public.  PVDC claims to regularly test the water and the air quality, but residents told The Economist that they were unaware of such monitoring.  Meanwhile, the Ministerio de Medio Ambiente y Recursos Naturales (Dominican Ministry of the Environment) conducted water quality sampling that confirmed that the river downstream from Pueblo Viejo was found to be “highly acidic, with copper and other pollutants above legal limits.”  The test results were available only through a Freedom of Information Act (FOIA) Request.  There are numerous reported incidents of mine workers falling ill along with local residents.  PVDC claims that pollution in the area was caused decades ago by the previous operators of the mine. 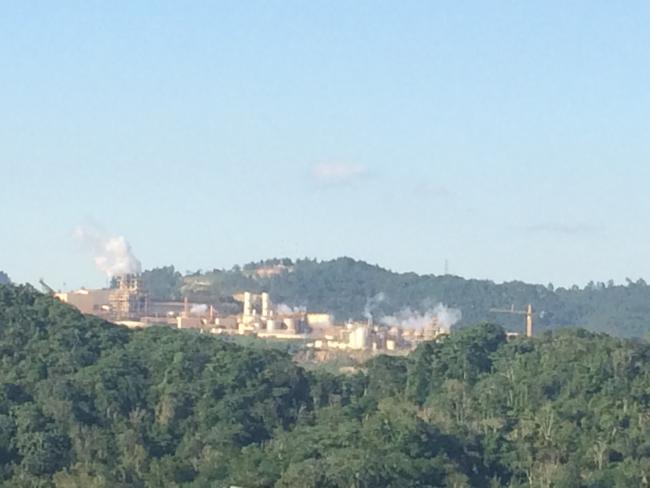 The refrain water is more valuable than gold has rallied Dominicans to declare Loma Miranda, the site of a potential nickel mine and also home to the headwaters of some of the Dominican Republic’s most important rivers, a national park.  Community members and allies maintain a permanent camp near the base of Loma Miranda.  They told the KJM that the water contamination at Pueblo Viejo and the mining industry’s mixed economic impacts to have led a diverse and broad cross-section of Dominicans to oppose the nickel mine.  As in El Salvador, Peru, and Guatemala, the experience of living in the shadow of an open pit mine has created determined resistance to future projects.

KJM is building a national network with the ultimate goal of preventing metal mining in Haiti for the foreseeable future.  “We must learn from these stories,” said a KJM leader who traveled to the Dominican Republic.  “We have an opportunity in Haiti to avoid a disaster.”

There are no active metal mines in Haiti yet.  But the Haitian government has declared the mineral sector key to the country’s economic growth and has encouraged foreign investment.  Between 2006 and early 2013, two Canadian and two U.S. companies reportedly spent more than $30 million on exploration for gold, copper, silver, and other metals.  For the past five years, company activity has been on hold as the industry awaits the adoption of a new mining law, a draft of which was written with World Bank technical support in 2014.  Because the political situation remains uncertain, however, legal changes are in limbo— and so too is the future of metal mining in Haiti.

Byen Konte, Mal Kalkile?  Human Rights and Environmental Risks of Gold Mining in Haiti, a report released in December by the Global Justice Clinic of NYU School of Law and the Haiti Justice Initiative at the University of California, Hastings College of Law, recommends a moratorium on metal mining in Haiti.   As the report concludes, mining projects often perpetuate global inequalities, with companies from the “Global North” extracting resources from the “Global South.”  It has become evident that communities near mining sites often lack the information and resources necessary to demand participation in decisions that affect their well-being, both in the immediate future and for generations to come.  Meanwhile, host governments often fail to equip these communities to assert their rights, leaving them to fend for themselves in the face of encroachment on their land and serious risks to the environment and human rights.  And Haiti is uniquely vulnerable to the consequences of mining.

Water is already scarce in Haiti— less than half of rural households have access to safe drinking water—and too often, its consumption causes illness.  More than half the annual death toll in Haiti is caused by waterborne illnesses, such as typhoid, cholera, and chronic diarrhea.  At least 10,000 Haitians have died of cholera, introduced to Haiti by United Nations’ troops ten months after the 2010 earthquake.  A recent study suggests that the official count of those sickened and killed by cholera far underestimates the actual total.  Cholera could have been avoided if the United Nations had taken simple, affordable precautions.  The environmental devastation that an open pit mine could cause in Haiti is also foreseeable and preventable.

As if Haiti’s pre-existing vulnerabilities did not present enough of a risk, the legal and institutional framework regulating mining in Haiti fails to adequately safeguard human rights and the environment.  As Byen Konte, Mal Kalkile shows, the draft new mining law co-written with the World Bank falls short of protecting rights guaranteed in the Haitian Constitution, including the right to a healthy environment, the right to property, and the rights to information and participation.  One proposed article— dangerously out of step with recent trends toward greater industry transparency— would require all mining-related information to be kept confidential for a period of ten years, effectively foreclosing meaningful public oversight of mining activities and regulatory compliance. As the Haitian proverb goes, Konstitisyon se papye, bayonet se fe— the Constitution is made of paper, the bayonet is made of steel.

Even in countries with more robust governance and oversight than Haiti, industrial-scale mining has contaminated water resources, destroyed livelihoods, increased security threats, forcibly displaced thousands of people, and damaged entire ecosystems for generations. Recent mining disasters in Brazil and the United States provide sobering reminders of the tremendous risks that Haiti faces and the enormous challenge of preventing mining-related harm.

On top of all this, Haiti is one of the countries most vulnerable to natural disasters.  Earthquakes, hurricanes, floods and drought regularly ravage the nation, and the government demonstrates a lack of capacity to anticipate or mitigate these disasters.  Haiti is densely populated and mountainous—nearly two-thirds of the land is too steep to till.  In February, the World Food Program declared a food crisis, reporting that over 3.6 million Haitians face food insecurity and more than 1.5 million live with severe food insecurity.

“Maybe, for once, the state of our environment can work in our favor—can help us resist,” explained a resident from the north of Haiti, where a transnational company has explored for gold.  “We understand, maybe more than others, that water is life.  When we hear what has happened in other countries, when we see the videos and see the photos, we understand that our land cannot take one more blow.”

In early May, activists from communities affected by metal mining in Peru, El Salvador, Colombia, South Africa, the Democratic Republic of Congo, Mexico, and the Dominican Republic will converge in Haiti to participate in Kale Je Nou pou Defann Lavi Nou (Open our Eyes Wide to Defend Our Lives), ten days of action and dialogue about the mining sector.  KJM hopes that little by little they can build an alliance to resist metal mining without having to suffer through it first.

Ellie Happel is the Haiti Program Attorney with the Global Justice Clinic of New York University School of Law.  She is based in Port-au-Prince, where she has lived for the past four years.  Ellie is also co-author of Byen Konte, Mal Kalkile?  Human Rights and Environmental Risks of Gold Mining.