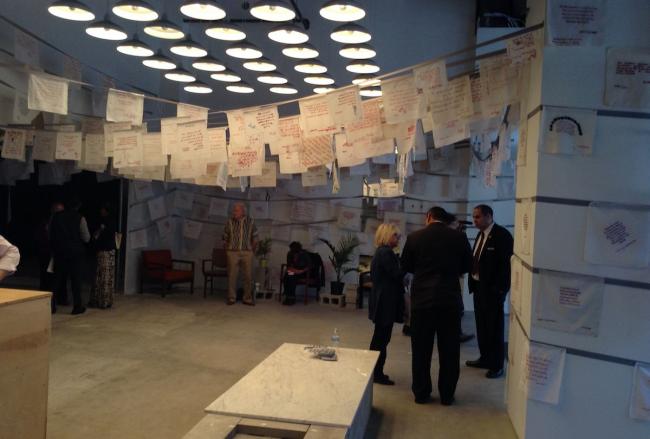 Clotheslines canopied the entrance of the Museum of Drug Policy, a pop-up installation in midtown New York City that was erected during the 2016 UN General Assembly Special Session on drugs (UNGASS) last week. 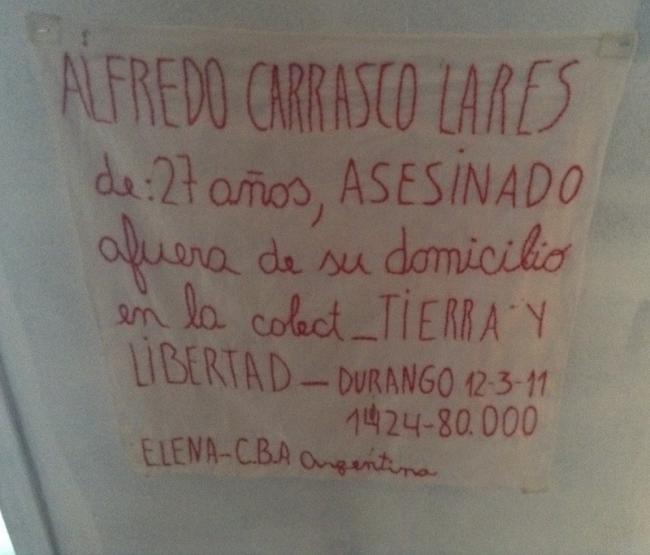 Each line was draped with handkerchiefs embroidered with messages like: “The cadaver of a man was found this afternoon in a canal in Zaragoza near the freeway – Juárez Porvenir, Ciudad Juárez, April 3, 2011,” and “Alfredo Carrasco Lares: 27 years old, murdered outside of his home, from the Earth and Freedom Collective – Durango, 3-12-2011.”

The installation was one of several art displays at the Museum, each detailing the devastating impacts of the nearly five-decade-long “War on Drugs.” In an interactive section, one visitor wrote, “I demand drug policy reform now because the war on drugs, a militarized security strategy, has resulted in serious human rights violations in Mexico and Central America.”

The Museum also considered mass incarceration in the U.S., harm reduction strategies, and the production of opium in Afghanistan and coca in the Andes in the context of global economy. A mock prison-cell had gates slamming, while an interactive collage invited attendees to document how their communities had been affected by the War on Drugs. In the background, a television provided a livestream of the UNGASS proceedings. One particularly disturbing short film showed a boy in the desert digging a grave, blindfolding himself, and kneeling down as if preparing to be shot. 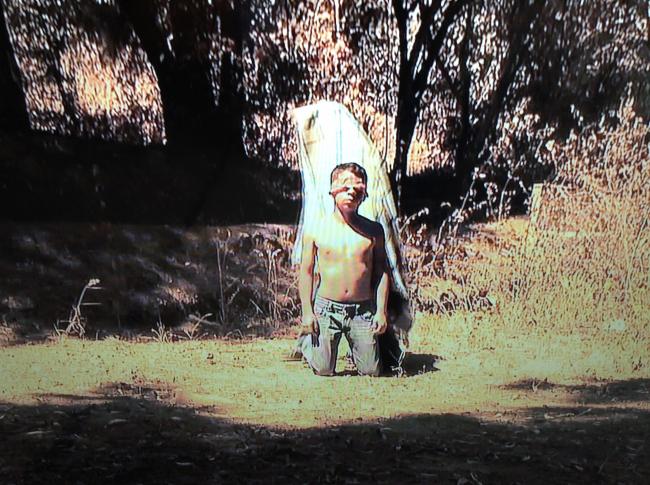 Extrajudicial killings of civilians, which the short film alluded to, are one consequence of the U.S.-led bilateral Mérida Initiative, which since 2007 has provided over $2.6 billion to Mexico in the name of combatting drug-trafficking organizations. The package strengthened military and federal police forces in Mexico through training in counterdrug operations, providing security equipment and arms, and fortifying the U.S.-Mexico border. Since 2007, violence levels in Mexico have shot up. Since 2006, over 25,000 people have been recorded as missing, and at least 80,000 have been killed.  The State Department reports extrajudicial killings, torture, and disappearance as commonplace within the Mexican armed forces.

Allegations that the disappearance of 43 students from Ayotzinapa Rural Teachers College in Iguala in September 2014 involved security forces who had received training or funding from the United States were strengthened when the Independent Group of Experts tasked with investigating the case concluded that members of the federal police, an elite force created at the inception of Mérida, were present during the torture and disappearance of the students.

Members of Mexican civil society followed President Enrique Peña Nieto to UNGASS, where they set up posters, photographs, and a Mexican flag in front of UN headquarters. “Enrique Peña Nieto, Where are the 43 Ayotzinapa Students???” one poster read. The protestors argued that disappearances, criminalization, and militarization were intimately connected components of the Drug War. “The President should have the security of his citizens in mind, and yet, he has done nothing,” one protestor said. “When people ask who it was [who disappeared the students], the answer is clear: It was the government.” 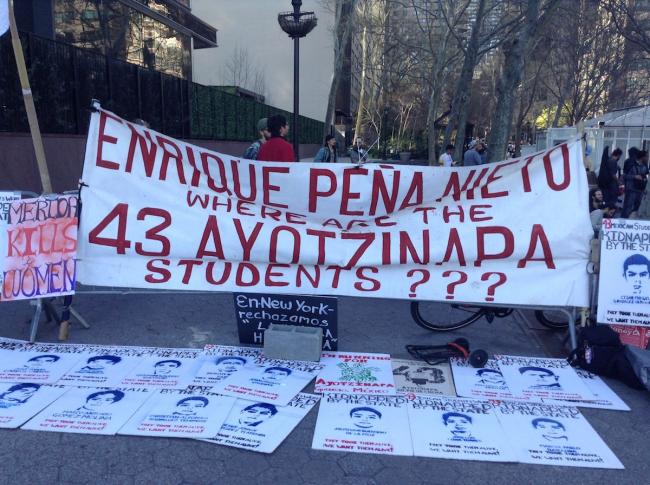 Mexican President Enrique Peña Nieto initially stated he wouldn’t attend UNGASS. Peña Nieto’s UN speech advocated for the decriminalization of medical marijuana, and noted the especially harmful effects of prohibition in Mexico. "Illegal trafficking of narcotics has caused violence and death, primarily in the producing and transit countries," he said. "For decades, Mexico has been one of the countries most committed to the problem of drugs. My country has paid a high price, an excessive price, in terms of peace, suffering, human lives. We know the limits and painful implications of the prohibitionist paradigm."

While Peña Nieto's words were striking, he failed to mention the role of police and military impunity and complicity with drug cartels. Days before, the Inter-American Human Rights Commission (IAHCR) had announced that the Independent Group of Experts investigating the Ayotzinapa disappearances would abandon its investigation. The protest at UNGASS denounced this decision and criticized Peña Nieto for refusing to meet with civil society groups while in New York.

One of the most striking events surrounding UNGASS was the Caravan for Peace, Life, and Justice, which traveled from Tegucigalpa, Honduras to New York City by bus to demand alternatives to the War on Drugs. Some 800 people participated along the Caravan’s journey, with 35 reaching New York. It included family members of the disappeared, human rights activists, artists, academics, journalists, and therapists, representing Honduras, El Salvador, Uruguay, Mexico, the United States, and Colombia. The caravan echoed a travelling caravan led by parents of the disappeared Ayotzinapa students in 2014, and the Caravan for Peace, led by Javier Sicilia in 2012. This year, stops included La Esperanza, Honduras, where members of COPINH, the Honduran environmental rights organization still reeling from Berta Cáceres’ murder, joined the caravan. The caravan also stopped in San Salvador and Iztapulas, Guatemala, as well as Guerrero, Iguala, and Mexico City, where tens of thousands showed up for a benefit concert calling for an end to the War on Drugs. 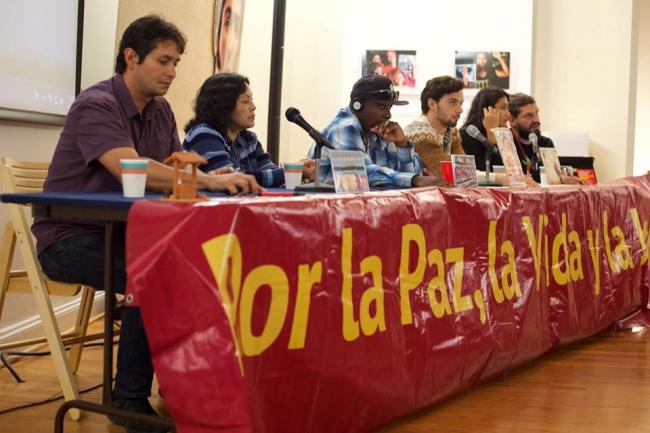 Members of the Caravan spoke at a public event in Washington, D.C., on April 16, including Maria Herrera, a mother from Tamaulipas whose four children, including a son-in-law, were disappeared. She did not hesitate to connect the disappearances with state-level policies of militarization and criminalization.  “The government is destroying us,” she asserted, her voice ragged with tears. “They didn’t disappear, they disappeared them.”

The panel featured Alex Sierra, a Colombian anthropologist; Felix Valentín, a member of the Black Honduran Brotherhood Organization (Organización Fraternal Negra Hondureña, OFRANEH); Martin Collazo, a Uruguayan human rights activist; Aleida Almendarez, a lawyer and faith-based organizer from El Salvador; Andrés Hirsch, a Mexican activist with the ReverdeSer Collective; and Vicky, a mother from Tamaulipas whose son was disappeared along with eight of his coworkers 16 years ago.

“Drug policy doesn’t mention violence,” Sierra said. “But when we talk about militarization and criminalization, we are talking about the same thing.”

Collazo agreed, emphasizing that drugs are an excuse to justify police violence. “It’s structural machismo,” he said, “and there needs to be a cultural shift.” He used the legalization of marijuana in his own country as an example of what such a shift could begin to achieve.

Valentín, an indigenous Garifuna, saw profit as a key motivator for the War on Drugs.  The war was not waged to rid the region of drugs he said, but for transnational companies to protect their investments. Throughout the war, he has seen a pattern of militarization and expropriation in resource-rich areas. “The war on drugs is false,” he said.

Almendarez, the Salvadoran lawyer and member of Communities of Faith Organized for Action (Comunidades de Fe Organizadas para la Acción), connected gang violence to militarization. After the end of El Salvador’s decades-long civil war, a combination of U.S. expatriation of Salvadoran immigrants with criminal records, easy access to arms and drugs, precarious employment, and persistent poverty created the current spike in violence. Today in El Salvador, a person is murdered every hour. Militarization in the name of the Drug War has only made things worse, Almendarez said. It provides no solution to any of the long-standing problems in her country, nor does it help to demobilize and reinsert gang members into society.

Andrés Hirsch, a member of the ReverdeSer Collective, a network of families searching for their missing children from 18 states in Mexico, closed the panel in Washington. He concluded that prohibition is more harmful than drugs themselves. He compared what is happening in Latin America to mass incarceration in the United States, citing the scholar Michelle Alexander’s assertion that drug policy is designed to exclude the hundreds of thousands of African American men imprisoned on minor drug infractions from society. At its core, he said, the War on Drugs is a permanent war without an exit strategy. “Regardless of any harm produced, drug users don’t warrant a bullet or a disappearance.” 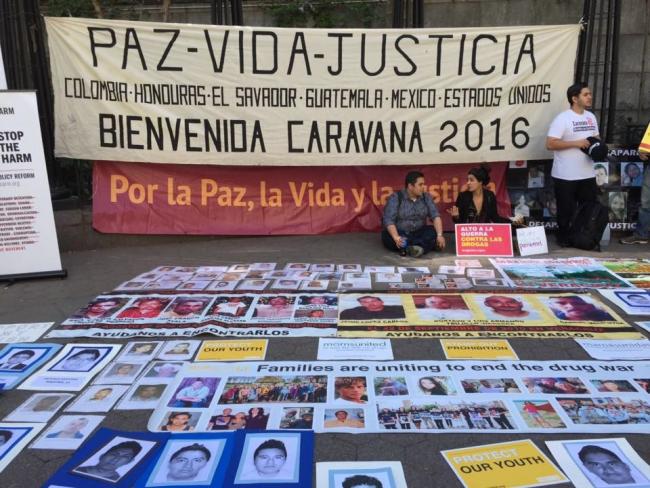 Following the Washington panel, the caravan continued its journey towards New York, where they arrived in Foley Square on Monday afternoon. Over 100 people showed up to protest, including members of the New York-based nonprofits Stop the Harm and Drug Policy Alliance. The Caravan also teamed up with the Interfaith Service of Compassion and Care at the Abyssinian Baptist Church in Harlem. Alongside African American faith-based leaders, the group denounced the failures of the Drug War and offered words of solidarity to the Garifuna community in Honduras.

Laura Carlsen, director of the Americas Program, who helped organize the caravan, told Vice News, “What we discovered during our journey was the official line, the lie, is falling.” Carlsen conceded that the caravan would not affect the decisions of UNGASS because of entrenched interests linked to the Drug War around the world.

Carlsen may be right. After all, while UNGASS was meeting, the U.S. Congress was discussing 2017's iteration of Vice President Joe Biden’s proposal for a U.S. contribution to the Alliance for Prosperity of $750 million, which would continue the militarization of Central America.

However, shifts, at least in rhetoric, have become increasingly notable in the public sphere. Earlier this year, former Presidents Henrique Cardoso of Brazil, Ernesto Zedillo of Mexico, and Cesar Gavira of Colombia, all members of the Global Commission of Drug Policy, wrote an Op-Ed in the Los Angeles Times against failed Drug War policy. Current Colombian President Juan Manuel Santos wrote an article in The Guardian days before UNGASS calling for an alternative to prohibition. U.S. Representative Earl Blumenauer (D-OR) commended the Peace, Life and Justice caravan in a press statement released April 18: “I salute those from Central America caravanning to the United Nations to highlight how far off-track American drug policy has become,” he said. “There are far more effective, humane, and less costly approaches focused on helping—not victimizing—the poor, and reducing—not escalating— horrific violence.”

While the results UNGASS fell unfortunately behind the efforts of civil society to produce substantive policy changes, increasing consensus between world leaders and civil society actors is a promising sign that the drug war, so institutionalized in the fabric of the modern world order, may soon begin to unravel.