The first meeting in twenty years of the UN General Assembly Special Session on Drugs (UNGASS) was supposed to be a game changer. It was not.

This article is part two in our series on UNGASS 2016. Please click here to read part one. 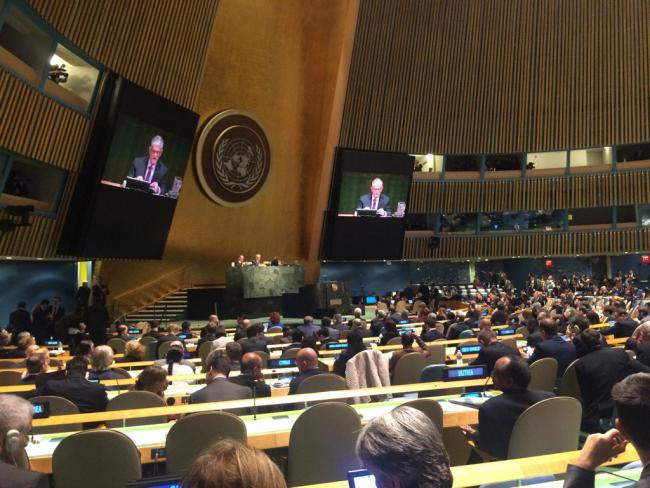 “So how disappointed am I?,” Kasia Malinoska-Sempruch asked a crowd of civil society representatives that had gathered for the UN Special Session on Drug Policy (UNGASS) last week in New York. “The outcome is not ideal. But at least it advances access to pain medications for the terminally ill worldwide.”

Malinoska-Sempruch, who directs the Global Drug Policy program at the Open Society Foundations (OSF), was visibly exhausted after 18 months of civil society preparations for UNGASS. She may have put a brave face on it – at present, three quarters of the world's countries fail to provide adequate access to prescription pain medicines – but her disappointment, and the frustration and disappointment of the many who had gathered in New York for the UN meetings, was palpable.

The first meeting of UNGASS since 1998 was supposed to be a game changer in prodding the lumbering and often draconian UN drug policy regime into serious revision. Mass incarceration of the poor, corruption, human rights abuses, public health crises and violence caused by the Drug War have been exhaustingly documented all over the world. According to UN research, the negative impacts fall disproportionately on indigenous communities, people of color, women and children. Although about $100 billion is spent on counter-narcotics efforts every year, the illicit trade spirals upward with its current value estimated at between $300 billion and $500 billion a year. But in the end, the UN Special Session came up short in meeting the expectations of drug policy reformers from around the globe.

The UNGASS meetings got off to a bad start for non-government organizations, community organizations and the general public. After pre-registering online for a UN-sponsored civil society forum, hundreds of people from all over the world showed up early on April 18th to pick up their credentials. Most of them, many of whom had travelled internationally to attend the forum, were told they couldn’t even participate because there were only seats for 130 people.

But, even if more civil society groups had been granted access, the outcomes would not have differed. According to Coletta Youngers, a Senior Fellow at the Washington Office on Latin America and consultant with the International Drug Policy Consortium (IDPC), the UNGASS resolution was actually drafted a month earlier, by a select number of member states behind closed doors, during the annual meetings of the UN Commission on Narcotics Drugs (CND) in Vienna. This reflects a disturbing trend in UN drug policy meetings: consensus is so hard to come by that documents are hammered out before the actual meetings and are designed to avoid controversy, approved (as this one was) immediately after meetings open, with negotiations controlled by the CND in a process that is anything but transparent and participatory.

Similar to other recent UN resolutions, the 23-page document allows escape clauses for each country, stating that measures should be applied “in accordance with national legislation” and “as appropriate.”The document reiterates the three existing and heavily prohibitionist UN drug conventions as the foundation guiding worldwide policy. It resolves to “actively promote a society free of drug abuse.” Hoped-for decriminalization of drug use, hard-hitting measures against money laundering and respect for indigenous use of psychoactive plants such as coca, marijuana and peyote are no where to be found in the UNGASS resolution. And although there is improved language on human rights, gender, and public health, the document fails to acknowledge that around the globe, drug policy is changing rapidly.

Even getting to this compromise document involved strained negotiations. At the March 2016 CND meetings in Vienna fierce debate raged over proportionality of sentences, alternative development, indigenous rights, access to controlled medicines, the death penalty, and UN system-wide coherence, triggering concern that countries would scrap their commitment to the document before it ever got near the General Assembly. Russia, for example, the only member of the Security Council opposing public health approaches to drugs, objected to any incorporation of harm reduction language in the outcome document, in opposition to UN agencies like the World Health Organization (WHO).

Because of this, the UN process was widely criticized by 195 civil society organizations that work on drug issues worldwide. “Given the highly problematic, non-inclusive and non-transparent nature of the preparatory process, the UNGASS is now perilously close to representing a serious systemic failure of the UN system,” their March 13th statement read. “This would represent…. a betrayal for the member states, UN agencies, civil society, and public who have demanded so much more.”

Among the most notable absences in the UNGASS document was the issue of harm reduction—that is, the belief that drug use and production are inevitable in human societies and will never be eradicated. As worldwide, only 11% of all users become addicted, harm reduction policies policies aim to diminish the negative consequences associated with drug use, such as the spread of AIDS and overdose. Almost half of the world’s countries use harm reduction strategies in some aspect of their national drug policies, according to Donald MacPherson, the Executive Director of the Canadian Drug Policy Coalition. The Coalition has found positive correlations between Vancouver’s supervised injection site, which offers a comprehensive multiple service health care setting, and reductions in overdose-related death, infection, and arrest.

Many expected that changing regulations of cannabis in several countries around the globe would be an impetus for change in this round of UNGASS. Shifting public attitudes, particularly in North America, have heralded the legalization of marijuana in four U.S. states and the District of Columbia (with limitations), and 20 have legalized its use for medical purposes. Uruguay legalized marijuana in 2013, and Canada announced plans at UNGASS to legalize by 2017. Even the U.S. is out of compliance with the very UN conventions on drugs it has championed for decades.

In a surprise move, as he is usually conservative on drug issues, Mexican President Enrique Peña Nieto announced at UNGASS his support for medical marijuana, becoming the first sitting Mexican president to do so. He told the gathering that groups in Mexico have shown "the need to lift, in accordance with international standards, the amount of marijuana that can be considered for personal use, with the purpose of not criminalizing users.” Details of the new policy are slated to be released within a week.

For Coletta Youngers, three positive trends did emerge from the meetings. “There was an unprecedented international and regional (at least in Latin America) debate leading up to it. It is now very clear that what is referred to as the ‘Vienna consensus’ in support of the present international drug control regime is no longer,” she says.  “Second, for the first time other UN agencies weighed in on drug policy issues. The reports by the UNDP and the Special Rapporteur on Human Rights begin to put a wedge into the tightly controlled bureaucracy.” Finally, Youngers notes that progressive civil society proved itself to be “extremely well organized and engaged.”

Drug policy reformers are already looking ahead to the next meeting to review UN drug policy, called for 2019. “The frustration coming out of UNGASS 2016 can serve as a catalyst for broader systemic change,” says Kathryn Ledebur of the Andean Information Network, “but it going to be slow.”

Linda Farthing edited NACLA’s July 2014 Reimagining Drug Policy in the Americas. She is author of Habeas Coca: Bolivia’s Community Coca control, field produced the film Cocaine Unwrapped and wrote a drug policy curriculum for high schools. She is co-author of three books; the most recent is Evo’s Bolivia: Continuity and Change (Texas, 2014).