NACLA joins Honduran and international human rights groups in demanding the material and intellectual authors behind the May 2 shooting of journalist Felix Molina be investigated and prosecuted. 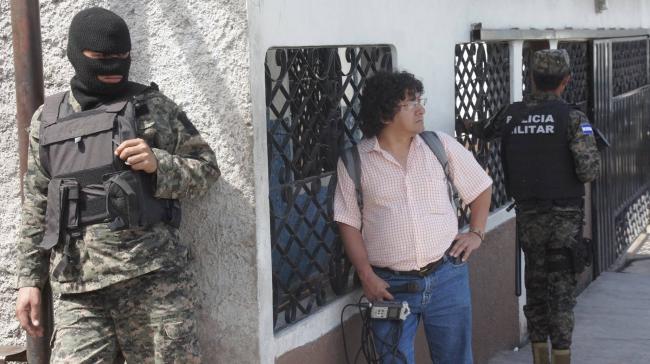 The NACLA community expresses its outrage at the shooting of Honduran journalist Felix Molina, 2012 winner of our Chavkin Award for Integrity in Journalism in Latin America. We join Honduran and international human rights organizations in standing in solidarity with the renowned communicator and activist.

On the evening of Monday, May 2 two men on a motorcycle intercepted the taxi where Molina was riding after hosting his community radio program Resistencia. According to Molina’s own account, one of the men pointed a gun at him, and after saying “de hoy no pasas,” opened fire. While he managed to move away from the assailant, four bullets hit Molina’s legs.  To date, Molina remains in the hospital recovering from his wounds.

The shooting was in fact Molina’s second violent encounter of the day. Earlier, en route to his radio program, Molina narrowly escaped another attack when a separate armed pair aboard a motorcycle attempted to steal his phone. Via a Facebook post recounting the episode, Molina observed: “ufff, el país que habitamos.”

Molina has not speculated on the motives behind the attempt on his life. But since the 2009 coup that ousted President Manuel Zelaya, Honduras has become one of the world’s most dangerous places for independent journalists and progressive activists.  Most recently, the assassination of environmental activist Berta Cáceres brought international attention to the struggles of everyday Hondurans who face persecution, intimidation, and assassination for their work in support of indigenous, peasant, civil, and economic rights.

Molina himself has been the subject of numerous death threats due to his critical reporting. As NACLA noted in 2012 when presenting him with the Chavkin Award, Molina “travels the country interviewing organizers of the anti-coup resistance in communities that better-funded news programs ignore. His work has earned him numerous death threats via text message, as well as frequent calls (which he resists) to run for political office.” On the morning of the shooting, Molina had published a piece denouncing collusion between military officers, business executives, and political leaders around a controversial dam project in the Gualcarque river, further raising questions about what interests may lie behind this latest, and thankfully unsuccessful, act of violence against the award-winning communicator.

We reiterate our strongest condemnation of this act, and call upon Honduran authorities to investigate and prosecute both its material and intellectual authors immediately. In solidarity!