Twenty five years after its founding, School of the Americas Watch expands its work to the border.

The following article comes from the "Report" section of latest issue of the NACLA Report on the Americas, "Solidarity Pa' Siempre!" 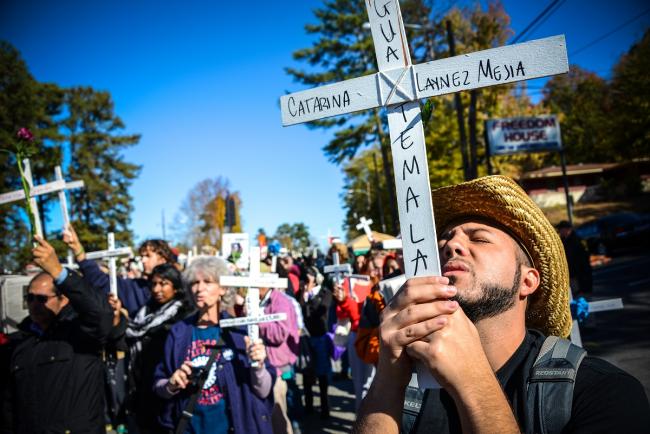 Established in 1990, School of the Americas Watch (SOAW) has long been a leading voice against the militarization of U.S. foreign policy in the Americas. In this Q&A with NACLA, María Luisa Rosal and Arturo J. Viscarra, two SOAW organizers, discuss the past, present, and future of the organization’s solidarity work. In particular, they highlight the movement’s recent decision to rethink its organizing strategy. SOAW is currently organizing its first-ever Border Vigil, to be held in Nogales, Arizona from October 7-10, 2016, in addition to continuing its annual vigil outside the Georgia-based School of the Americas.

WHAT WAS THE POLITICAL CONTEXT IN THE UNITED STATES AND LATIN AMERICA WHEN SCHOOL OF THE AMERICAS WATCH (SOAW) WAS CREATED? AND WHAT DOES U.S. MILITARISM IN LATIN AMERICA LOOK LIKE TODAY?

MARÍA LUISA ROSAL (MLR): The SOAW movement was sparked by a vigil held in November 1990 at the gates of Ft. Benning (the home of the U.S. Army School of the Americas, which in 2001 was renamed the Western Hemisphere Institute for Security Cooperation, or WHINSEC). The vigil occurred on the first anniversary of the University of Central America (UCA) massacre in which six Jesuit Priests—along with their housekeeper, Elba, and her daughter, Celina—were brutally murdered. It was a direct response to what was happening in El Salvador during that country’s civil war—a conflict that the U.S. fueled to the tune of nearly $1 million per day. A U.N.-sponsored truth commission report would later find that two-thirds of the military responsible for human rights violations were trained at the Georgia-based School of the Americas.

At the end of the Cold War, during the period of transitional justice throughout Latin America, families and survivors began to push for memory, truth, and justice in the new context of democracy. At the same time, this new period was marked by the aggressive implementation of neoliberal economic policies, which became a false indicator of democracy and development in Latin America. The way in which the U.S. continued to intervene in the region changed, but it never disappeared. On the contrary, Latin America has never ceased to be of geopolitical interest to the U.S. We cannot talk about what is happening in Latin America today as something different or disconnected from the Cold War logic or the National Security Doctrine that was implemented throughout Latin America by military force. Whereas during the Cold War, state violence was carried out through massacres, coups, disappearances, and torture, today the low-intensity warfare is carried out in the form of USAID development packages, free trade agreements, extractivist projects, and security aid. This makes the enemy a much more elusive target to confront.

ARTURO J. VISCARRA (AV): Although the U.S. continues to aggressively isolate, destabilize, and even occasionally help topple leftist governments (e.g. Honduras), the escalation of the U.S.-backed Drug War has exponentially increased violence in the region. The Drug War has been raging for decades, but it has now become the primary tool for the U.S. to impose its will upon Latin America and the Caribbean. It is an escalation of, and a smokescreen for, U.S.-led militarization, although it is a much more surreptitious model of imperial violence than the conflicts of the Cold War.

WHAT ARE THE CURRENT CHALLENGES SOAW IS FACING AS A MOVEMENT? IS THE SCHOOL OF THE AMERICAS STILL RELEVANT TODAY?

AV: The School of the Americas remains very relevant. Although the Pentagon has diffused the training it once conducted primarily at the SOA, the School remains operational and its legacy has multiplied through other forms. For example, Colombia has been the SOA’s number one client since Plan Colombia was implemented in the early 2000s. Colombia is now a major trainer of Latin American security forces, particularly in Mexico and Central America, working side-by-side with the U.S. to spread the ideology and tactics that have been taught at the SOA and other institutions. But those that agitate for the closure of the SOA have always understood that the problem is larger than the SOA itself. That is, we have long maintained that the School is a symbol of the larger structures of control that exist both through military relations and economic exploitation.

MLR: We know that military training continues, not only at the SOA but at many other training sites across the U.S. as well. We also know that we are not just up against military training; U.S. economic and foreign policy are shaping the landscape of Latin America. While SOAW began as a movement to close the SOA—no matter its formal name—the movement grew by the understanding that in closing the School, activists were also challenging the very idea it represents. The eventual closure of the SOA will be a symbolic victory, and it will be a moment for celebration. It will also be the beginning of a new moment for us to identify, expose, and shut down all military training centers for Latin American military and police officers. Equally important to our work, after all, is the second part of our mission statement, which challenges us “to change oppressive U.S. foreign policy that the SOA represents.”

A major challenge is placing the SOA and the evolution of military training in its proper context. In order to adequately do this, we desperately need more research on U.S. military and police training in Latin America and the U.S. Until 2004, we had access to the names of all SOA graduates, including their country of origin, rank, and courses taken. This allowed us to link graduates to human rights violations throughout the region. Such information has since been withheld by the U.S. government, despite having won a lawsuit against the Obama Administration in 2013. We know so little at the current moment due to an intentional lack of transparency. Our research efforts remain a crucial part of informing the movement and tracing the evolution of the SOA and the expansion of military training in Latin America today. We are at a critical moment where we must challenge ourselves to think about newer and more creative strategies to close the SOA and challenge U.S. militarism.

We also need to reconsider the ways in which we engage newer and younger people, as there seems to be an overwhelming amount of apathy toward believing we can actively and collectively change U.S. foreign policy.